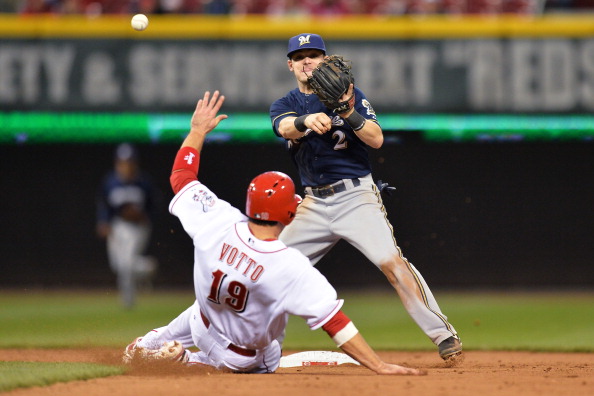 Ah, the bipolar days of early May.

My adopted hometown of Longview, Washington, is 85 degrees and sunny today. By Sunday, it’ll be mid-50s accompanied by that famed Northwest rain. Here’s hoping you invested in a diverse wardrobe.

In the Major League Baseball realm, however, things are starting to level off. We’re edging around the corner of “it’s early” to “good lord, we’re 10 games out of first place already?”

The 25-and-change game-mark is as good a time as any to debut our new series, the NL Central Heat Check.

1. Milwaukee Brewers (20-9) Heat check: The galaxy-melting blaze of a thousand dying suns.
Avert your eyes—do not look directly at the white-hot glare of the Brew Crew if you ever want to gaze upon the emerald green of a baseball field ever again. Milwaukee is 11-3 (!) on the road, even with the loss in Cincinnati last night. They have taken six out of seven against a Pittsburgh team universally picked above them in the standings and traded wins with the St. Louis juggernaut. Regardless of whether you root for them and their steroid-use-denier/user superstar, the Brewers will melt your face off.

2. St. Louis Cardinals (15-14) Heat check: A still-preheating oven on its way to 350 degrees.
Yeah, the Redbirds likely planned on having a few more of those Ls tossed in the other column at this point. There haven’t been any real warning signs, though, and those narrow defeats they’ve strung together will balance out over time. St. Louis will rip off the occasional hot streak and might fall into a rare slump, while in the end still consistently-if-unspectacularly racking up the Ws—a real break from the Cardinal Way, I know.

3. Cincinnati Reds (13-15) Heat check: A forgotten glass of water left on the counter for a few hours.
I mean, I guess this is kind of what we expected, right? Very few frills, nibbling around on the edge of the race for the second wild-card spot—just below .500 on the road, even at home, 5-5 in their last 10. Votto has been … OK? The rotation has been … acceptable? Man, this season has been boring—give me a few more Brewers-Pirates-style throwdowns, at least.

4. Pittsburgh Pirates (10-18) Heat check: Mid-October in Siberia.
Any kind of reference to Russia’s legendary land of banishment immediately sounds like panic-button-pushing hyperbole. Pittsburgh’s start has been quite chilly—the offense punchless, the back end of the bullpen destructive. Nothing like getting punked by your bizarrely-bitter, geographically-questionable rivals to wipe the shine of that playoff berth. But lovely Novosibirsk is actually a bearable 45 most days in October. So relax, guys.

5. Chicago Cubs (9-17) Heat check: Wrigley Field bleacher seats early in the season.
The 2012 MLB season was just a few weeks old the one and only time I’ve ever made it to the Friendly Confines. We didn’t even arrive until the third inning and I was chilled to the bone by the fourth. There was a slight mist in the air and wind blew into our faces from the general direction of home plate. Aroldis Chapman of the visiting Reds wore a beanie and spent the game motionless beneath what looked to be four layers of coats.

Yeah, that sounds about right.