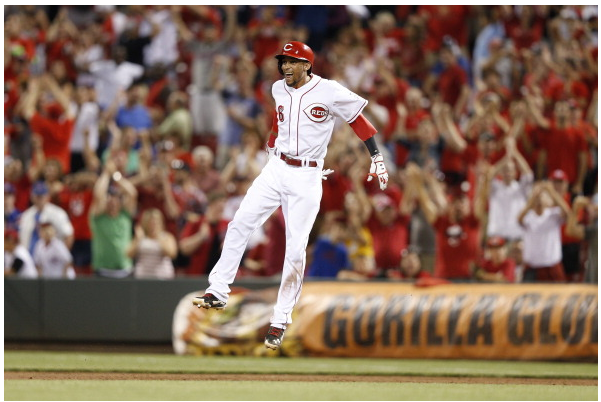 I think it’s safe to say the Cincinnati Reds have underachieved so far this season. With five games remaining before the All-Star break, the club is hovering just above .500 (48-42) and in third place in the NL Central, 3.5 games out of first. Though, as recently as yesterday morning, they were five games back and in fourth place. On July 1 they were 7 back after dropping two in a row to fall to 43-40. On June 18—less than a month ago—the Reds were eight back and three games UNDER .500, the only thing keeping them out of the cellar being the Chicago Cubs.

Yesterday was (and could potentially be) a huge day for the Reds in terms of the overall season. In a doubleheader sweep of the Cubbies, they gained 1.5 games on the first-place Brewers and hopped the Pirates for third place in the Central, only half a game behind the Cardinals and one game back in the Wild Card race. And while beating the Cubs, even twice in one day, really isn’t all that impressive, it was the way it happened that should have fans smiling like a college girl in a Brandon Phillips selfie.

It was fairly obvious yesterday that the Reds were banking hard on taking the first game of the day-night doubleheader. Not only did they start their ace (Johnny Cueto), but they also caught him with their best hitter (Devin Mesoraco), knowing that neither Mesoraco nor backup Brayan Pena (nagging forearm injury) would be available to catch for game two. Plus, they ended up using Aroldis Chapman to pitch the 9th and earn the save in a 4-2 win.

So when manager Bryan Price rolled out minor-league call-up David Holmberg to start the nightcap—having racked up a 5.28 ERA, 1.85 WHIP, and .319 batting-average-against in 10 Triple-A starts—along with backup-backup catcher Tucker Barnhart (.133/.188/.233), it didn’t exactly suggest a sense of desperation. Neither did the string of relief pitchers employed after Holmberg predictably got ruffed up to the tune of five runs in 2.2 innings: Carlos Contreras (who had only two innings under his belt for the season), followed by JJ Hoover and Logan Ondrusek and their combined double-digit ERA.

But then things got weird…in a good way. The Contreras-Hoover-Ondrusek jab-jab-punch combined for a scoreless 6.1 innings, allowing only four hits, three walks, and striking out eight. Meanwhile, the Reds offense managed to scrap together a few ugly runs, putting four on the board through the 5th, 6th, and 7th with a combination of a Cubs throwing error, a couple groundout RBIs, and one desperately needed Billy Hamilton triple. In the 8th, with the Cubs doing pretty much whatever they could to choke the game away, Jay Bruce tied it with a clutch double—on the heels of a homer in the first game of the day and another the night before. Hamilton finished things off in the bottom of the 9th, his game-winning hit the last of back-to-back-to-back singles plating pinch-runner Mike Leake as fireworks exploded over the Ohio River.

Again, it was only one day. There are still 72 games left in the season (and sadly, they aren’t all against the Cubs). Joey Votto could be out for an extended period of time—if not all of it, knowing how the Reds tend to report player injuries. But perhaps those two games yesterday can help Bruce get off the struggle bus for the second half of the season, and continue to stoke the flames that have engulfed Hamilton these last six weeks. Maybe there really is something to the fact that the Reds are 22-11 when Skip Schumaker is in the starting lineup. (Who the hell knows?!?) Maybe Ondrusek and Hoover and Manny Parra and Sam LeCure will improve, simply because it’d be tough for them to get worse. I don’t know. But I do know that the Reds have yet to really put it all together through the first 90 games of this season, and they’re only 3.5 games out of first place.