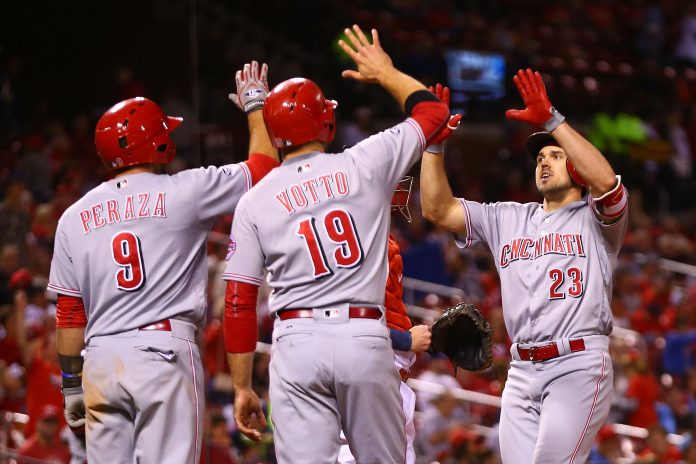 Remember those old highlight videos that teams used to produce years ago? The 1990 Reds had one called “Wire to Wire,” and I wore out my copy of the 1990 World Series highlights. After the current Reds season that is now—mercifully—drawing to a close, I’m thinking about putting together a highlight reel that tells the story of this year’s club. It’ll be available only on VHS (obviously), and I already have a name for it:

“The 2016 Cincinnati Reds: Precisely What Did You Expect?”

Might need to add a hashtag or a Harambe meme or something in the title, but once I figure out the marketing specifics, I’m sure it’ll sell like hotcakes. (Mmmmm…hotcakes.) After all, this is a season that we’re all going to want to re-live, right?

Actually, there are some things about the 2016 season that we’ll want to remember—more on that in a minute—but mostly we’re going to want to bury the details of this campaign as deep in the back of our collective brains as possible. I want to forget that first-half bullpen and poor, injured Devin Mesoraco. Alfredo Simon was very likely one of the five worst pitchers in Reds history, but he wasn’t alone: the Reds allowed more home runs than any team. Ever. The club even traded away one of most affable players in club history.

For the second consecutive season, the ol’ Redlegs topped the 90-loss mark. The last time the Reds lost that many games in back-to-back seasons? You may want to avert your gaze: it was way back in 1930-1934. Yep, just looking at the loss column, this franchise hasn’t had consecutive seasons as bad as 2015-2016 in more than eighty years.

I told you, way back on Opening Day, that 2016 was going to be bad. We all knew from the outset that this was a transition year, the first full season of the Reds going all-in on the rebuild (or as close to “all-in” as owner Bob Castellini will permit). So no one should be surprised that the Reds are going to finish at the bottom of the National League Central once again.

But as I reflected back on our pre-season expectations, I ran across something that Jason Linden wrote here at Nuxhall Way after last season. I hesitate to compliment him publicly, but Jason was prescient:

How good or bad the Reds are next year is going to depend on the development of the new crop of players coming along and how a few players recover from injuries (think Mes and Homer). If the pitching staff develops and the Reds bring in someone like Arroyo to eat innings, I don’t have to work too hard to see them reaching .500 again. Any lineup that has a healthy Votto, Frazier, and Mesoraco in it is capable of doing damage.

Look at that. The Reds were thwarted at almost every turn. Mesoraco and Homer Bailey didn’t recover from injury, and both missed almost all of 2016 on the disabled list. The pitching staff developed somewhat (think Anthony DeSclafani, Michael Lorenzen, Raisel Iglesias, Brandon Finnegan), but had some high-profile setbacks (Cody Reed, Robert Stephenson, John Lamb, in the lower-profile category). And while Disco, Lorenzen, and Iglesias were mostly great, they all spent huge chunks of the 2016 season on the DL themselves.

In addition, the Reds never had a lineup with Joey Votto, Todd Frazier, and Mesoraco. Frazier was traded in the off-season.

So really, of all the things that had to go right in order for the Reds to be an improved team in 2016—well, they all went horribly wrong. But here’s the good news: The Cincinnati Reds have absolutely hit rock bottom. It can only get better.

And yes, I really believe that. I’m pretty excited about the next couple of years, with all the talent on the horizon. To be honest, though, I enjoyed 2016 more than either of the last two years, and maybe more than any season since the division title year of 2012. That’s mostly because I had no expectation that the Reds would be competitive, so I had to find other nuggets to enjoy. And there were plenty of those.

Like Joey Votto, who was simply amazing every single day, every single at-bat, every single pitch. Votto is hitting .325/.437/.548 with 28 HR and 92 RBI at last count; he’s a hitting savant, and worth every penny.

Like Billy Hamilton, who dazzled all of us with his heroics in center field and wizardry on the basepaths, and he finally got his OBP above .320. (!) Billy was so much fun to watch that I’m writing a musical about his life. What should I name it?

Like Anthony DeSclafani, a 26-year-old who showed flashes of brilliance and an ability to be a top-shelf starter in this league, and Dan Straily, who the Reds picked up for free and ended up leading the team in wins.

Like Adam Duvall, a throw-in to the Mike Leake trade, who made an All-Star team on the way to 32 homers and 100 RBI.

Like the first-half brilliance of Reds mainstay Zack Cozart and the second-half fireworks from fellow veteran Brandon Phillips. We don’t know how much longer we’ll get to watch those guys, so it was good to see them both enjoying moments in the sun this season.

Like Tim Adleman, who was cut by an independent league team and worked in a grocery deli to make ends meet (/meat), but finally got a chance with the Reds. Thanks to those injuries we discussed above, Adleman made his debut at age 28, started 12 games, and acquitted himself very well, going 3-4 with a 3.90 ERA. It’s one of my favorite stories of the 2016 season (and not only because Adleman and I share an alma mater).

At the end of the day, it’s just baseball—a pastime, a distraction. And even bad baseball can be fun, if you’re looking in the right places.

Let’s put the 2016 Reds season to bed, with sweet dreams about the Reds taking a big step forward in 2017. Who Dey to all, and to all a good night.