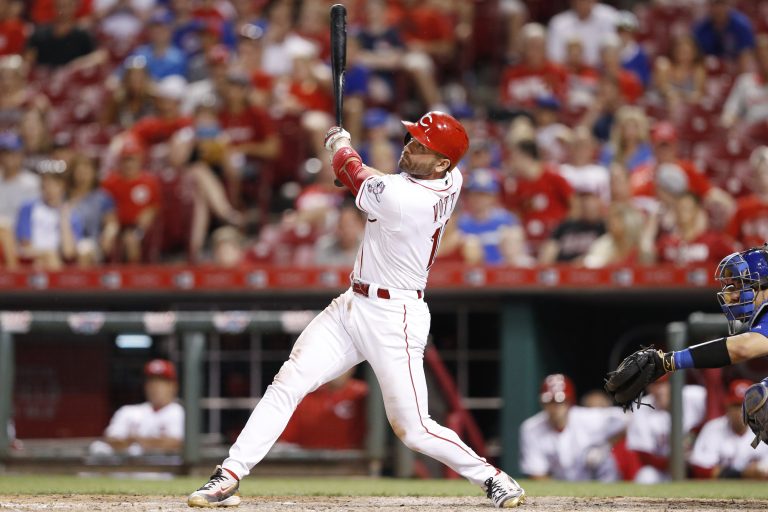 Baseball is hard. We all know that, but it’s easy to forget. The difficulty of baseball is why— generally—players can’t just decide where to hit the ball. They can’t just decide to be a certain kind of hitter. Players are who they are. Sometimes adjustments happen, but they aren’t common and are often painful.

And then there’s Joey Votto.

Votto is different. He is the only player I can recall regularly deciding to be a different kind of hitter. He experiments. When he isn’t happy with his results, he tries something else. Still, over the course of a full season, things have always had a way of evening out. He strikes out a little less than league average. He walks a lot. He hits over .300. He displays good power.

Except, last year, in the second half, something changed. Votto, you may recall, had a bad first half last season. Among the things that were off were his strikeouts: He was whiffing a lot. Much more than he ever had before. So what did he do? What only Joey Votto can do. He made a decision and stopped striking out.

Take a look at this chart that shows Votto’s rolling 80-game (half a season) strikeout rate for his entire career.

It’s incredibly consistent until 2016, when there is a huge spike and then a top-of-the-rollercoaster drop. He’s currently striking out about 30 percent less often than he has throughout his career. That’s a huge adjustment and one he seemingly made overnight. It’s remarkable. And he’s still taking more than his share of walks.

But we don’t need to stop there.

Votto’s current slashline is .270/.375/.610, which is about 50 percent better than the average batter according to FanGraphs. That’s really good, except for the fact that Votto normally hangs out close to 60 percent above average.

So here’s the part where I make a prediction for you: Joey Votto is about to have the best season of his career. He currently has a Batting Average on Balls in Play (BABIP) of .231. BABIP, much like regular batting average, tends to swing around a lot because a lot of luck is involved and it takes awhile for things to even out. The lowest BABIP Votto has ever had in a full season is .328 his rookie year. It was .299 when he was dealing with injuries in 2014. His career BABIP is .355. That number is not going to hang out at .231 for long. With a completely normal .300 BABIP (this is about the major league average), he’d be hitting .320 with corresponding increases in on-base percentage and slugging.

And then there are the homers. Votto currently has nine on the season. He hasn’t hit for this much power at any point in a season since 2010, when he finished with 37 homers and won the MVP. April was his first month with eight homers since August of his MVP season.

Some weird luck aside, the Reds star first baseman is continuing to hit like he did during the second half last year when his line of .408/.490/.668 brought to mind the likes of Ted Williams and Babe Ruth. I went looking for contemporary examples of what Votto is doing—there simply aren’t any. This is the age of the strikeout. No one has strikeout numbers as low as his with walk rates and power numbers as high as his. It is remarkable.

I don’t know how Votto manages to do what he does. I don’t know how it is that he’s able to simply change his approach and get results. But he does it, and this time, the best hitter in Reds history has made himself even better. Hold on, Reds fans, I think we’re about to see what happens when Votto puts it together for an entire season.