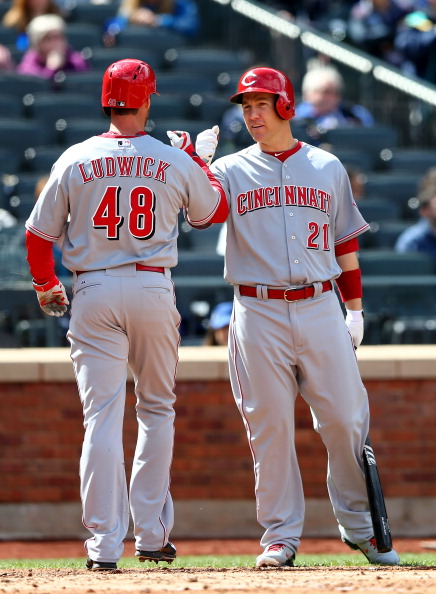 It’s much too early in the season and with far too small a sample size to make any sweeping generalizations about how Ryan Ludwick is a reincarnated George Foster or whether or not the Reds can option Zack Cozart to your nephew’s Little League team. We can, however, take a look how things are going on a small scale through the team’s first nine games. Usually, we’ll call this Good Week/Bad Week, but with the season only 10 days old, let’s go with Good Start/Bad Start.

Good Start
Catchers: Brayan Pena filled in admirably for Devin Mesoraco the first week of the season, with Mes leaving quite an impression himself in his first two games back from the DL. The pair have gone a combined 10-for-25 from the dish with four doubles and a homer, with an average OPS of over 1.000 and an average BABIP (batting-average-on-balls-in-play) of .590.

Left fielders: In the seven games he’s played this season, Ryan Ludwick is 8-for-25 with a homer, three runs scored, four RBIs, and an OPS of nearly .800. Chris Heisey, who’s racked up plate appearances in eight games, is 6-for-18 with a double and three runs scored, a BABIP of .429, and a line-drive percentage of 42.9.

Bad Week
Jay Bruce: A slash line of .188/.308/.438 and an OPS of .745 won’t cut it from Bruce if the Reds want to do any amount of damage in the playoffs this season (or even just make it that far). As I wrote on the blog last year, the reason Bruce can often pass the eye test is because of all those doubles, homers, and simply the way the ball looks when it comes off his bat. The problem, in the past, has been getting it to come off the bat more often. But so far in 2014, Bruce’s nine Ks in 39 plate appearances equals an early K% of only 23.1, which is better than last year (26.5) and even better than his best season in 2010 (23.7). His current contact percentage is good (75%), and he’s showing a much improved approach at the plate: swing percentage of 40.8%, swinging percentage on pitches outside the zone of only 21.2%, and a swinging strike percentage of only 9.1%. So where’s the problem? Well, part of it is a little bit of bad luck—a BABIP of .182 certainly doesn’t suggest good luck—and part of it is actually NOT making great contact. His line-drive percentage is at 16.7%, while his ground-ball percentage is at a very high 45.8%. So yeah, there is plenty of time to change that, but no, it hasn’t been a great start.

JJ Hoover and Trevor Bell: In four appearances, Hoover has gone 2.1 innings, faced 17 total batters, and surrendered five earned runs (including a game-losing, walk-off grand slam) for an ERA of 19.29. Bell, however, feels no pity. In 0.2 innings over 2 appearances and nine total batters faced, Bell has allowed five earned runs of his own for an impressively disturbing 67.50 ERA.

But again, yes, it’s early…which is likely what Trevor Bell repeats to himself over and over again every night as he tries to fall asleep.