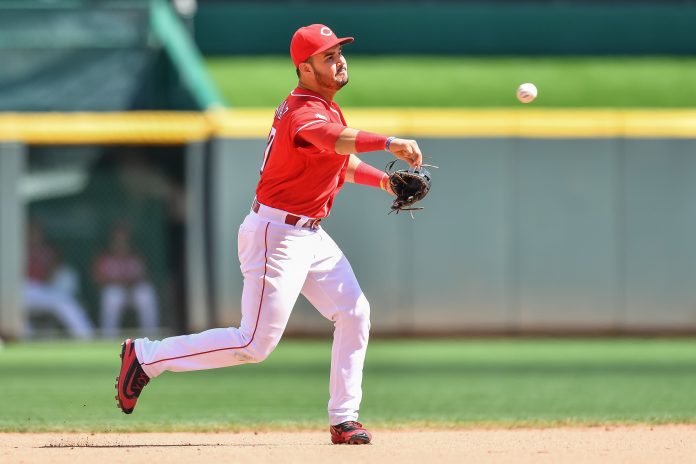 Eugenio Suarez is better than you think.

So good, in fact, that I’m ready to declare him as one of the cornerstones of the next good Reds team.

By all measures, Suarez has been one of the most productive hitters in baseball. You may have noticed that he appears to have improved tremendously on defense, as well. We started seeing signs of that late last season, and he’s been nothing short of spectacular over the first month of this year. As a matter of fact, I don’t believe I’ve ever seen a player improve defensively as much over the course of one calendar year as we’ve seen from Suarez thus far.

But that’s just the eye test, and we know that can be deceiving. Fortunately, the defensive metrics seem to bear out what we’re seeing (take this paragraph with the usual caveats about small sample size and the value of defensive statistics). Judging by FanGraphs’ defensive runs above average (Def), Suarez was the best defensive third baseman in all of baseball in April. He leads the majors in UZR (Ultimate Zone Rating), too.

There are a few reasons I believe Suarez’s improvement with the glove is real, and sustainable. First of all, Suarez has earned a reputation as a very hard worker who takes his craft seriously. Last year, Suarez was trying to learn the hot corner at the big league level—he hadn’t played any third base since a handful of games in the winter league as a teenager. Do you know how hard it is to learn a new position in the majors? It’s incredibly hard. He was dreadful early last season, but we’ve seen nothing but a steady improvement since then.

Let’s shift back to the hitting side of the equation. By almost any advanced measure, Suarez has been one of the top-three third basemen in the entire league in terms of offensive production. He started the season on a hot streak last year, too: After twenty games, Suarez was hitting .301/.363/.521 with 5 homers and 14 RBI. Then he cratered out in May before rebounding to hit for a decent clip the rest of the season, finishing with a slash line of .248/.317/.411 with 21 home runs and 1.9 WAR. Not bad for a 24-year-old.

But there are a few things that distinguish his scorching hot April 2017 from the beginning of 2016. And these are the things that make me believe Suarez may be in the midst of a breakout year. Again, let me caution you: we’re talking about small samples here. It’s only a month into the season. But the emerging trends make me optimistic.

Last week over at FanGraphs, Paul Sporer looked at some of the hitters who have been “early surprises” in 2017, and Suarez made the cut. As Sporer noted, Suarez continues to improve his approach at the plate. He’s swinging less (42% as opposed to 45% last April) and he’s swinging at a lot fewer balls outside the strike zone (21%; he swung at 28% of balls outside the zone last year). Let’s call that the Joey Votto Effect, as it appears Suarez is trying to mimic Votto’s approach at the plate.

And that’s a good thing.

Further, Suarez’s strikeout percentage is way down (25% last year, 17% this year) and his walk percentage is way up (8% to 12%). He’s hitting more line drives, he’s making more hard contact, and he’s spraying the ball around the field better. His entire approach at the plate is much more refined, and while it’s a work in progress, the numbers are very encouraging, indeed.

As Sporer puts it: “A 25-year old coming off a solid first full season last year should garner attention. The fast start will obviously subside, but there are factors throughout his profile that suggest player evolution is at least partly to explain for the blazing hot numbers thus far.”

For whatever reason, however, Suarez has never garnered much attention around the big leagues. Heck, he can’t get any respect in Cincinnati, either. Suarez took over third base from Todd Frazier, an immensely popular Red. In some shadowy corners of #RedsTwitter, you’ll still find fans who would prefer Frazier over Suarez, despite the fact that Suarez is (and I’m being generous to Frazier here) a comparable offensive player to Frazier right now—while also seven years younger, and still on a trajectory to improve.

Frazier will always be remembered fondly in Cincinnati, and with good reason. He had some great years and provided us with plenty of memorable moments. But remember this: Suarez hit 21 home runs in the big leagues at age-24. Frazier spent his entire age-24 season at Triple-A (where he hit just 17 homers). Suarez may never win a home run derby, but he’s likely to have a better career than Frazier’s, when all is said and done.

It’s not just that Suarez gets unfairly compared with his predecessor; some fans are already trying to move him out of the way to make room for the next Reds third baseman.

The club drafted stud hitter Nick Senzel with the #2 overall pick in last year’s MLB draft. (You may recall this profile of Senzel, written by me and published here in the digital pages of Cincinnati Magazine last summer.) Senzel excelled in his first season of pro ball, and he enters 2017 as the consensus top prospect in the Reds organization. As a fairly polished college hitter, it is expected that he’ll be ready for the big leagues sooner rather than later. And oh yeah, and Senzel plays third base.

Senzel is going to be a very good player. I really believe that, and I think there’s a pretty good chance that Senzel will be another cornerstone of the franchise. But he’s in his age-22 season right now, and he’s playing in Daytona, Florida. That’s Class-A baseball. In Suarez’s age-22 season, he played 85 games for the Detroit Tigers in the American League.

Why do we keep wanting to look past Suarez? This is a kid who has improved every year, and he’s still very young. All indications are that he will be a star. (And here’s where I mention my favorite thing about Suarez: the Reds acquired him from Detroit in exchange for the corpse of Alfredo Simon. I love it.)

Maybe Suarez won’t be the Reds’ third baseman of the future. Perhaps he’s destined to be a second baseman, or a left fielder. But I’m ready to declare him one of the most important pieces of the next good Reds team, wherever he plays. And if he can continue to improve as we’ve seen over the last year, he’ll be a multiple-time All-Star.

And maybe, just maybe, Suarez can finally start to get a little respect around here.