Home Sports Baseball How Bad Are the 2016 Reds? 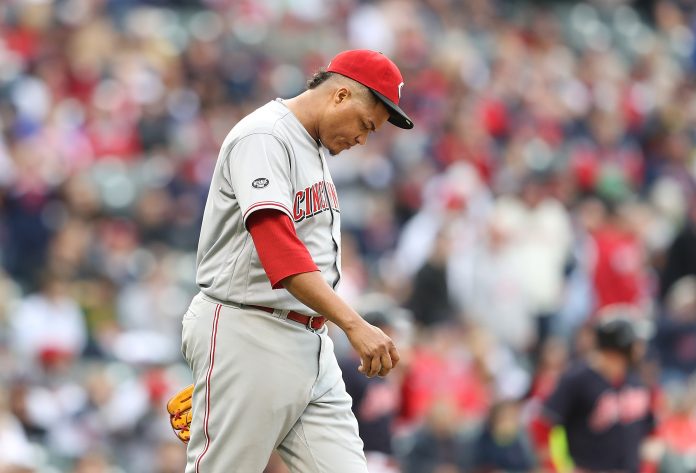 Your Cincinnati Redlegs are 15-30. That’s fifteen wins in their first forty-five games. Yikes.

We knew it was going to be bad, but this is ridiculous. That’s a (let’s call it) suboptimal .333 winning percentage—and really, it doesn’t seem quite right to even refer to it as a “winning” percentage—better than only two other teams in the majors.

Let’s try, if we can, to forget that the Reds are embarking on a ten-game road trip that could make that percentage drop further. If we extrapolate that losing percentage out to a full season’s worth of games, you come up with a record of 54-108. I’m sure I don’t need to tell you, friends and neighbors, that this would be the worst season in franchise history.

Take a look at this chart. It’s every Reds team that finished a season with a winning percentage below .400: 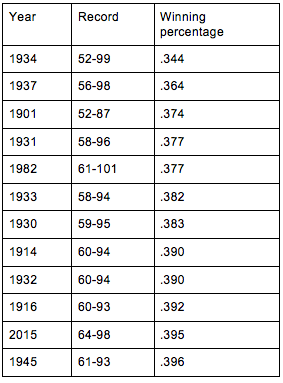 Here’s what I also notice: Just three seasons after that disastrous 1916 campaign, the Reds won the World Series in dominating, fully-convincing fashion.*

*Forget the Black Sox. The Reds won that championship fair and square, as far as I’m concerned.

The other span was even lengthier, from 1929-1937. You think you have it bad now? Back in 1930-1934, the Reds served up five consecutive seasons that all rank among the nine least-successful seasons in club history. Five in a row where the Redlegs never won more than 39 percent of their games.

Good thing Twitter didn’t exist back then. I bet there were some sternly worded telegraphs to the editor, though.

Ok, so you may know where I’m going with this. Just two seasons after that disastrous season, the Reds won the National League pennant. Then, in 1940—just three years after losing 98 games—Cincinnati defeated the Detroit Tigers to win their second World Series championship.

There you have it. I hereby guarantee that the Cincinnati Reds will be champions of the baseball world sometime within the next three years. Bet the ranch on it.*

*Please, don’t bet the ranch on it.

There are a couple of other bad teams I want to discuss before we come back to the present-day version of the Jordan Pacheco Traveling All-Stars & Motor Kings. Many of you are familiar with the 1982 Reds, the team that most consider to be the worst in franchise history. That’s based largely on that nasty 101 number in the loss column, but as you see above, it’s “only” tied for fourth-worst based on winning percentage.

Still, a terrible season. I mean, really bad. I was just getting into the Reds at that time as a little guy who wanted to love the team that his father and grandfather seemed to love, so I probably didn’t realize how ugly things were that year. And yet it’s one of my favorite teams.* Davey Concepcion had his last good season (3.7 bWAR), Dan Driessen and Cesar Cedeno hit a little, but the offense and defense were pretty much a dumpster fire.

The rest of the pitching staff, however, was less than stellar. Frank Pastore was okay, and a couple of relievers were decent, but even Tom Seaver was awful, if that tells you anything.

Okay, I digressed a little there—sorry, I have a strange fascination with the 1980s Reds. Anyway, the squad was pretty awful that year, and it seemed even worse because the Reds were (a) not far removed from the Big Red Machine, and (b) coming off a season in which they had the best record in the National League (but didn’t make the playoffs).

The following season, the Reds lost 88 games (exit Dick Wagner, re-enter Bob Howsam), and in 1984, they lost 92 (enter Pete Rose). Then in 1985, Cincinnati won 89 and began a streak of four consecutive second place finishes that culminated in a stormy finish to the decade (exit Pete Rose) and a memorable championship in 1990 (enter Herm Winningham).

The most recent terrible Reds team that we can look at is the miserable 2001 club. It didn’t make the table above because, at 66-96, manager Bob Boone’s roster finished with a .407 winning percentage, placing it as the 14th worst club in Reds history. But let’s not sell that team short: they were awful, finishing 27 games out of first.

Listen, most of us endured that mess of a team, and I don’t want to understate how difficult the next few years were for Reds fans. That year marked the beginning of nine consecutive losing seasons, a streak that was finally broken by the 2010 NL Central division champs. It was a terrible stretch that was only occasionally brightened by the long home runs provided by Adam Dunn.

Is there any reason we should be more optimistic now than we were back in 2001? Are the Reds about to embark on another decade in the wilderness?

I dunno, maybe. I don’t think so, for some reasons I’ll discuss in a moment, but if you’re looking for me to guarantee you that the Reds won’t be bad for the foreseeable future, I can’t help you. I’m optimistic, but I can’t see the future.

I could actually probably write 10,000 words on why this organization is in a different place than they were in 2001, but let me focus on just a few reasons. First: Carl Lindner and Jim Bowden are no longer at the helm.

Lindner was a great Cincinnatian in many ways, and a big-time philanthropist. I don’t relish criticizing him. But it’s just a fact: he didn’t want to spend any more money on the Reds than he had to. Current owner Bob Castellini, on the other hand, has demonstrated a commitment to opening the checkbook. We can argue over whether the Reds spend their money wisely, and I’ll be the first to concede that they don’t always. But the fact is that Castellini is open to spending the money in an effort to bring a winner to Cincinnati—and I think the evidence is incontrovertible on that point.

As for Jim Bowden…well, you may not like Walt Jocketty and/or Dick Williams, the two-headed General Manager monster at the helm of the Redlegs these days, but neither of them are Jim Bowden. Advantage: 2016 Reds.

Another advantage that the current club has is that they’ve demonstrated more proficiency in scouting and development than Bowden’s Reds did. As a shorthand, look at some of the early-2000s first-round draft picks: David Espinosa. Jeremy Sowers. Dustin Moseley. Chris Gruler. Ryan Wagner. Barf.

That 2010 division championship team, however, was built on the back of the draft (and international scouting). There’s no wealth of evidence to suggest the Reds have drafted any poorly of late, compared with the run-up to the 2010-2013 clubs, and Raisel Iglesias seems to indicate that Cincinnati’s focus on international players isn’t entirely unproductive.

As for scouting, you also have to tip your cap to the job Reds management has done re-filling the minor league coffers via trades. See: Eugenio Suarez, Adam Duvall, Brandon Finnegan, John Lamb, Cody Reed, etc.

And that’s another reason I think these Reds are closer to being competitive than that 2001 squad: Iglesias, Anthony DeSclafani, Robert Stephenson, and Reed, among others. This organization is flush with young pitching. They won’t all pan out, but some of them will, and that puts them head and shoulders above the mess that the 2001-2009 Reds ran out to the mound on a daily basis. (Please don’t make me talk about Jimmy Haynes, Jimmy Anderson, and Jose Acevedo again.)

Finally, I think there’s a little bit of recency bias at play. Almost all of us lived through that miserable 2001-2009 stretch. It was not fun. Listen, I am the biggest Adam Dunn fan in the world (as evidenced by the fact that I just mentioned him twice in a 2016 column about the Reds), and even I didn’t have a lot of fun during those years.

But the Reds hadn’t suffered through that many losing seasons in a row for fifty-plus years before the 2000s. Surely we aren’t embarking on another run like that, just seven years later? Right???

Yes, the team is headed for a third straight losing season, but why not be a little optimistic? There are still too many positive signs to make me lose hope right now. And as we saw in 1919 and 1940 (and 1960, if we want to squint), sometimes it doesn’t take long to turn a team from also-ran to pennant-winner.

Or maybe I’m just delusional. Only time will tell.