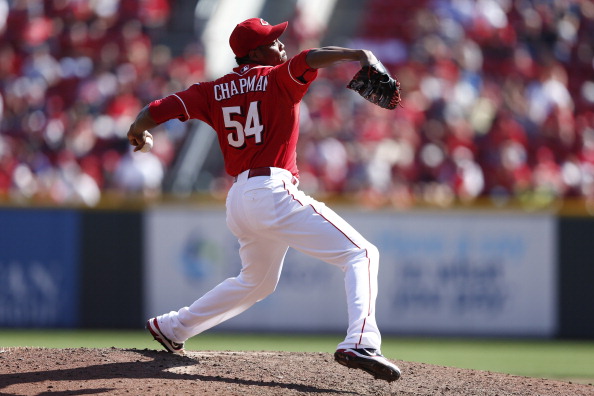 Scary stuff last night from Spring Training in Arizona as Reds pitcher Aroldis Chapman was hit in the head by a line drive during the sixth inning of last night’s game against the Royals. Chapman was taken off the field on a stretcher, after which the remainder of the game was cancelled. The Reds later reported that Chapman suffered fractures above his left eye and nose.

Deadspin (and others) posted game footage of play early this morning with the WLW radio call, as well as info suggesting the ball was traveling at least 110 mph when it struck Chapman. Tim Burke of Deadspin also posted a couple videos late last night—both just as frightening as the broadcast—including one from a fan in attendance and another showing the batter and catcher on the play.

While it was quickly reported after the incident that Chapman never lost consciousness, pitcher Brandon McCarthy—who was involved in a similar situation as a member of the Oakland A’s in 2012—noted that the full impact of the injury wouldn’t be clear until they reviewed results of a brain scan.

@yakyunightowl @harrypav all reporting at this point means zilch, until he gets a scan.

As of this morning, Chapman was still hospitalized in Phoenix.