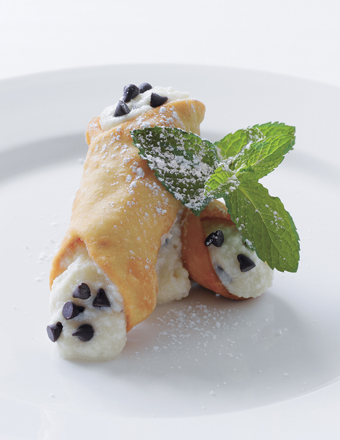 Don’t let the roiling stew of retail or the choked roads besieged by traffic and construction deceive you. Though Tony’s occupies a massive cinder block structure surrounded by a vast sprawl of pavement and a soulless wellspring of strip mall density, all you need to know is that once you’re through these doors, you matter.

At the host stand to your left, a pretty young woman greets you with intonation and pep normally reserved for the varsity cheer squad. She’ll guide you past the elevated lounge on the right where the clatter of a cocktail shaker being vigorously brandished alludes to the maturity of the clientele.

Watch your step please, she cautions and draws your eye downward with a sweeping hand, like a seasoned airline stewardess, her black four-inch stilettos more confidently navigating the descent down the ramp than yours. An open kitchen stretches down nearly the entire length of one wall, a line of white-jacketed cooks bent over plates building salads, wielding paddles to retrieve flat bread from the wood-burning oven, or hoisting Flintstone-sized steaks from grill to counter where they await their final marching orders from a spirited corps of crisply attired waitstaff. The ramp drops you down into the inner sanctum of Tony’s, a dining room dressed in the hallmarks of steakhouse swank. Tables draped in white linens are set in gleaming glass and flatware, a row of gently curving ivory banquettes on one side reserved for the commingling of power and seduction; the room stage lit for ravenous appetites, and darkened by bittersweet chocolate walls and a haze of charred meat. It is a big room, 150 or so seats, with a soaring ceiling of exposed ductwork disclosing its recent conversion from a chain restaurant—specifically, Bravo! Cucina Italiana—where diners could experience such “authentic Italian food” as Tuscan mashed potatoes amid giant pillars depicting a Roman ruin. Though Tony Ricci, the new proprietor, could have likely rolled out a set design worthy of his Italian roots (he moved here in 1969 from the southern central region of Molise), he shrewdly had the Roman ruin dismantled.

There appears to be enough service staff—predominantly male, in high-buttoned black vests, knotted ties, and dove gray shirts—for every customer in the semi-full dining room to have their water glass filled every three minutes. They weave briskly in and out of the tables on the floor delivering plates with muscular portions of meat and fish—a pound of veal chop resting on a drift of butternut squash puree, a pound and a half of porterhouse steak with a companion of garlic whipped potatoes. They stand attentively with one hand behind their backs as they deliver the nightly features or pour a second glass of cabernet, scurrying to pick up your dropped linen napkin before you do. The effect is less polished than eager to please in an overly affectionate lap dog way that’s often the mark of a new restaurant. Tucked into an elevated corner that bridges bar and dining room, a trio provides live music set to a swing beat that traverses the map of musical genres: supper club standards (“New York State of Mind”), classic cruise ship (“On The Road Again”), and numbers that make you wonder if the musicians are simply amusing themselves (is that The Monkees’ “Last Train to Clarksville”?).

And at the nucleus of all of this activity is Tony Ricci. Showtime.

He is a captivating presence, Tony Ricci. Handsome. Tall. Natty suit; silk tie. Don Draper cool; Jersey Shore bronzed and gelled. He works the dining room with a gait that’s part runway model, part ringmaster, and he has the assured ease and camera-ready smile of a tenured politician. He may extend a perfectly manicured hand for yours or place one on your shoulder blade as he inquires about your meal. He may bend down to whisper in your ear, or slide in next to you in one of the booths. He speaks sotto voce; he quips. (Us: “Good evening, we have a reservation.” Tony Ricci: “Why? About what? I have none.” Bada-bing!) He welcomes you, checks in with you, and is there to say good-bye to you when you are finally satiated with beefy martinis and appetizers of crisped calamari freckled with orange gremolata or icy oysters on the half shell; with a bottle of white burgundy and entrées of linguine and mussels glazed in lobster saffron broth or oven-roasted chicken in the company of pearl onions and roasted mushrooms. He’d be a presence in any dining room, but he is to the steak manor born.

Best known for his 22 years with the Jeff Ruby empire—managing the venerable Precinct (the former police station turned steakhouse occupying the corner of Delta Avenue and Columbia Parkway) and training service staff at several of the other Ruby steakhouses—the 50-year-old Ricci has built a life in the hospitality industry. With gigs that began in a retirement home (“The best training ground for learning to accommodate guests,” he says. “How can I tell a 93-year-old woman she can’t have hot fudge on her ice cream?”) to a Tony Roma’s in Miami; from hotels (Drawbridge Motor Inn, the Netherland Plaza) to helping resurrect a local restaurant mired by scandal (the former Giacomo on East Sixth Street; in 1988 a part-owner was charged with drugging two women at their apartment). It was overseeing the operation of The Waterfront’s celebrity-soaked La Boom nightclub where Ricci and Ruby formed their 22-year relationship—something Tony Ricci assumed was enduring until he was let go in 2008. As it turns out, there are no regrets. “I had a great time there,” he says.

After trying to reestablish his roots in local high-end steak restaurants (the now-closed Red in Hyde Park and Mesh in West Chester), Ricci signed a deal in December 2009 for the vacated Bravo space. At the helm of his kitchen is David Robinson, a New Zealand native and fine-dining veteran who spent time at The Maisonette under chef Georges Haidon; Paolo’s, once the Cal-Italian power lunch of choice in Washington, D.C.; and the cozy, seaside Wellington Room in Portsmouth, New Hampshire.

Much of Tony’s menu is right out of a steakhouse playbook: jumbo shrimp and king crab legs from the raw bar; Caprese, Greek, and Caesar salads; sides of creamed spinach, mac-and-cheese, asparagus with béarnaise sauce, and sautéed mushrooms; toppings of roasted garlic, foie gras, or Gorgonzola butters to accompany your center cut of filet mignon should you favor coating your palate in an oleaginous slick. There are boutique touches, though, that make it stand out from its more pedestrian brethren—a ghost chili aioli with the calamari, steak tartare torch-kissed and topped with a poached egg, a superb rack of lamb rubbed with aromatic sumac and served with mint pesto.

But where Tony’s service is consistently hyper-attentive, the execution of the menu stumbles. We powered through the 14-ounce prime New York strip steak—which rivals the best of the best—and couldn’t finish the pan-seared halibut, whose texture and flavor profile couldn’t hold up to a wedding banquet at a country club. In addition to the excellent rack of lamb, the roasted quail stuffed with cognac-soaked prunes and manchego cheese and served with a smoked grape demi could put one in full-time grovel mode, but the wood-fired flat breads were excessively cheesy and the mac-and-cheese excessively pasty (a result of the flour not being cooked out of the sauce)—a responsibility Chef Robinson, during a phone conversation, quickly blamed on his recently departed sous chef. And therein may lie the nature of the kitchen’s inconsistency. When you run the show, the most successful people know to shoulder the failures with the successes. Just ask Tony.

Originally published in the October 2010 issue.