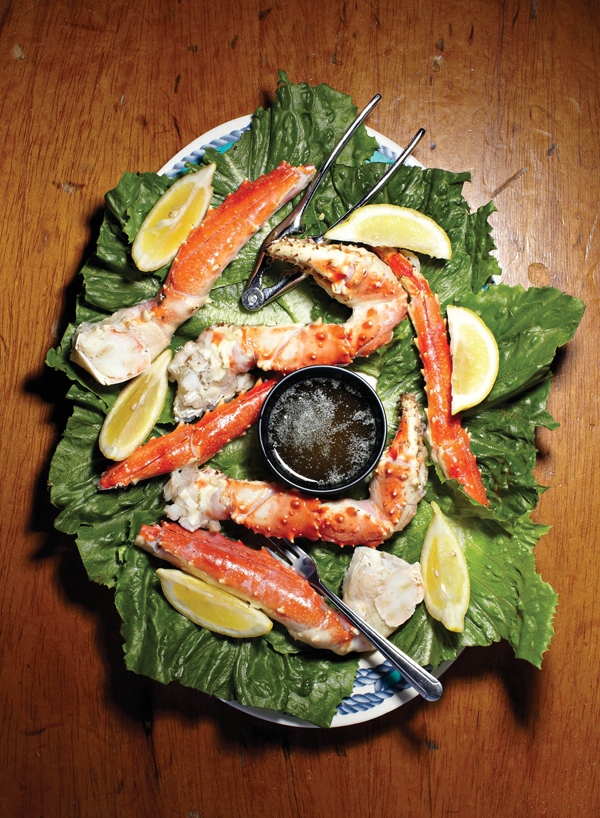 New England clam chowder is a dish subjected to abuse. The famous stew (attributed to French-Canadian fisherman before it became an icon of American regional cuisine) is more often than not a glutinous pudding encumbered by potatoes and slight on clams, even in respectable eateries. Yes, it should be thick, but the thickening should result from starch released from the potatoes, not added flour, and certainly not cornstarch. It should contain fish stock or clam liquor, salt pork, cream, and cherrystone or littleneck clams. From here variations abound: the addition of vegetables or other seafood, bacon instead of pork, milk instead of cream, and even a completely dairyless form, where the creaminess results from pureeing some of the potatoes.

The best clam chowder I’ve ever had was served in a plastic bowl and consumed standing up in the middle of a tiny fish shack on Cape Cod. Dozens of these shacks are scattered along the New England coastline. Some are built on harbor pilings surrounded by bobbing boats or perched on a pier overlooking the gray blue Atlantic, others sit by packies (a colloquialism for liquor store). Their inventory—striped bass, codfish, flounder, bluefin and yellowfin tuna, lobster, quahogs, steamers (soft-shell clams), littlenecks, cherrystones, and more—relies on the season, and is usually hand-selected from local fishermen and day boats.

My most memorable bowl of chowder appeared one afternoon while I was wandering the coast north from Hyannisport. Somewhere between Chatham and Orleans we stopped to get steamers and a beer, a perfect combination on a day where a waterside picnic table encourages your indifference to time. As we stood waiting for the steamers and gazing into the shop’s salt-water tanks, the owner pushed the bowl into my hands. “My wife makes this. It is the best clam chowder anywhere,” he said. A big claim, but not without merit. Because he was absolutely right. I’ve been in search of the second best ever since.

Chef John Broshar won’t allow anyone else who works in his kitchen at Pelican’s Reef to make the New England clam chowder. “I keep that one to myself,” he says. He’s got reason to be concerned. On his giant laminated menu, which targets nearly every fish preparation made popular in tourist-soaked seaside resorts, he declares his to be the “best inland clam chowder anywhere.” That’s a lot to burden a prep cook with. Superlatives aside, it was the word inland that caught my attention. When a bowl of chowder—set adrift between crab cakes, grilled fish tacos, broiled grouper stuffed with rice and crab, and dozens of other items that never swam anywhere near the Southern Ohio Valley before they met their fried and tartar-sauced maker—is qualified with the word inland, I suspect the chef knows and respects the difference. And so he does.

Broshar makes a particularly silky chowder with just enough brine and smoke to cut the richness of the cream, and plenty of plump sweet clams that outsize the potatoes and minced onion. My dinner companion, a Boston native who grumbles about Cincinnati’s lack of fresh seafood and overly polite baseball fans, ordered a second bowl. I was dumfounded.

Two weeks prior to our visit, I had never heard of this place. But when a certified master chef tells me one of his favorite local restaurants is a seafood joint in a strip mall on Beechmont Avenue in Anderson Township, I make a note to check it out. That’s just what I did during a July interview with John Kinsella, the senior chef instructor at Midwest Culinary Institute. Pelican’s Reef, Beechmont Ave.????? I noted on my legal pad, the excessive question marks meant to indicate both never heard of it and probably a crazy idea—a sentiment confirmed when I tried to round up a couple of dining companions for the initial scouting trip.

Suddenly, everyone was busy. My Bostonian mate simply declared “Whaaat? No way!” (That is, until we reached a quid pro quo agreement which involves me jumping out of my seat during a ballgame and shouting “You suck!” at players on the opposing team and “You make a zillion dollars; hit the damn ball!” at the Reds when deserved.) Their concern was wasted, as Pelican’s Reef was worth all four trips we made.

John Broshar was a regular customer of the 16-year-old restaurant before he became the owner and chef in 2001, with little more in his toolbox than a hobby and a willingness to take a chance. Keeping the laid back Floridian vibe that the original owner had created, Broshar brought the restaurant out of its disrepair and created a menu not unlike a hundred menus near Disney World. Seafood platters and baskets, peel-and-eat prawns, fritters, cheese fries, and even chicken fingers for the Little Skipper. It’s all there. Some of it would not be missed if it went away (the broiled mussels were a big plate of regret; the lobster fritters charred and lobster-lite).

Over the years Broshar has developed his niche: a blackboard menu inspired by the seasonal availability of fish obtained daily from one or more of the six purveyors he uses. Malabar snapper and swordfish from Hawaii, Australian triple tail, soft shell crabs from Maryland, wild Alaskan salmon, wreckfish from South Carolina, Florida yellow tail, rainbow trout, and wild striped bass are just some of the varieties that rotate through the extensive feature menu written on a 10-foot by 2-foot chalkboard and e-mailed to the 1,000-plus customers that request it sent to them weekly. (Broshar claims over a third of his sales are from the feature board.)

On advice from Chef Kinsella, we navigated this board every visit, and found the fish fresh. It’s so fresh we were aching for the kitchen to stop overdressing it. A little less pesto butter on the steelhead salmon; a streak of the piquant pepper sauce over the wild striped bass instead of a ladle. Wreckfish buried under a hill of jack cheese, sour cream, salsa, and guacamole didn’t seem to deter anyone—it sold out. In fact, Broshar has never advertised. There is no social media presence. He doesn’t even take reservations. The interior is a Frankenstein collage of seafaring kitsch, maps, Home Goods art, and familial knickknacks given to him by customers. The staff ranges from a jovial grandfatherly type at the host stand (Us: “How long is the wait?” Him: “Tomorrow afternoon!”), to a groovy, throaty-voiced bartender named Star whom Broshar has known since she was knee-high. And in addition to the from-scratch food, that intersection of community and family is clearly part of the appeal, for Pelican’s Reef was packed every night we were there, both weeknights and weekends, with every customer demographic you could possibly fit into 130 chairs of dining room and bar, including babies.

Grilled grouper sandwich with chipotle tartar sauce, chubby fish tacos, perfectly fried piping hot oysters tucked into a buttered and toasted po’ boy bun with housemade slaw, tart-sweet key lime pie, and some sublime bowls—lobster bisque, spicy conch chowder, gumbo, and a tomato basil lobster chowder—are reasons to join them. So is the laid-back-but-loud atmosphere. And then there’s the New England style chowder. Is it the “best inland clam chowder anywhere”? I’m still searching for the second best bowl I’ve ever had. But it’s damn good. And I’m going back for more.

Originally published in the October 2011 issue