Home Baby and Beyond The Way-Back Machine 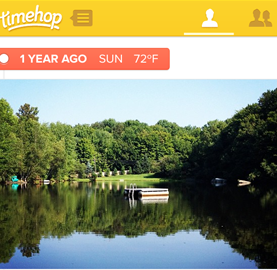 Turn your social media feeds into the mobile equivalent of a home movie with Timehop. Available for free for Android and iPhone, Timehop pulls past posts from Facebook, Twitter, Foursquare, Instagram, and Flickr so you can start each day with a look back at what you were doing a year, two, three, or even four years ago on that same date. Timehop’s developers claim it doesn’t support beyond four years, but I’ve occasionally seen posts from five years ago in my feed because I’ve been on Facebook. Way. Too. Long. Also, apparently I used to go on things called “dates” and eat something called “brunch” on Sundays after sleeping in until noon. I choose to disbelieve.

Parents be warned: The install does not come with a box of tissues for when last year’s Instagram photo of a chubby infant face suddenly fills your screen. Because kids, seriously. They grow up way too fast.