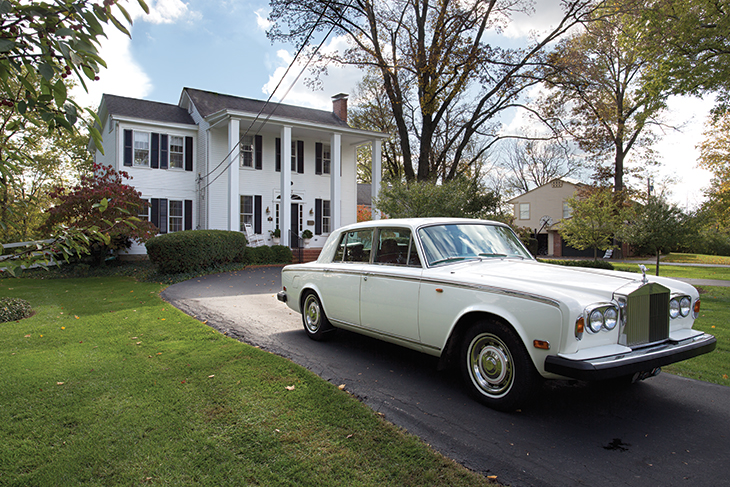 Here’s a rare offering: not only is this 123-year-old Terrace Park home on the market, but the owners are looking to move the white 1974 Rolls Royce parked out front as well. Homeowners Dave and Sally Coffman, who have lived here since 1983, are downsizing and don’t have room for the Rolls in their new garage. The car is not currently included in the home’s $649,000 asking price, but the Coffman’s are open to any offers potential buyers might make.

The couple inherited the car from family, but purchased the Southern-style colonial from Cincinnati television icon Len Goorian. Goorian, of the Uncle Al, Bob Braun, and Irma Lazarus broadcast generation, produced TV shows for almost every local network during his career; he lived here for nearly 25 years, and as quaint and prim as the property looks today, the home is rumored to have been quite the party place during his ownership.

Prior to Goorian, only two other families owned the home (three if you count the Nordloh family, who owned the property for three days before Goorian in 1959): the Hodges, from 1924 until 1959, and the Leaf family—some of the area’s earliest settlers—who actually built the home in 1890. Much of the surrounding property on Elm once belonged to the Leafs and Hodgeses, including the wooded patch of land behind the house, which abuts the Little Miami River and once housed summer cottages-turned-Depression-era-housing.

The proximity of the river has brought some interesting stories over the years. “There was one surprise the second or third year we were here,” says Dave Coffman. “We were working in the yard and up the hill [from the river] comes this couple with this guy in shorts and no shirt, asking ‘Will you help us? I rolled my canoe and my car keys were in it.’ ” The startled owners graciously agreed to drive the couple back to their home in Milford to get an extra set of car keys. How’s that for Terrace Park hospitality?

Over the 30 years they owned it, the Coffmans relocated an awkward powder room, added a family room, renovated the kitchen, and participated in Terrace Park’s 2010 “white house tour” (for which they received a watercolor sketch of the home). The couple has enjoyed living in Terrace Park so much that they are moving just a stone’s throw away, to a smaller cottage in the village. With that kind of convenience, who needs a Rolls?

Originally published in the December 2013 issue