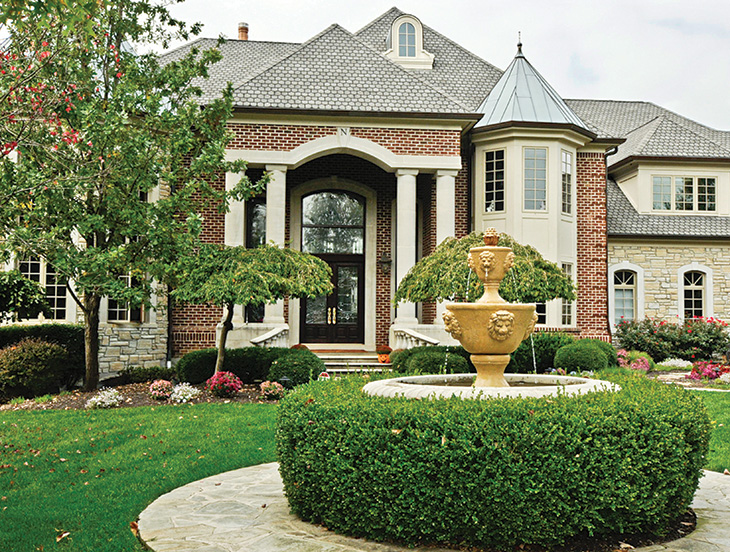 Older homes are usually the ones with a storied past, but this 13-year-old Homearama estate—on the market today for $1.55 million—has already accrued some tales of its own. Set on a wooded, five-acre parcel at the end of a cul-de-sac in Warren County’s TPC River’s Bend golf course community, Copperstone by Hensley Homes easily had one of the most desirable lots in 2000’s Homearama. It also earned the People’s Choice Award that year, came with the highest price tag ($2.2 million), and was sold before the show even began.

But less than a decade later, the nearly 15,000-square-foot home entered into foreclosure. By the time current owners Steve and Lynn Kukanza got hold of it in December 2010, the place had been vacant for 18 months and needed a full overhaul. Undaunted, the couple got right to work updating, repainting, and re-carpeting just about every square inch (Lynn even donned a jumpsuit at one point and refinished an entire marble shower herself).

The result? The home looks today as if it’s hardly missed a beat. The sizable fish pond and in-ground pool out back have both been fully restored; the kitchen has been re-lighted, re-tiled, and re-stocked with a new Thermador refrigerator; every one of the home’s five fireplaces is in working order; and the ornate wood, copper, and leaded glass bar in the finished basement—supposedly hand-made for the home’s debut by the Wooden Nickel—is party-ready. Most important, the home’s signature space, a two-story library finished entirely—paneling, flooring, ceilings, bookshelves, and built-ins alike—in Brazilian cherry wood remains as stunning today as it was in 2000 (the original resin-antler chandelier is pretty cool, too).

The question most people want to ask Homearama homeowners is: Just how livable are these places? The Kukanzas, who moved here from an older Hyde Park home, say it’s a toss-up. Some amenities, like the heated and cooled four-bay garage and the walk-through pantry connecting the mud room to the kitchen, are a dream, while other features, like an enormous window seat and a built-in entertainment center that originally graced the hearth room were “really not usable,” says Steve, and had to be removed.

In the end, the Kukanzas’ updates had a transformative effect, says listing agent Perrin March: “Everything they’ve done turned this house back into a home.” And that’s no small feat.