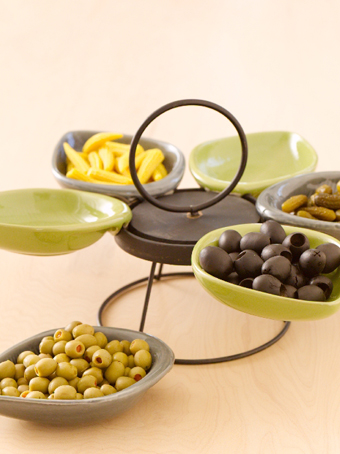 True confession—I’ve never owned a lazy Susan, unless you count the single platter mounted on a turntable that my husband used as a Scrabble board base. It quickly became history when it couldn’t hold the collective weight of my children as a makeshift “Sit ‘n Spin.” My mother did own something like a lazy Susan. Picture a Tupperware-manufactured serving dish, with compartments and a bowl in the middle, but no cool spinning base, which would give it the prestige of the real thing.

“Your mother was a little more hip,” says Brad Huberman soothingly, citing the Tupperware provenance. Huberman is a collector of the real thing. He points out that plastics, like Tupperware, were cutting-edge and drastically changed the landscape of the pottery industry. Less popular items, like lazy Susans, went by the wayside. “I have friends who collect these old [pottery company] catalogues,” Huberman says. “I breeze through them, and I say, ‘Oh, is there a lazy Susan in it?’ No.”

“High design and lazy Susans?” Huberman teases. “That almost scares me that you want to put those two concepts together! Because the point of them is that they’re silly. They really are.”

Huberman showcases his collection with a curatorial eye focused on fun. The pieces, en masse, would look just as striking in a contemporary art gallery. For Huberman, fun refers to a fabulous ’50s (think poodle skirts and saddle shoes) pink-and-black design or a black-and-white design with Jackson Pollack-like splattered threads of glaze. Then there’s an earthy ’70s palette with over-the-edge fleur-de-lis poking out from the center lid and each serving tray. “I call it The Onion,” Huberman jests.

Huberman, also the development manager for the Cincinnati Ballet, finds the pottery has functional appeal, too. From laundry room catch-alls and hardware trays to serving dishes and amusing all-course plates at dinner parties, his collection earns its keep.

“If I’m ever invited to a wedding, basically you’re getting a lazy Susan filled with either stuff from Williams Sonoma…or a gift certificate,” Huberman explains. “[The gift] comes wrapped in a lazy Susan.”

Huberman’s first lazy Susan came from satisfied houseguests. The visiting couple chose a vintage piece from their antiques store in Ft. Lauderdale and shipped it to their host as a thank-you. Huberman loved the funky gift. Shortly thereafter, he visited an antiques mall, saw another lazy Susan and snapped it up. That was 12 years ago. Between eBay and garage sale events, Huberman has no problem adding to his stash. Some pieces cost more to mail than their actual purchase price. His most extreme acquisition rang up at $75. But that may be because Huberman finds himself in lonely territory. A vintage-shop owner in Louisville and Mark Fisk of Mainly Art in Oakley relentlessly tease him.

“I asked if they know anybody else [collecting them], and they say, ‘No, you’re the only freak we know!’ And they come in contact with a lot of collectors of weird, mid-century stuff.”

Huberman, who has an entrepreneurial background, threatens to write a coffee table book entitled “Who was Susan, and why was she lazy?” Unfortunately, his research has come up flat as far as any authoritative ideas on the origin of the phrase. Some sources place usage of the term as early as 1912 (Merriam-Webster) and some at 1917 (an ad in Vanity Fair) but they are silent on Huberman’s two big questions. One idea making the rounds is that “Susan” was a generic name for female servants, and since the turntable design efficiently takes away the “work” of passing dishes, we’re left with “lazy”—naturally. Some sources even indicate that Thomas Jefferson designed the first such turntable serving dish.

Maybe so, but I could find no corroborating evidence even after shooting off plaintive e-mails to the historical experts at the Cincinnati Art Museum, Cincinnati Historical Society and the Museum of Fine Arts, Boston. I have yet to hear back from Chicago, Cleveland, Philadelphia, and New York’s museum experts, though I suspect that messages with the subject “lazy Susans” may be relegated to the junk-mail bin.

Nevertheless, the mystery remains. Perhaps this is why the pieces hold such strange allure for Huberman, who denies that he actually collects lazy Susans. “Collect them? No, it’s very scary,” Huberman confides. “People ask, ‘How did you start collecting?’ I really don’t have a collection. I just keep buying them!”