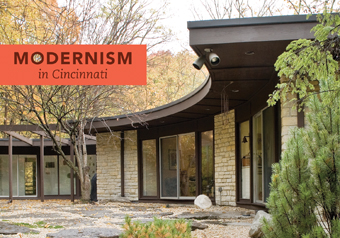 The words are scrawled across one of the sketches in architect Benjamin Dombar’s presentation drawings. Just to the left of Dombar’s signature, the former Frank Lloyd Wright apprentice penciled in the phrase: Good Living.

Dombar lived up to his words in the execution of this 5,000-square-foot home, circa 1965. This architecturally sophisticated Tomorrowland thrills Modern lovers with each and every detail. No exaggeration here. A first hint of what’s to come is the curious, out-of-this-world mailbox at the end of the 700-foot driveway, which turns out to be a stylistic representation of the home.

With the completion of this home, Dombar brought Modern living to the edge—literally. Built in a semi-circular shape, it organically follows along and flows from a steep hillside on a scenic, wooded landscape, a nearly 2.5-acre private oasis within Wyoming’s citified suburbia. A creek bed snakes through the property about 40 feet down from the home site.

“A lot of people say it reminds them of being in the Smoky Mountains,” says homeowner Sherry Roth as she stands outside on an upper-level, wraparound deck. The numinous view—native hardwoods, wild flowers and plants, wildlife, the meandering creek—engages family and friends from almost every room of the home while concealing most other signs of human life. According to Sherry’s husband, Ken, the home gained its tongue-in-cheek nickname, Roth State Park and Lodge, from awed family and friends.

While the outer-arc views offer tranquil forest fare, the inner arc, along the back of the home, focuses on Japanese rock garden serenity. Hefty floating islands of 1,000-pound stones rise from a pond of polished Ohio quartzite pebbles. A crabapple tree makes a lone foray into the stones while selected exotic species such as ginkgo and a Japanese maple create bordering pockets of flora. The back of the garden hosts what appears to be a natural rock formation with waterfall along the rise of the hillside. In truth, it’s a man-made water feature.

“This just looks like it’s carved right into the side of the hill,” Ken says with obvious admiration. “We have construction photos [showing landscapers] lowering those rocks in place, and it’s pretty amazing.”

Serendipity brought the Roths face-to-face with the home in the early ’90s. “We were interviewing Ben Dombar about being an architect for us, and he said, ‘Well, here’s a listing of the buildings that I’ve done,’” Sherry recalls. “You can drive around and look at them and get an idea of the variety.’”

Two of Dombar’s earlier creations happened to be on the market—one in Indian Hill and this one in Wyoming. The curvature of the Wyoming home intrigued the couple, and a subsequent tour “just to look at the architecture” created a sea change. The Roths abandoned their building plans and made an offer on the home instead.

Believe it or not, it wasn’t a fairy tale ending. The couple missed this first opportunity to buy. Another buyer had made an offer without contingencies.
“We were in mourning for the first year,” Ken confesses. A heartfelt note to the lucky new owners, with a respectful request for a “heads up” if the home ever went back on the market, paid dividends just a few years later. The Roths then renegotiated and finally bought their dream house.

Why such persistence? The Roths not only admired the view, privacy and design, but the attention to detail and quality of materials and finishes that went into the home. Dombar recognized the home’s appeal, too. In an exchange with the Roths, he expressed his admiration for the Runnels—the original owners—and the creative process the three enjoyed: “It’s amazing what you can do when you’ve got clients who are more adventurous. When you’ve got more of a budget that you can work with.”

A generous budget means that redwood paneling, naturally resistant to decay and insects, clads the exterior of the home and adjoining carport. The formal entrance with its 4-foot-wide front door is constructed of tiny ¾-inch-square walnut parquet tile, which repeats throughout most of the upper-level flooring.

And just getting to that walnut door is an event. A covered footbridge joins the carport to the entrance.

Ken, a Frank Lloyd Wright fanatic (yep, he takes the family on cross-country trips to tour as much of FLW’s work as possible), sees Wright’s influence here. He explains that Wright often used a circuitous path to find the formal entry and would use structures and design techniques that created a sense of compression. “When you finally arrive inside, you have this sense of expansion, which indicates that you’ve made this transition from the public to the private realm,” he notes.

The home proves his point. Steps lead up from a small foyer into a short hallway that gradually opens into a surprisingly spacious living area. A fieldstone wall with a double-wide fireplace grabs the eye, then—pow—you’re hit by a breathtaking view from floor-to-ceiling windows and sliding glass doors.

Natural light floods the entire home through 17 sets of sliding glass doors and 94 windows. “I wash every one of them myself,” Ken admits. These include several operable clerestory windows that cleverly provide cross-ventilation and emphasize the varying ceiling heights between the inner and outer arcs of the home.

Concealed beneath fascia trim board, fluorescent lighting accents the living room’s perimeter beneath the clerestory windows. Ken notes that Dombar took a page from Wright’s book, aligning the artificial lighting source with that of its natural counterpart.

The home originally used radiant floor and radiant ceiling electric heat (most still operable), so it was built without ductwork, creating smooth, sleek interior lines. “As Mrs. Runnels, the original owner, told me, they were putting this stuff in in the early ’60s.” Ken says. “This was when they were getting ready to build Zimmer. Electric power was going to be too cheap to meter.”

Subsequent owners found that prediction didn’t pan out, so they added heat pumps and ductwork with sensitivity to the design. As the heat pumps lost efficiency, the Roths replaced them with two gas furnaces.

Because they were able to consult with Dombar on occasion and connect with the previous owners, the Roths collected a wealth of information about the home. One of the downstairs rooms, for example, was constructed with 6-inch concrete walls, ceiling and floor. Why? Well, think early ’60s, think Cuban missile crisis, think bomb shelter.

“I think the technology of the bombs has probably exceeded the capability of the house,” Ken quips.

Other original details have a “now” quality, which makes them seem almost prescient. Hinged walnut cantilevers with pendant lighting line one side of a spacious lower-level rec room. The design creates semi-moveable task lighting along a wall-length wet bar/food prep area. Tiny, translucent-green glass tile adorns a master bath with sunken tub. A computer generated the random-color tile pattern featuring various shades of green for the bath’s accent walls. A space-age aluminum pendant light springs up and down in a spacious laundry room for efficient ambient-to-task lighting.

Jo Runnels had the foresight to request smooth, white Formica cabinetry that pops open with a slight push. No handles or drawer pulls to get in the way of cleaning. Hidden appliance lifts spring up from base cabinetry for heavy items, such as a mixer or juicer. The kitchen houses original double-decker warming drawers—still operable. Handy automatic lights that illuminate closets as the doors are opened and a step-saving whole-house intercom system are the icing on this technologically impressive ’60s cake.

Even with the “better living with science” accents, the design focuses on nature and engenders a sense of place. Dombar’s work blends and extends architectural features into outdoor elements. The fieldstone wall, which repeats in the rec room, brings to mind the rocks near the creek. A gurgling, lower-level indoor fountain creates a kindred spirit to the garden’s waterfall. Redwood joists visible in the living room support the home’s roof and reach out like branches toward the forest. Terrazzo tile in the kitchen with crushed pebble-like stone mimics the appearance of the polished pebbles in the rock garden just outside. An attached greenhouse, just off the laundry area, blurs the line altogether.

Other thoughtful features of the home include a built-in copper planter nestled in a bathroom corner—a great idea that keeps floors clean. Four-foot overhangs along the roof protect the home from too much solar gain and rain. A side niche within the stone fireplace wall provides ample space for kindling and logs. A section of the kitchen counter was originally decked with an inlay of marble for candy making and dough rolling. (The Roths have replaced the marble with a slab of granite to match the newly resurfaced kitchen island. Original white tile on the island was replaced, with Jo’s blessing—a concession to an easier-to-clean surface.) Pull-out wooden slabs slide over base drawers to create a handy step-stool surface allowing easier access to top shelves. Fabulous built-in furniture-grade closets and drawers grace every bedroom, and built-in storage even makes an appearance around the perimeter of the carport. The carport also holds a thoughtful historical detail: two gravel-filled pits to catch the oil drips from leaky mid-century vehicles.

The Roths find that they certainly have favorite views (from the rec room) and favorite spaces (the living area) but overall, what strikes them about the house is its architectural integrity.

“It’s an honest house—an honest use of materials,” Ken says. “You see federal-period houses and colonial-style houses, like our old house, and they have non-functional plastic shutters that screw into the side of the house. You couldn’t do anything with them…. That’s what I mean about this being an honest house with an honest use of materials. It’s not something it’s not. It doesn’t have a bunch of applied ornamentation. It’s what Mr. Wright would call the grammar of the architecture. You’ve got this arc that’s kind of the theme of the house. You’ve got the radial lines [defined by the] ceiling joists, the clerestory windows—it’s pretty neat.”