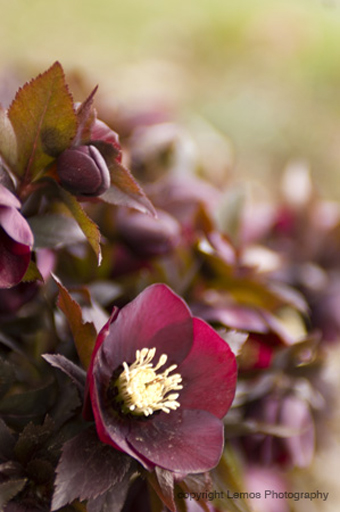 If she hadn’t broken her ankle in 1996, Clara Berger may never have fallen in love with hellebores. But this injury gave the avid gardener enough time to catch up on her magazine reading, and she found herself captivated by an article about Will McLewin. The piece described the Englishman’s trips to Bosnia and Croatia to collect hellebore seeds and plants from these war-ravaged countries.

It was such a compelling story that Berger ordered $100 worth of seeds from McLewin and has been in what she calls a hellebore phase ever since. Today there are hundreds of these flowering perennials in the Anderson Township garden she tends with her husband, Charlie. And while there’s something interesting planted in nearly every inch of the couple’s lush, curving beds, the hellebores step into the limelight during the winter months, when their blooms help brighten up the gray Cincinnati days.

Hellebores are like the early risers of the garden, bravely flowering while other perennials wait out the warm spring sunshine. Many of the varieties in the Bergers’ garden bloom in late March or early April, but some put on a show during sled-riding weather. There’s a ‘Christmas Rose’ hellebore tucked into a stone wall that often blooms in January or February. “Sometimes I don’t even see it because it’s buried in snow,” Clara says. And the foetidus species has been known to start flowering as early as November.

If you’ve never seen a hellebore, it’s a petite plant, often 12 to 20 inches tall, with small leaves and colorful blooms. The flowers bear a slight resemblance to roses, and they come in almost any color you might desire, including pink, purple, white, and yellow.

“Even when they’re finished blooming, people think they’re still blooming,” Clara says. “They just fade to a pale green, no matter what color they start out.” Plus, these plants add understated foliage to your planting beds all summer long.

Hellebores could easily win a beauty contest, but this doesn’t make them impractical. They’re incredibly low maintenance, and because they’re poisonous, deer typically don’t eat them. These prolific re-seeders also multiply to fill out beds, and they easily mix with other plants.

“I think they’re just perfect with hostas and ferns,” Clara says. “You cannot beat them for a nice shade garden.” She’s planted hellebores all across her yard: near the road, against her house and around the base of two large trees. They also peacefully coexist with the wide variety of perennials, annuals and shrubs in her planting beds.

The Bergers became hooked on hellebores after that first $100 worth of seeds, and they’ve kept adding new varieties over the years. Clara’s garden is home to somewhere between 35 and 50 different hellebores, but she estimates there are hundreds of varieties from which gardeners can choose. And people are breeding now for special colors and ruffled flowers, so within 10 years, she estimates that menu will jump into the thousands. You can already find double hellebores, with two rows of petals, and gorgeous speckled versions; eventually there may be as much diversity among hellebores as hostas.

Luckily, the Bergers, who have been gardening on the same one-acre lot since 1962, are no strangers to experimentation, and they’ve identified a handful of hellebore species, encompassing many varieties, that grow well in the local climate. Clara’s favorite species include Helleborus hybridus, a hardy species that comes in almost any color—pinks, purples and yellow, and the Bergers even have a gorgeous one that’s almost black. “It is without a doubt the best variety to have around Cincinnati,” she says. “Absolutely the best.”

Several other late March/early April bloomers make Clara’s best hellebores list. She’s a fan of nigercor, especially the ‘Honeyhill Joy’ variety, because it blooms low to the ground and produces so many flowers that it resembles a small bouquet. This beautiful form makes up for the limited palette of blooms, which are almost always white or light chartreuse. Another good bet is odorus, which has pale green flowers, and mixes in well with wildflowers.

While the ‘Christmas Rose’ (Helleborus niger) is one of the first varieties the Bergers planted, Clara doesn’t think it’s a good choice for Cincinnati, because most people simply aren’t outside in January or February to enjoy the blooms. She does, however, recommend the foetidus, which blooms in November or December, and features charming clusters of green blooms that add variety to your hellebore collection. While most hellebores last forever, Clara warns that foetidus tends to look ragged after a few years, but since it drops babies all over the garden, it’s easy to pull out older plants in favor of younger ones.

If you’re ready to take the hellebore plunge, your best bet is to purchase blooming plants in late March or early April and put them right in the ground. That’s because the seed route takes a good deal of patience. The original McLewin seed batch the Bergers ordered, for instance, took three years to bloom. And if a hellebore isn’t blooming when you buy it, you’ll probably have to wait a year or even two before it flowers. “Plants are just like people,” Clara says. “They have to mature. They have to grow up, and they have to grow through their youth.”

Fortunately, it’s not nearly such a long process to figure out where to place your new hellebores. Since they can’t take the full summer sun, you’ll want to pick a spot that’s at least partially shaded. Berger says they work particularly well underneath deciduous trees, because hellebores like sun early in the year but thrive better in the shade during the long hot days of July and August.

It’s also important to pick a spot with good soil, something with compost rather than hard clay. “The better soil you give them, the better they’ll grow,” Clara says. Hellebores prefer alkaline soil rather than acidic soil, and you might try following a soil maintenance routine similar to the Bergers. They put chipped up oak leaves on the beds in the fall and scatter Epsom salts on them during the spring. The latter adds trace minerals to the soil.
Once hellebores make themselves at home in your garden, they don’t require much care. The Bergers water them in a drought, and the couple heads out in early March, before the hellebores bloom, to cut off the old leaves. This pruning isn’t a necessity, but the plants tend to look better when you make way for new growth. And if you fall in love with these winter blooms, it’s easy to multiply them without spending a fortune. You can dig up mature plants and divide the roots in the early spring or late fall, or simply let your hellebore population naturally grow through re-seeding.

Just think of hellebores as a head start on the gardening season, offering up their delicate flowers when not much else is blooming. It’s a touch of beauty to make those long cold days pass by a little faster—while you’re waiting for the rest of the garden to wake up from a long winter’s nap.

With hundreds of hellebore varieties, choosing the right ones might seem daunting. But Clara and Charlie Berger have found several species that thrive in Cincinnati’s climate. Just take this cheat sheet with you to the greenhouse.

When it blooms: late March or early April
Color: Almost any shade, including pink, purple, yellow, and black

When it blooms: late March or early April
Color: white or light chartreuse

When it Blooms: November or December
Color: green