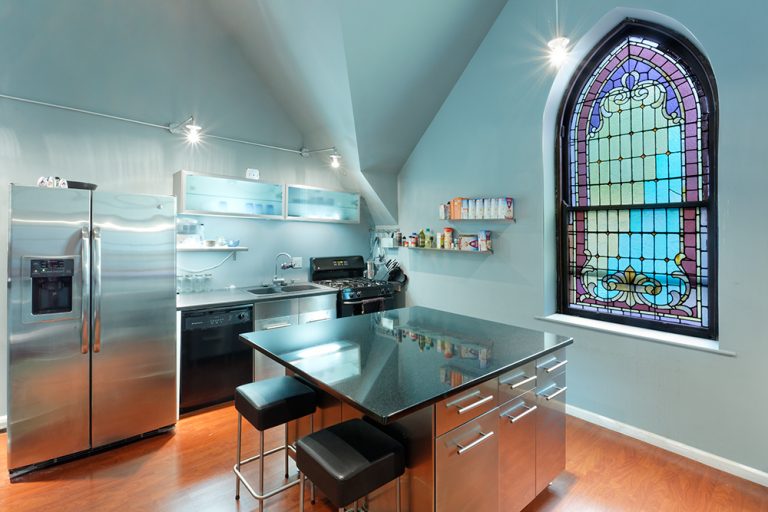 If Don Hogle looks perfectly at home mixing audio in this Northside church’s sound studio, it’s because he is at home.

This techie-cum-rocker—Hogle founded a local Apple service provider called Elan Technologies and sings and plays guitar for alt-rock band The New Void—bought the church on a whim in 2005. Then a Clifton resident, he stopped by during an auction to check out the pews and windows; he walked away owning the entire 1892 structure.

It took two years and tons of elbow grease to convert the 10,000-square-foot church into a home. Hogle had the basement modified to accommodate a six-car garage, a bathroom, and a small sound studio he calls “Studio B”; he also designed a cool two-bedroom loft-style living space, installed surveillance equipment throughout the property, and wired the place to be a smart home (doors can be locked and opened, and the climate controlled, via smart phone).

He initially converted a sizable chunk of the building’s first floor into Elan’s offices; after the company relocated to Kennedy Heights, he began transforming the rest of that level into a performance and recording venue that musicians can rent. The sanctuary has a working organ, backlit stained glass windows, and an adjoining sound studio.

The sanctuary-cum-recording studio isn’t the only creative reinvention of hallowed space around here; the bell tower has new decking and has been plumbed and wired for a hot tub (although the tub itself was never installed). It also affords 360-degree views of Northside, a place Hogle affectionately tags as home to “a diverse group of individuals” that’s very “community oriented.”

Now Hogle has the property up for sale at $375,000 (the listing’s on 1698chase.com). The recording equipment is available for purchase, too, but Hogle points out that it could just as easily be removed, and the sanctuary space re-purposed. After all, not everybody who’s interested in living in a former church is going to have a recording business on the side.