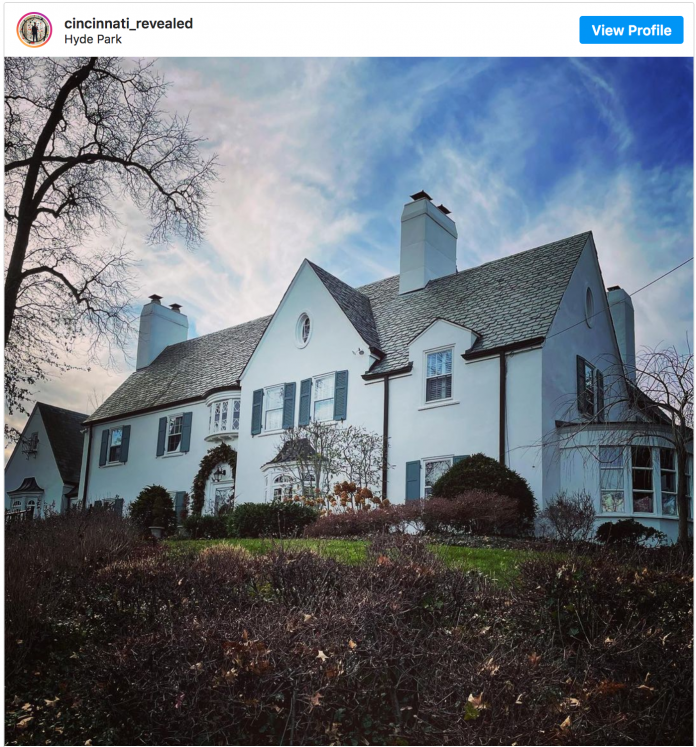 It’s no secret that the Cincinnati area has some of the coolest homes, with history that dates back centuries. We spoke to two Instagrammers who are showcasing stories of our city neighborhoods one Instagram post at a time.

@cincinnati_revealed, by Kevin McCormick
Originally from Clarkston, Michigan, Walnut Hills High School teacher Kevin McCormick has lived in Cincinnati since 1994. The self-taught architecture buff is inspired by Cincinnati and the diversity of the architecture. We asked McCormick about how he gotCincinnati Revealed started and his favorite neighborhood in the Queen City.

How do you find and decide which homes to feature? Do you ever knock on the door and ask questions about the home—pre-COVID of course?

Since beginning my account in 2017, I’ve visited all 52 neighborhoods in Cincinnati and appreciate different elements of each. Most of my photos are taken directly in front of the home and are not exactly covert in nature. When owners are outside I will definitely chat them up about the house—it’s one way to learn more about the history. I typically don’t knock on doors because it feels more invasive than taking a photograph for educational purposes. I have occasionally climbed rugged, wooded terrain for the perfect photograph, however.

Where is your favorite neighborhood in Cincinnati?

What is your favorite home in Cincinnati?

@covington_uncovered, by Heather Churchman
Heather Churchman is a marketing writer and editor by day and an Instagrammer of Covington architecture for fun. Churchman draws exploration inspo from fellow Instagrammers, leading her to some homes in neighborhoods she’s never been. She’s also a sucker for old firehouses converted into homes and homes with carriage houses. She tells us what it’s like to research the rich history of Covington and reveals her favorite neighborhood.

I lived in the Licking Riverside neighborhood of Covington for a while and walking around became a staple activity. At the same time, I noticed some architecture accounts popping up on Instagram that really sucked me in. As I considered what type of thing I could do that was different. I started wondering if I could find out who built this big bungalow on Riverside Drive—a longtime favorite house of mine. I started searching old newspaper articles and I was able to uncover exactly when and by whom the house was built. That became my first post! The man who built the house, Carl Webber, was a bootlegger who used the location near the Roebling Bridge to transport liquor illegally. He ended up at the federal penitentiary in Atlanta at the same time as George Remus, another infamous bootlegger from Cincinnati.

How do you seek out homes to feature? And how do you slyly take pictures?

I have used the word serendipitous to describe my process. I love walking around the city, so I spend a lot of time exploring and taking pictures. [And] I get suggestions from the awesome community of people on Instagram. A few people have sent murder stories to me. I look for stories that are unique, beautiful, and/or tied to Covington history in an enchanting way.

Where is your favorite neighborhood in Covington?

I love MainStrasse. It’s close to where I live and I often walk there. I love the variety of homes, from small to large. People may think of Mainstrasse as just Main Street, but there are so many charming, tree-lined side streets.