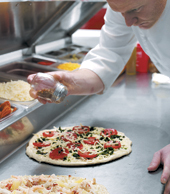 gourmet pizza spot called ZZ’s Pizza Company quickly established a cult following. The narrow dining room with its odd angles and high ceiling was charming, and the owners, Bill Enz and Tom Rehme, had lots of friends and were outgoing and a touch eccentric. And of course, the pizza was tasty. After Enz became sick a few years ago, Rehme ran the place until he couldn’t. So it was welcome news this past October when two former J. Alexander’s managers Ben Chassagne and Justin Kittle reopened ZZ’s. The rehabbed dining room and menu is basically the same, and the food is—well, the food we tried was, unfortunately, just OK. ZZ’s serves traditional-crust pizzas (the crust is house-made and super chewy), and their sauce hits just the right note between sweet and spicy. Two of the pizzas we ordered—the seafood and the shiitake mushroom—were sparsely topped and just plain…plain. The large mushroom pizza had a dozen shiitake slivers at best. The seven-topping combo on the seafood pizza had about seven toppings total, though they tasted superb. As for other items, I’d highly recommend the white Italian bean soup; while the lasagna was rich and hearty, it looked like someone in the kitchen had dumped a small pile of red pepper flakes on it, which dominated the taste. To be fair, we only tried two of ZZ’s nine gourmet pizzas. Give ZZ’s a chance.