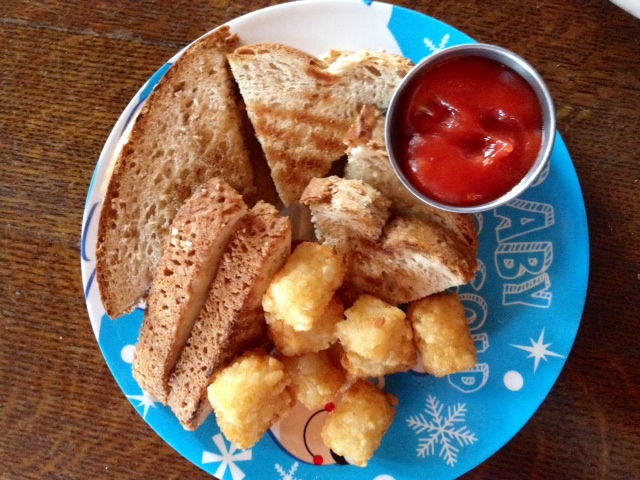 Editorial Note: This restaurant is closed.

Chef Jackson Rouse describes the most recent incarnation of The Rookwood, located in the storied Rookwood Pottery building in Mt. Adams, as an “historic hipster paradise.” While many of us ate comforting family favorites in the rustic, Tudor-style building over the years, the current Rookwood staff subscribes more to the colorful tattoos, flannel shirts, and ironic facial hair of Rouse’s vision. Branding fervor aside, I was more impressed with the food.

At the opposite end of the dietary spectrum was the Garden Burger. Comprised of winter wheat berries and chickpeas, the patty was tender and flavorful. The accompanying challah bun was eggy, yet light, and the handful of slightly bitter baby kale and creamy tahini sauce balanced the nuttiness of the burger. While the standard Saratoga chips were salty and crisp, we upped the ante with an order of truffle fries. Rookwood’s version was tasty, but a little limp. The frittata of the day, mushroom and spinach with truffle ricotta, was also well prepared. The truffle essence was mellow and only intensified the taste of the button mushrooms.

Da Donut aside, the kids’ menu is Rookwood’s star player. Few independent restaurants make any effort to cater to the pint-sized crowd. Rouse, a father himself, has created a quirky selection that rivals the adult menu for creativity and flair. Childhood classics such as macaroni and cheese, peanut butter and jelly, chicken tenders, and burgers (both beef and veggie) benefit from scratch made ingredients and often unexpected twists (think goldfish crackers on a salad with celery, raisins, and apples). The Grilled Cheezer combined slabs of sharp, white cheddar, and house bacon jam for maximum melty goodness. The house made tater tots were the perfect size for chubby little hands and the melamine plate screamed pure parent, sartorial subculture notwithstanding.