Home Baby and Beyond Playing With Food

Five noted Cincinnati chefs talk about how they balance work and family life, and share their secrets for raising healthy eaters. 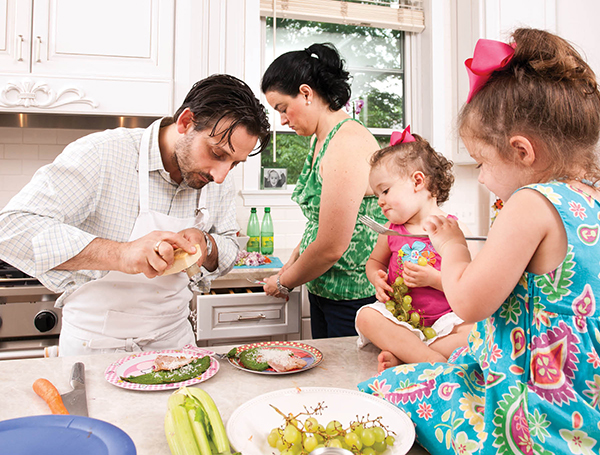 “Food is such a big part of our culture in Italy, even the simple stuff,” says Cristian Pietoso, co-owner and executive chef of Via Vite downtown. “What’s seasonal? What’s good? I want my children to have that experience.”

Pietoso was born in Italy and is the son of another successful Cincinnati restaurateur, Nicola Pietoso of Nicola’s in Over-the-Rhine. He and his wife, Amanda, partner to manage the restaurant and to raise two daughters: Ilaria, 3½, and Valentina, 1½. Because time as a family is always a challenge, the four of them eat an early dinner together three or four days a week, sitting at the restaurant’s chef’s table while the cooks bustle about prepping for the night’s service.

The girls eat what their parents eat. “We don’t give them chicken fingers or French fries,” Pietoso says. “Amanda is very interested in eating healthful food. My children were eating chicken parmigiana and drinking Pellegrino; we made their baby formula with Pellegrino.

“Parents tend to make [separate] things to please their children because it’s easy,” he continues. “But you’re leading them away from what they’ll like to eat at some point.”

Feeding young children grown-up food doesn’t have to be complicated. For the Pietoso girls, dinner might be something as easy as pasta with sauce or a little garlic and olive oil. “Valentina eats like an adult,” Pietoso says. “When she wakes up, she’s cranky until she eats—literally, you see her blooming as she eats. She gets smiley, softer. When llaria eats, she gets distracted easily. She eats like my mother does; her meals are like 2½ hours long.”

By enjoying leisurely meals, speaking Italian at home, and introducing their daughters to simple, seasonal dishes, the Pietosos are re-creating a bit of Cristian’s own upbringing. 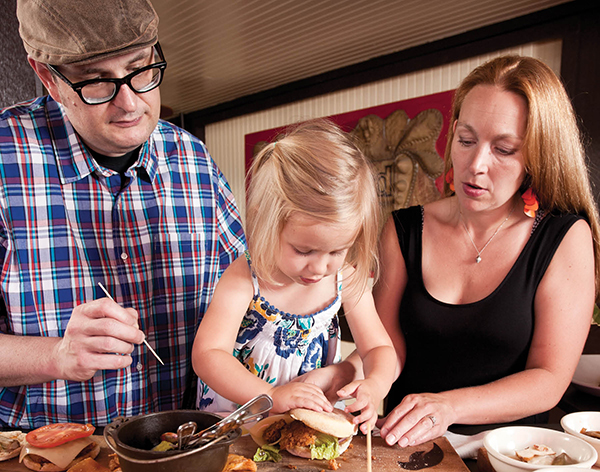 Jackson Rouse has worked in professional kitchens for more than 20 years, and he played in a punk rock band for nearly that long. Until, that is, Quinn came along. Quinn is the 2½-year-old daughter of Rouse and his wife, Meg (who, at the time of this writing, was eight months pregnant with their second child). The late-night lifestyle of a rock musician/chef gave way to early morning wake-ups once fatherhood rolled around. “Staying out late makes the morning rough when a kid gets up at 6:30,” he says.

With Jackson working late nights at The Rookwood, where he’s been executive chef for about 18 months, and Meg pulling shifts of three days on and four days off at Mercy Health Anderson Hospital, finding time when both of their schedules overlap for a family dinner with Quinn takes planning. “I want to make the absolute most of the time I spend with my daughter,” Rouse says.

Rouse manages Quinn’s morning routine: getting her up, fixing breakfast, and packing lunch to take to the sitter. “The first meal of the day is when she eats the most,” he says. “She loves eggs any way. She gets Blue Oven Bakery toast, a whole avocado, some sort of fruit. She eats that every day, and she always asks for it.” You’ve got to admire a dad who slices artisanal Blue Oven Bakery bread for his kid’s toast. “If I was raised on Blue Oven bread, I’d be a much better person,” Rouse jokes.

While Quinn usually eats a healthy and hearty breakfast, Rouse says, the other meals of the day are unpredictable. “At 2½, eating is so secondary for her, and we have good days and bad days,” he says. “But getting her into a routine is key. You can expose them to anything right when they start eating solid food.” 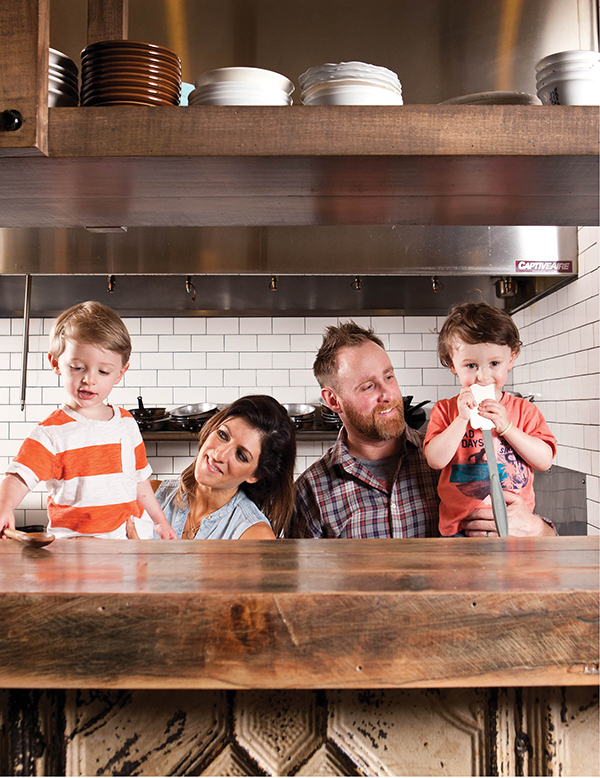 The Wrights are a three-restaurant, two-kid family. Dan and Lana Wright run a growing local food enterprise with the popular Over-the-Rhine spots Abigail Street and Senate (the third, Pontiac, is coming soon), and they parent 2-year-old twin boys Oliver and Knox.

Both Dan and Lana work in the business (she’s director of operations, he’s executive chef), so they essentially trade off shifts, with Lana working afternoons and Dan nights. Dan’s “dad time” is in the morning. The daily routine includes one of the boys “helping” to make coffee: grinding the beans, pouring the water, and pushing the button on the machine.

Oliver and Knox chow down on mostly fruit for breakfast, but their preferences differ. “One of the boys likes crazy stuff,” Wright says. “He’ll eat sheets of nori, he’ll eat everything. The other likes pretzels, avocados, hummus—and that’s pretty much it.”

Like the Rouses, the Wrights prepared homemade baby food: “Lana made purees of roasted fruit and vegetables like kohlrabi,” Wright says. “If you get them accustomed to trying things early, they can make their own decisions about what they like. I don’t want my kids to be the ones who eat only cheese pizza and chicken nuggets.”

Wright, who says his parents were great cooks and who cooked for his family as a youngster, says his preference for feeding his boys whole, organic, homemade foods comes from his background as much as his profession. “Being in the industry did influence what we give our kids,” he says. “But I’m not about eating crap. I don’t eat food out of a jar, so why would I make my kids eat food out of a jar? I want to make stuff from scratch.” 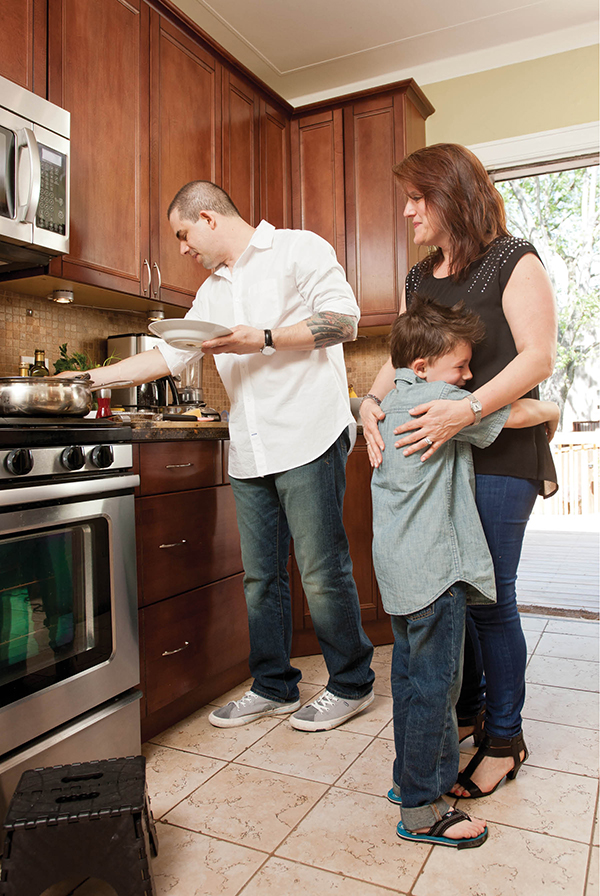 Jose Salazar, Salazar
A Busy Family and a New Restaurant

For Jose Salazar, the newborn in his family is his restaurant, Salazar, which opened in Over-the-Rhine in December 2013. Salazar isn’t new to the business, though; he worked at Per Se and Jean-Georges in New York, and then moved to Cincinnati as executive chef at The Palace before opening his namesake spot.

Not surprisingly, this latest Salazar addition is consuming much of his attention these days, so spending time with his wife, Ann, and their 6-year-old son, Jonathan, takes planning. Like the other chefs, Salazar enjoys his “dad time” in the morning and on Sunday, when the restaurant’s closed.

Despite having a foodie father, Jonathan isn’t super interested at mealtime. “He’s 6, so he’s picky,” Salazar says. “He likes salad, he likes vegetables a lot, and loves grilled chicken or steak—he’s not a fish eater, to my chagrin—and he eats a lot of yogurt and healthy grains. But he’s not very adventurous; he has his favorites.”

While Jonathan is only marginally aware of what his dad does for a living, he is interested in playing in the kitchen at home. He loves making pasta dough and baking cookies with his grandmother, Salazar says, anything where he can get his fingers into the bowl. In fact, that’s a great way to introduce kids to cooking: having them help stir or mix with their hands.

Like the Pietosos, the Salazars don’t prepare a separate meal for Jonathan when they sit down to dinner. “He’s seen us eat good food, and he’s grown up with that, so he asks for about 25 percent of what we eat on a normal basis,” Salazar says. And that’s shaping his eating habits in a positive way, he says. 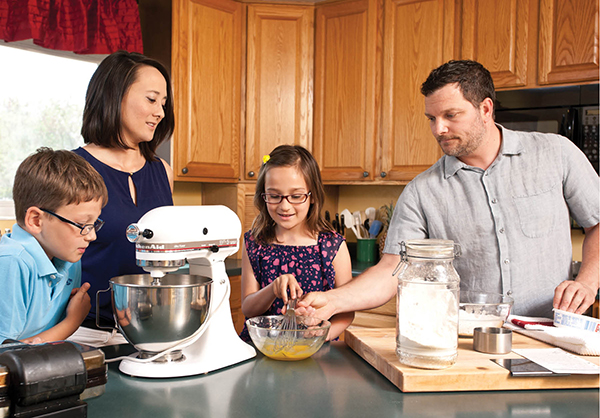 Jim Cornwell routinely bikes to work as executive chef and co-owner of Dutch’s Bar, Bottle Shop, and Larder in East Hyde Park. Cornwell shifted his career path in order to make time to be a parent (with his wife, Nina), to 9-year-old Isa and 7-year-old James. He left the restaurant scene and partnered with Dutch’s co-owners Pam and Jay Ashmore. “It’s 100 percent the reason I wanted to do a butcher shop and be open from 10 to 6,” he says. “I couldn’t pass up this golden opportunity.”

While Dutch’s has evolved into more than just a daytime retail operation (the kitchen serves the adjacent bar with cured meats, burgers, soups, and appetizers), Cornwell continues to put family first. He and his chef de cuisine alternate weeks of working days and nights. The day shift means Cornwell can bike home at 3 p.m. and take James and Isa to sports.

Isa and James like to help out in the kitchen, and of course it doesn’t hurt that they get to eat the products that dad brings home from work. Given the family’s busy schedule, Cornwell tries to prepare a week’s worth of meals at a time. “I do a lot of big-batch stuff, so I’ll make five gallons of bolognese, and we’ll portion it out and freeze it. I bring home the good Parmigiano-Reggiano. They love it.”

Cornwell is passionate about teaching his kids about food—where it comes from, why ingredients matter, and how meals fuel their bodies. “My kids know a lot about food,” he says. “I tell them what this food will do and what the nutrients will do in their bodies. I talk to them about why it’s important to buy the kind of stuff we sell [at Dutch’s], and why we shop farmers’ markets.”