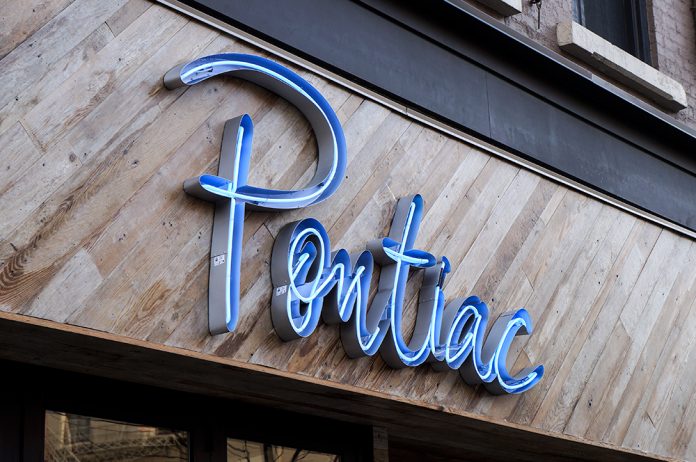 On January 13, Dan and Lana Wright threw open the doors to the much-awaited Pontiac Bourbon & BBQ on Vine Street. Named for the now-defunct Chicago “hole in the wall” bar where the two had their first date more than eight years ago, this neon-lit temple to smoked meat is a well-researched paean to pork and soulful side dishes.

Pre-Pontiac, much of Cincinnati’s barbecue conversation was dominated by either the corporate-themed Montgomery Inn or the maverick East End upstart, Eli’s. In the name of research, Wright decided to head south for a second opinion, and is quick to declare Austin-based Franklin Barbecue “the best brisket out there—until now.” Said with his signature smirk, of course. But what Wright lacks in gravitas, he more than makes up for in game-day skills. His Memphis-style ribs, twelve-hour North Carolina pulled pork, and white oak–smoked turkey breast all reach their carnal climax in a smoker the size of a smart car, which is tucked into the back of Pontiac’s snug OTR kitchen. Hawaiian Punch-based cocktails, a Slush Puppie machine with grape and cherry flavors, and vintage-style tiki glasses filled with concoctions of pineapple, custom bitters, amaro, and bourbon set the bar even higher for cleverly considered casual dining.