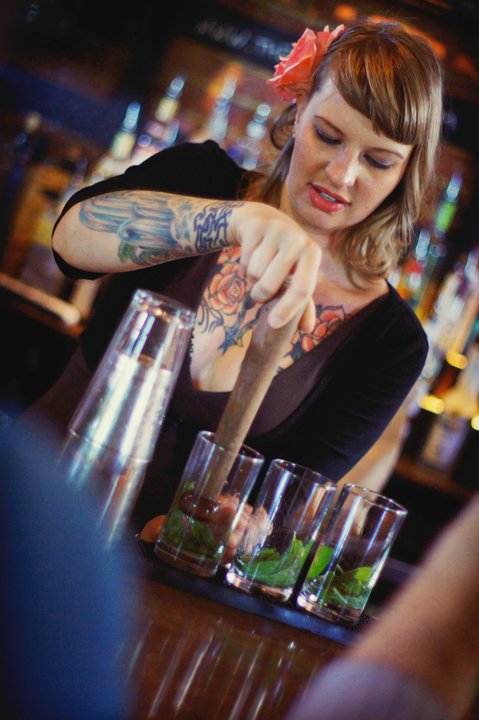 These words, written by Lexington journalist J. Soule Smith over a century ago in a euphonic ode to the marriage of bourbon and mint evoke the allure and grace of perhaps the most iconic cocktail second to the martini. Thousands of mint juleps will be mixed, served, and consumed this Derby weekend, many of them diluted, frat party versions of the ideal. If that’s been your experience, I invite you to try the recipes below contributed by local mixologist Molly Wellmann. You don’t need a horse race to enjoy this drink, just a warm day.

But first, a bit of julep lore and a few tips from Molly Wellmann:

* Wellmann likes to finish the julep with a drizzle of dark rum on top (such as Ron Zucapa or Myer’s Dark Rum) as a throwback to the 18th century version.

4–6 fresh spearmint leaves, plus one for garnish

Place mint in the bottom of a cocktail mixing glass. Add the sugar and a splash of the bourbon (about a half ounce). Using a wooden spoon or muddler, lightly press the mint just to bruise it. Add the remaining bourbon and stir (do not shake) everything together. Strain over the crushed ice and garnish with a mint sprig. Drink slowly and enjoy!

If you are not a fan of bourbon, Wellmann recommends this lighter version.

4–6 spearmint leaves, plus one for garnish

A small handful of raspberries, blueberries, or other seasonal fruit.

2 ½ ounces of sparkling wine or champagne

Place mint in the bottom of a cocktail mixing glass. Add the sugar and a splash of the sparkling wine (about a half ounce). Using a wooden spoon or muddler, lightly bruise the mint. Add the rest of the sparkling wine and stir (don’t shake) slowly. Strain over ice in the highball glass. Gently drizzle the brandy or cognac on top. Add the fruit and garnish with the mint sprig. Drink slowly and enjoy!

Molly Wellmann is a self-taught mixologist in Cincinnati, immersing herself in the history and proper preparation of classic cocktails and fine spirits. Using vintage cocktail recipes as a base, she creates new and innovative drinks containing her own simple syrups, bitters, liquors, and fresh juices. A popular bartender in restaurants and bars throughout Cincinnati and Northern Kentucky, she is also in demand as a guest bartender for private events. In addition to articles in Cincinnati Magazine, Wellmann has been featured in The Cincinnati Enquirer, MetroMix, Cincy Chic, and numerous blogs. She was voted “Best Mixologist / Bartender” in 2010 and 2011 by CityBeat, and “Best Bartender in Cincinnati” in 2011 by Metromix. She is the co-owner of Japp’s (opening summer 2011), located at 1134 Main St. in Over-the-Rhine.  http://www.facebook.com/mollywellmann