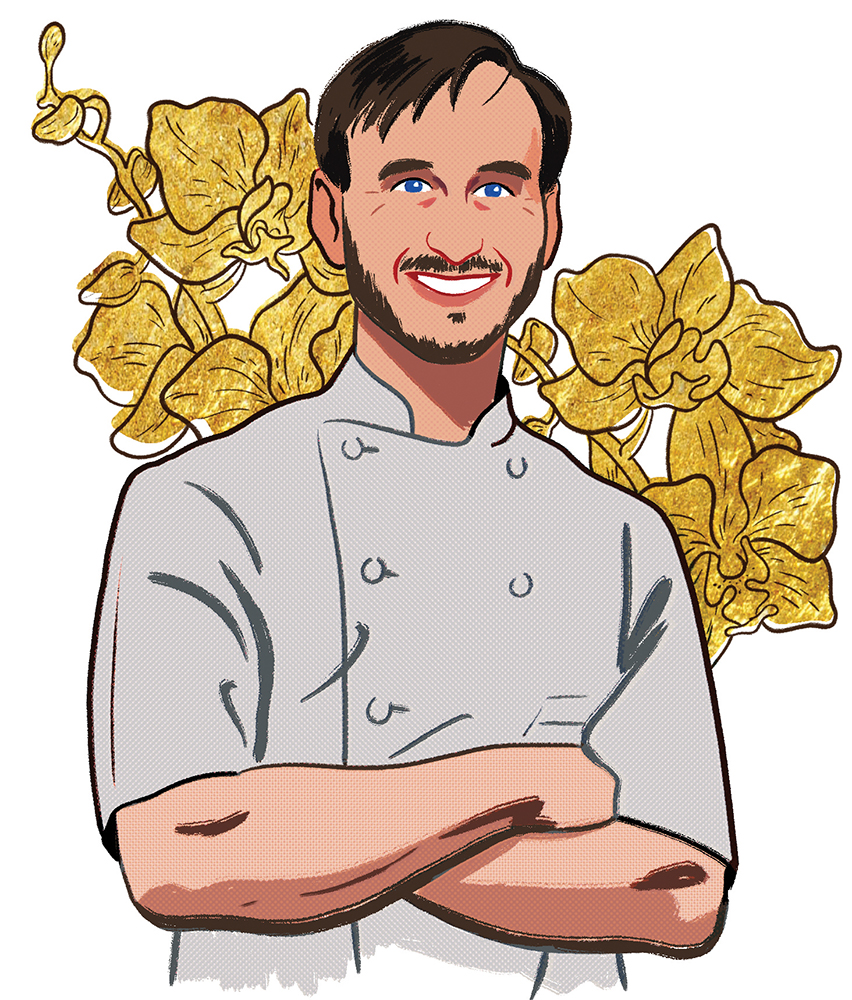 The new executive chef of Orchids at Palm Court is anything but unknown. He’s been preparing for the role his entire career at the esteemed restaurant.

How and when did you transition to your role as executive chef?

It was middle of September [2018]. [Former Executive Chef Maxime Kien was here] about six or seven months; some family things came up and he had to depart, understandably. You’ve got to take care of family first. I’ve been at the hotel for a long time in different roles. I was cook, sous chef, banquet chef, butcher, a.m. sous chef, director of purchasing, and my most [recent] role was helping out in the front of house, and I said, I need to do this.

What was your experience prior to Orchids?

I was a line cook in Pittsburgh in 2004 and 2005, and I moved to Cincinnati in 2006 because I was engaged [to my now wife] and she had a role at Cincinnati Magazine. I said to myself, I’m just a dumb cook; I can go wherever, so I moved to Cincinnati. I came to Cincinnati and I literally grabbed [CM’s Best Restaurants] issue, and I went to the top 10 restaurants and I put my application in to all of them. [After working at Orchids for a few years,] I left for about a year and a half, from 2009 to 2011, to go be sous chef over at [the now-defunct] Local 127…. After I left there, I came back here and reopened the butcher program.

How have your many roles at Orchids over the years prepared you for this job?

They all fed to what is needed to see the big picture. Being a line cook, seeing what those guys go through on a daily basis. I remember thinking when Todd [Kelly] would change menus—he would change menus on, like, a Friday or Saturday—and I thought, I hate you for doing this. But now, I just did a complete menu overhaul and reformat and I did it on a Saturday and added, like, eight new dishes to the menu. The cooks were looing at me like, why? And I was like, you’ll see. It’s a sink-or-swim mentality sometimes. You have to really push [yourself].

All of those experiences, being a line cook, a sous chef, learning payroll, being the director of purchasing—in that role, I saw every aspect of the hotel, from buying the toilet paper to the meat, and that kind of led me to understand the complete operation as a whole and also food and beverage cost control and analysis. The last role I was in was assistant food and beverage director, and I was on the floor in the front of house for about six or seven months, and that was a huge change for me, being out in front of people and dealing one-on-one with guests. It really helped me see that side of the operation, so now I can instantly look at how the service staff is moving, what their facial expressions are, how their pace is, and say, OK, they’re sinking or they’re swimming, or they’re getting backed up and something is going to happen that is going to affect the way the food is being cooked, so I can either tell the kitchen to speed up or slow down to be ready for it.

What changes have you made to the menu?

Within two weeks of me taking over, the menu changed completely from what it was before. We didn’t have first, second, and entrée courses; we just had appetizers and entrées, and desserts down here and the tasting menu over here. What we did was we went to first, second, and entrées. Giving people a guide to choose, [they’ll] be more inclined to choose three dishes. For the tasting menu, we actually went and we—same price—added another dessert and a second course, so we increased what you’ll be tasting. This allowed us to expand and get more creative with a lot of these dishes and open up to a lot more seasonal and fun things.

What is your approach to fine dining?

My approach is classically trained French, but obviously New American. I throw all pretenses out the window. My main thing is: Does it fit the room? You can do the coolest techniques in the world, but if it doesn’t fit the room, it’s not going to be successful. And “the room” is [defined by] not only the space, but also the clientele that comes into that space. It’s really about seasonal and flavors that I know go well together, and then I take it from there and I start balancing off a little bit of harebrained ideas. I start with something I know is going to be a good combination, then [I ask] what is going to make it fun and elevate it to the next level? Is it a technique, a unique ingredient, a stronger flavor, or is it completely reinventing the dish? That is how I approach it.

Do you try to create dishes that challenge your diners?

A little bit, yeah. One thing that we look at is that the menus have to be accessible to everybody. You can throw all the fancy words on the menu in the world, but if its not accessible to a guest, they’re not going to order it.

Was there anything over the years you had your eye on changing?

I always thought that way. I always said to myself, if I were running the place, I would do it this way. And then the opportunity, when it came up and Maxime was leaving, I literally said, it’s now or never; it’s time to either put up or shut up. I had a good conversation with a friend of mine…about lifestyle and family and how to balance that out because he’d been through a similar experience, and he basically narrowed it down to you either are going to do it and be the best that you’re going to [be] or you’re going to do something else, and that’s your decision. That was one of those conversations that stuck with me, so I said, yeah. It made sense.

So what did you change?

For me, I’m very systematic. One thing I immediately started changing was, let’s get back to the classic-style brigade [de cuisine], to the “yes, chef” mentality. It’s not an ego thing. I want everyone to have a good time at work, but you’re also here to do a very particular job, and we have very high standards. Setting that standard bar to the next level was what I needed it to be, and that comes down to everything, from the cooks in the kitchen to the front-of-house staff. It’s saying, guys everything has a particular place, put it there. And I’ve always been a person who leads by example, so for my first month on the job as the executive chef, I was on the line cooking with these guys every single night until they understood what I was getting at…. They went from having 12 dishes to having 21, and so, for me, it was growing it back to where I wanted it to be and this was a good starting point.

How did you see your staff’s mentality change during that period?

Some people flourished, some people did not, but that’s going to happen with any transition. You’re going to have people jump at it and say, that’s exactly what we need it to be, or some say, you know what, this is not what I signed up for. And that’s fine, I’m not going to hold that against you. I’m changing the culture; you all were in a different mindset, a different level of execution. My whole thing is I don’t want to focus on the past. When I started here in 2006 to where we are now to where I want it to go, it’s continually evolving, and for me it’s always about constant reevaluation. Are we doing it the best way possible? If we’re not, why?

As the menu evolves, do you take into consideration the tastes of your longtime repeat diners?

You have to, but you also have to think about who is the next diner going to be? I always want to appreciate the people who have been loyal customers of ours for a long time. I listen to their feedback and I take it into consideration, and there are certain things that I will think about with those dishes. But that’s how you have to think about it—you have your dishes that are a little bit more far-fetched and reaching, but then you have your dishes that are more comfortable.

What can diners look forward to in their visits to come?

Continual seasonal changes, little tweaks here and there, and fun events to come. We’re looking at doing a wine dinner with Opus One, a big-name wine producer out of California. We just did a beer with 50 West, and it’s going to be our flagship beer for the hotel. We’re continuing on with our barrel program for bourbon [with New Riff]. It’s fun stuff like that—beer dinners, wine dinners. Those types of events are going to be fun.

How much pressure do you feel to maintain the national accolades?

Immense. Forbes and AAA are something that—they don’t keep me up at night, but they’re always on my brain. When you look at your operation and you fix the problem here, it shows a problem over here. It’s continual advancement of everything from back of house to front of house. It’s a strive for perfection, and that’s what everyone working here is on board for. January 1 started our Forbes review season, [meaning] we could be reviewed by Forbes at any point for the next six to seven months. We don’t know when they’re coming, and it could have already happened. That’s why I express to my sous chefs and my cooks, if the dish isn’t perfect, it doesn’t leave this kitchen. I don’t want to waste food, but I’m not going to send out something that’s going to compromise what we do.

Do you appreciate having that motivating force?

It’s a vision, and whatever that vision is going to be—whether it’s a Forbes rating, an AAA rating—you have to have that vision. If you don’t have that vision for your team, they’re just going to be working toward nothing. If that vision is a rating system or personal growth or a hotel vision of this is what we want to offer our guests every single day: excellence in service in food and beverage, then that’s the vision. Make it happen.