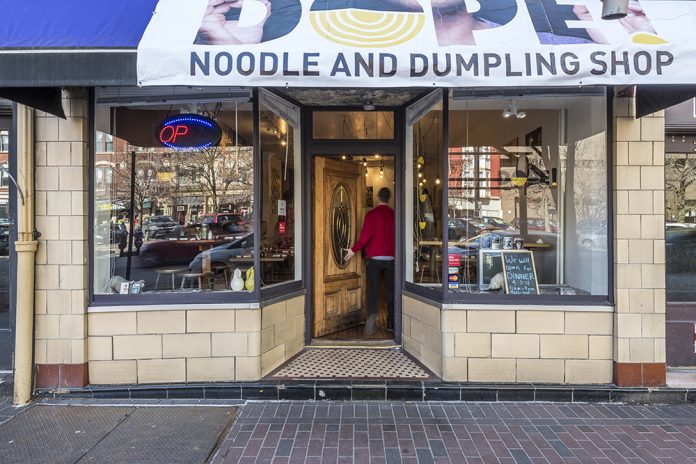 The local restaurateurs behind Lalo, Huit, and Neuf are back at it again with a new downtown lunch spot. Dope! Noodle and Dumpling encapsulates the cool, carefree spirit of ’90s pop culture. (Looking around the dining room, its walls lined with CD jewel cases featuring Boyz II Men, Spice Girls, and other millennial childhood staples, it’s easy to imagine the decor was rescued from a box in mom’s basement.)

To savor the two namesake items as a duo, order the pork-, chicken-, veggie-, or shrimp-filled dumplings (pan seared or steamed), “make it a noodle soup,” and customize with one of five flavor add-ons for a lunch-friendly $8. Word to the wise: Devour the floating dumplings right away; they’ll fall apart in the broth before you’ll finish the enormous portion. Other dishes are aptly named: Notorious V.E.G. Dan Dan Noodle, Baby Got Beef Noodle Soup, and Wu-Tangy Chicken Noodle are popular mainstays with surprisingly traditional accoutrements. The concept is a bit gimmicky, and the theme really has nothing to do with noodles or dumplings, but it’s loads of fun. When modern life starts feeling a bit mundane, you’ll longingly wish to return here for comfort. Sure sounds like the ’90s, doesn’t it?