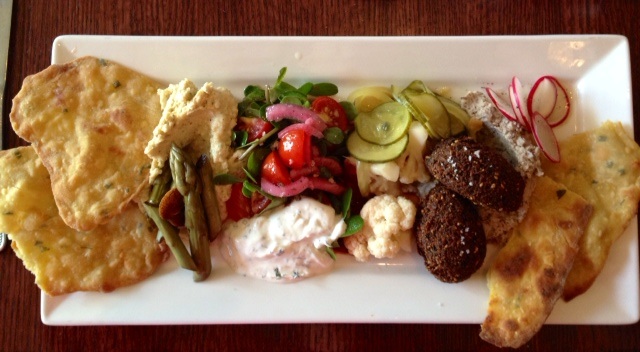 Editor’s Note: This restaurant has closed.

I love to see a brunch branching out. The Benedict has become so ubiquitous on local menus that I’m rarely tempted unless Blue Oven English muffins are involved. The frittata is also a no-go, as it’s what I make at home when I need to clean out the fridge—not something I particularly want to order at a restaurant. Truth be told, I was feeling a little jaded by brunch staples until we went to Nectar and I devoured a falafel feast for breakfast.

Unless you’ve been living under a rock, you know that Julie Francis—patron saint of farm-to-table cooking long before it was cool—is one of the most creative chefs in the city. So it should come as no surprise that her brunch is good. But it’s not just good; it’s incredible. In Francis’s hands, the basic French toast becomes a lush and boozy bombshell. Thick slabs of sesame semolina bread are heavy with custard and layered with honey-orange mascarpone, hickory smoked bacon, candied almonds, and a Champagne-braised fruit compote.

In a culinary about face, I must also plead the case for Francis’s falafel. Didn’t know that you wanted an entire Middle Eastern edible landscape with your coffee at 10:30 am? Trust me, you do now. Generous schmears of hummus and ful (a pureed fava bean spread) anchor a rectangular plate laden with pickled cauliflower, cucumbers, and asparagus. A purslane salad is tossed with olive oil, tomatoes, and pickled red onions, and an herb-inflected yogurt sauce is the cool companion to a dab of fiery harissa. Four options in which to dip your falafel and housemade cracker-bread—does life get any better?

If you’re a more basic, eggs-and-potato guy, she’s got you covered too. Soft and fluffy scrambled eggs gain richness and complexity from chorizo and caramelized onions before being slathered in a tomatillo and chipotle salsa. The accompanying pimento-scented spuds have just the right level of heat and salt. And while fruit salad isn’t exactly earth-shattering, Francis’s addition of ground allspice to the medley makes for a much more interesting upgrade.

While the Brunch Report must go on, and there will surely be other menus worth mentioning, this is one brunch that will be a real bitch to beat.