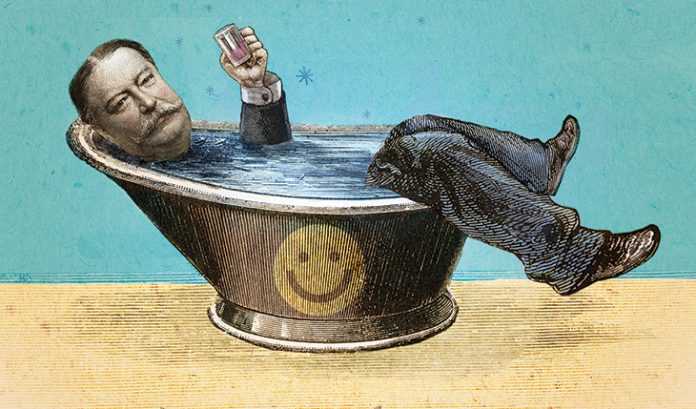 In her last tree-killer of a book, Team of Rivals, Doris Kearns Goodwin evaluated the most beloved American president on the shelf, Abraham Lincoln. A superstar. Somebody we all know and hold 10 (or 50) assumptions about. Daniel Freaking Day-Lewis, yo.

Which is why it is initially so puzzling that the unlikely heart of Goodwin’s fine new tome, The Bully Pulpit: Theodore Roosevelt, William Howard Taft, and the Golden Age of Journalism, is Cincinnati’s own goetta-fabulous Taft. I could walk out onto Fountain Square right now and quiz a parade of Cincinnatians about what they know of our homegrown president, and the answers would likely embarrass a Jimmy Kimmel audience. Resident of the Taft Museum? No, that would have been Charles Taft, his half-brother. Didn’t he build Kings Island? No that would have been his descendant Dudley at Taft Broadcasting. And just who is buried in the Taft Theatre?

There is one thing, perhaps the only thing, people are likely to know about the man today: that unfortunate business about the bathtub. Taft was so rotund (he weighed 335 pounds, which is probably less than Chris Christie) that on one famous occasion he needed aides (and by one account, butter) to extract him from a tub so vast it was featured in the February 1909 edition of Engineering Review.

Nothing shows off Goodwin’s skill as a writer more than her ability to bring to life somebody who, sad to say, barely lives in our collective memory. Spoiler alert: He turns out to be an amazing, likeable guy. By page 20, you become acutely aware that you are going to end up feeling sorry for this endearing fellow. A few hundred pages later, you may be stocking up on comfort food and tissues to deal with all the dashed expectations. Goodwin pulls Taft out of that bathtub and reanimates him for a new age.

Taft—or “old butterball,” as the kids in Mt. Auburn called him in the 1860s—studied law and even wrote some journalism in town. He met University of Cincinnati student Helen “Nellie” Herron, whom he would marry and dote on for the rest of his life. (Goodwin sketches a Nellie far more interesting than the cravenly ambitious figure of past accounts; she comes off as one of the most interesting first ladies in U.S. history.)

Methodical and contemplative, Taft was far more suited to be a great Supreme Court Justice (the job he landed after his presidency) than the commander-in-chief. He had an affectless passion for people, but was no scene-chomping dirt devil like TR. In Taft there lingered shadows of self-doubt, procrastination, and anxiety that he was never quite ready for his moment.

The Roosevelt stuff is easier to tell; it picks up steam when Teddy comes back from a year-long African safari to run a third time for the presidency, challenging Taft, the sitting Republican, in the 1912 election. After a brutal primary and convention battle, Taft secured the nomination and Roosevelt peeled off and formed the Bull Moose Party. Looking back on it today, it’s a little like when Morrissey left the Smiths to go solo: Exactly what part of his ego wasn’t already getting stroked? The campaigning was ruinous to both men’s political careers, and led to the election of Democrat Woodrow Wilson.

The enmity between Taft and Roosevelt has long been noted, but Goodwin does a rich job of showing us all that came before, making use of the more than 400 letters the two men wrote to each other. It was a friendship of “sweet intimacy,” in Taft’s words. After helping his buddy get elected—by editing his speeches and feeding him daily advice—TR beamed, “I cannot express the measureless content that comes over me as I think that the work in which I have so much believed will be carried on by him.” That loving feeling didn’t last.

A newspaper editor said of Taft, “he looks like an American bison, a gentle, kind one.” No less a know-it-all than Henry Adams declared Taft “the best equipped man for the Presidency who had been suggested by either party” during his lifetime. So why was he voted out of office after a single term, and why did Roosevelt turn so rancorously on his dear friend? The most obvious answer is found in TR’s inability to comprehend anyone following his act.

Goodwin lays out Taft’s considerable accomplishments: defusing an explosive international situation as a beloved Governor-General of the Philippines and prosecuting far more trusts than Roosevelt, who still gets top billing as the “Trust Buster.” But Taft was a lousy public speaker and fumbled relations with the press. In a time when newspapers were thriving, photography was the new new thing, and investigative reporters had readers hanging on every word, Taft became the Buster Keaton of the Beltway, a sad gentleman with a gift for pratfalls. His image never recovered.

“I think mainly people know very little about him,” Goodwin said by phone as her book tour began. “It was such a pleasure for me to understand him, feel empathy for him, find him a lot more important and interesting than I knew, even if falling short as a public leader.”

DreamWorks is apparently planning a Steven Spielberg movie based on The Bully Pulpit. I bet they are already talking to Tom Hanks for the Teddy part—but who would play Taft? Dear Lord, please not John Goodman. Maybe somebody like Philip Seymour Hoffman, or, better still, how about Nick Offerman from Parks and Recreation? He’s got the low-fidelity self-awareness, he’s a good guy down to his sneakers, and he sports noteworthy, non-ironic facial hair. Most of all, he knows how to take a fall while still keeping that twinkle in his eye.