Home Things To Do Summer 101

Andy Heldman, local hiking aficionado, on navigating urban trails: “I first started hiking seriously in the early 1990s. At that time I would take long walks from my home in Blue Ash. Soon, they became so long that I started calling this activity ‘urban hiking.’ I would start walking, and just not seem to want to stop—so I’d end up in Newport, or Milford, or even once in Lebanon. This activity was not real popular with my wife. Invariably, upon reaching some far destination, I would call and ask her to come pick me up. She grew tired of this routine and started asking me to hike along bus lines. This was before Uber.”

Drew Macke, owner of Aston Oaks Golf Club, on golf gaffes: “We had this one guy who came in every week to play until he was 91, and one day he comes in and says, ‘My cart is making a funny sound, can you check it out?’ So we put it up on the lift and there’s a sign stuck under his cart that says ‘No Parking in this Area.’ He’d been dragging it around the whole course. [Another] time someone got stuck in the lake on the course and we had to call 911 to get them out. They waded in to get a golf ball but had gotten stuck in the mud. They had to wait 45 minutes until the next group came around to that hole to get help. He wasn’t the first one to get stuck there, either.” 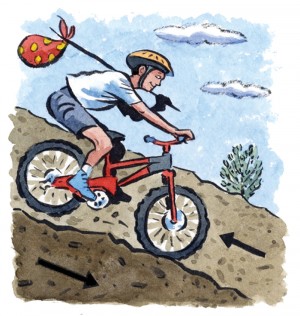 Justin Travis, program director at Ohio Dreams action sports camp, on growing to love BMX: “One camper came from California with a mountain bike to ride the trails. He got homesick and wanted to leave, so he gets on his mountain bike, rides off. We had to go get him. Next week, his name comes through as a two-week camper. He had a blast riding. Next year, he applies for one of our jobs at 16, worked for four weeks, did awesome. This year, he’s only 18 years old and we made him shop manager in charge of the dirt crew. He went from a kid who was running away from us, to a kid who’s now managing a six-person team.”

Joey Oberholzer, general manager of Loveland Canoe and Kayak, on paddling dedication: “Canoeing used to be the most popular, but in the last five years kayaking has overcome canoeing because people like the fact that they can do it themselves. This year, we got our boss, Mark Bersani, to get a tattoo that four of the staff members have. It’s a profile of a guy holding a canoe on his shoulders, the same way we carry ours. We made a bet with him mid-summer, because we were really slow over the summer, that if we hit a target number, he would get the tattoo. The tattoo guy even did it pro bono. That was awesome. It never feels like work here. We’re always having fun.”

Christopher Mann, owner of The Woodhouse Day Spas, on spa etiquette: “We’ve had some interesting situations over the years, but one of the more common things is guests who disrobe and then lie on top of the sheets instead of under them. Apparently it’s a very European thing to do, but maybe not so much here in Cincinnati. We also had some instances where guests get super relaxed after a massage and begin to wander around aimlessly, opening treatment rooms and bathroom doors without regard. We call it ‘massage brain.’ It’s astonishingly common.”