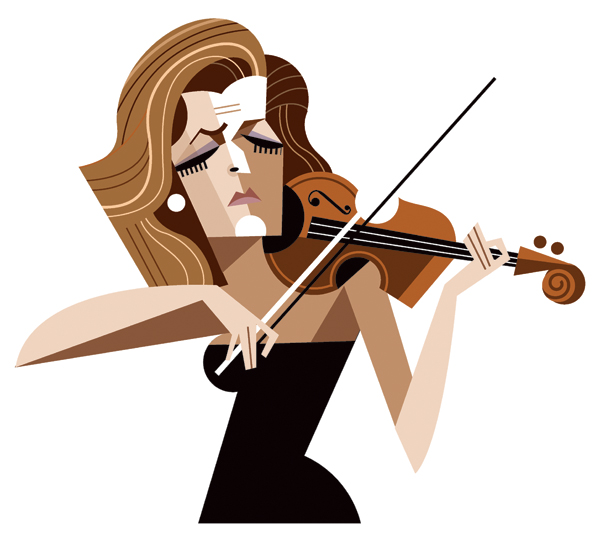 Anne-Sophie Mutter is one of the greatest violin virtuosos of our time. Mutter, 50, debuted at age 13 and two years later made her first recording in her native Germany with Herbert von Karajan and the Berlin Philharmonic. On September 28, Mutter will appear with the Cincinnati Symphony Orchestra, playing the melancholy Dvorak Violin Concerto, the focus of her latest CD. We caught up with the four-time Grammy winner after a long day in the recording studio.

Isn’t this your first recording in more than two years? Yes, but the project has been in the pipeline for many years. We did the recording in Berlin under extreme time pressure [four days]. For me it’s the best way to record, because it’s pretty much like a
live performance.

Whose idea was it to keep a video blog during the recording? Deutsche Grammophon’s. I am actually a very private person so you won’t find me on Twitter or Facebook, but I caught on to this idea. It felt right to share some information about the piece and my personal ideas. I’m not going to blog on a continuous level, just for causes to help my foundation and to attract young [string] musicians to apply.

What kinds of help does the Anne-Sophie Mutter Foundation provide? Our main goal is to help young scholar musicians select an instrument for a lifetime and help them plan financially so it’s achievable to take ownership.

Don’t some of those instruments cost millions of dollars? Well, we are not able to buy a Stradivarius because those prices have exploded in a way that is not achievable. We are talking about mostly French instruments, which are very good and affordable if you pay for them over a period of time.

As a young musician, did you have that kind of help and encouragement? Finding the right instrument proved to be a rather painful exercise. There are organizations throughout Europe, particularly Germany, that have great funds and are very willing to help you borrow a wonderful instrument, but they generally have very strict rules that after a rather short time, you have to give it back or reapply to keep it. You’re always afraid they’re going to take the instrument away from you.

Are your parents musicians? No, I’m the first musician in the family. There is a great love for classical music, and I had a French grandfather who was a self-taught pianist, but it took several generations for someone to be crazy enough to announce at age 5 she wanted to be a musician.

You knew what you wanted to do at age 5? Yes [laughing]. For my 5th birthday, I said I wanted violin lessons and basically after the first lesson, I told them I wanted to become a violinist, though I’m sure they didn’t take me seriously.

Your musical partner in the CSO concerts will be guest conductor Ignat Solzhenitsyn, son of Russian writer/dissident Aleksandr Solzhenitsyn. Is this the first time you’ve performed together? Yes, although I met his father in the mid-’80s, and we were quite good friends. Ignat is an extraordinarily gifted pianist and conductor. I’m very much looking forward to our first collaboration in Cincinnati, because he’s been on my radar for some time.

Before I let you go, I have to ask you about your dachshunds, Bonnie and Clyde, who horned their way into your video blog. Are they harsh critics? They do have a preference for 18th and 19th century music, but are not great fans of contemporary music.

Do they start howling? Actually, they’ll just walk out of the room. When I start playing Mozart, they come back in.

Originally published in the September 2013 issue.