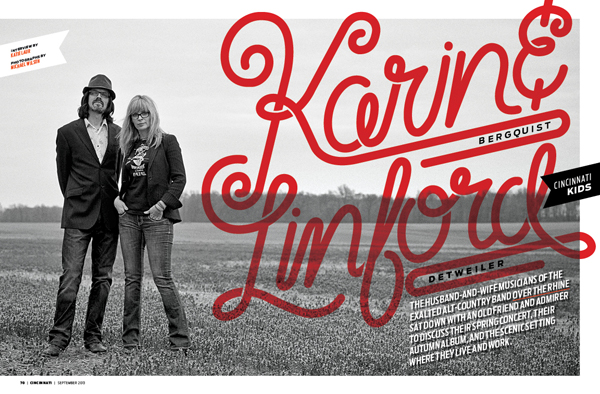 I met Karin Bergquist back in the early 1990s before Over the Rhine—the group she formed with Linford Detweiler, her future husband—officially existed. My radio show, Music from the Hills of Home, was on WNKU from noon to three on Sunday afternoons, and Karin told me about how she’d get in her car and drive east toward Georgetown until she lost the WNKU signal, then she’d turn around and drive back to Cincinnati. She did this every Sunday, because, as she told me, I played women artists—interesting female performers that she didn’t hear on other stations—and she wanted to know what they were doing. She liked Iris DeMent, a young Philo Records artist, and she liked Nanci Griffith, who did “Love at the Five and Dime.” I was glad to have that kind of feedback; I had been going out on a limb playing women who were not considered strictly bluegrass. Eventually Nanci Griffith and Iris DeMent became significant names in folk music. But in my mind, Karin Bergquist has outdone both of them.

When I met Linford Detweiler—as I recall, we got together for lunch at Kaldi’s almost 20 years ago—I found myself equally charmed by him, drawn to his intelligence and to his measured way of doing things. When we talked he paid attention, his head cocked, his shaggy brown hair just brushing his collar as we discussed music, first and foremost. Most musicians are endlessly fascinated with music and can swap names of groups and musicians for hours: Who’s your favorite band? Whose songwriting skills do you admire?

Linford was a remarkable young man who had the good fortune to meet his soul mate. He understood her gifts, and she understood his. The magic of what the two became when they came together to form Over the Rhine was due in great part to the way that Linford was able to translate Karin’s vibe into an ensemble style using different musicians. From the first, they took Cincinnati by storm. I can remember being at concerts watching as their young fans laid flowers on the stage as reverently as Europeans do.

When Over the Rhine started their annual Christmas concerts in 1994, the price of admission was a small fee and a can of food that the band’s friends collected in large round containers. Now they have a long list of albums with luminous names—The Long Surrender, The Trumpet Child, The Darkest Night of the Year—and at Christmas they sell out the Taft Theatre at $30 a ticket, with a waiting list of swells who try everything to pull strings to gain admittance. But those who have been around the band understand that influence isn’t part of the agenda. Having “pull” isn’t an important part of the Over the Rhine experience.

Time passes like the mile markers on Route 50 headed east to Nowhere Farm, where the two have lived for the past eight years. There will be another Over the Rhine album coming out September 3, as well as a launch concert on September 13 at Coney Island. This promise of new music was a good excuse to visit them in their historic home this spring, where they were planning a May concert to thank the fans who have kicked in funds to put the record out.

A few weeks before that event, I sat down with them to reflect on the work that has shaped their lives for the past two decades. I realize that I haven’t heard all their records, and I’ve missed some performances. But it doesn’t matter, because I am part of the whole. I have been there since the beginning.

I heard you guys are getting ready to have a concert out here on the farm. Karin: We are. We’re gonna go the Levon Helm Midnight Ramble route. It’s part of the fund-raiser to make the record. But we won’t be able to hide anymore. I can’t run around naked out here anymore, Katie.

Well, I didn’t know that was going on. Linford: There was a chain smoker who had lived here [before Detweiler and Bergquist bought the house]. And he was scared to death of mice, so he took mothballs and threw them all through the house just to keep the mice away. My brother said it smelled like a well-preserved ashtray. But, ugh, we had to rip a lot of stuff out and start all over. The only thing we had in the way of plumbing was a utility sink and a toilet with no seat. So we ran a hose out to our cherry tree and I rigged up a shower that would come out of the cherry blossoms. It was quite romantic. We had to get the angle just right so that the neighbors couldn’t see us.

I trust you did that, or it would have been all over the papers. How long have you been out here? Linford: Eight years. Karen said she wanted a place where she could sit on the porch, hear the birds, see a few trees, and nothing else. She was ready for a break.

Do you still get calls from around Cincinnati to do stuff? Linford: We get a lot of invitations, but we try to be careful about not over-playing our hand. We have a big Christmas show every year and maybe a summer show.

Tell me about the concert here. Linford: We have been talking for years about [having people] come out for an evening and play some music. It’s the night of the supermoon rise. We’ve got our fingers crossed that it will be a clear night, ’cause that is worth the price of admission.

Wow. And so is the admission limited to people who have paid to participate in the record? Linford: Yeah. [When we made] The Long Surrender, which was our last record, we came up with the idea: What if people would buy their copy in advance? And then we wondered, How many people would give us 50 bucks if we sent them demos so they got a preview of the record? And then we said, I wonder how many people would give us $100 if Michael Wilson helped us do a big fancy package with a box and book of his photographs? Somebody said there might be people out there that want to give you more than that. So we said, “If you give us 10 grand, we’ll come play a concert in your home.” And one couple in Austin, Texas, whom we had never met, wrote us a check for 10 grand. To help make a record.

Oh my God. Karin: So this year, if you can donate $200, you’re welcome to bring a friend and come to our home for a special concert. That’s really how we paid for our record.

What is the new album called? Karin: We’re thinking we might call it Meet Me at the Edge of the World, after one of the songs I wrote. Linford is singing with me. I’ve been begging. Linford: It’s like we started a new band.

Well, the band always was the two of you. That arrangement worked so nicely, to hire sidemen for whatever you needed. Karin: It’s how Nashville functions; people mix it up a lot more and it keeps it fresh. Linford: It has really freed us up to just focus on the music. Karin: Mostly it’s just about chops. And who can stick it out. And not everybody does well on the road, you know.

What musicians do you usually tour with? Karin: It depends on the record. When we got in the studio to make [the new album], we went in with Jay Bellerose—the great drummer who helped make the last record—and his girlfriend, Jennifer Condos, who plays bass, and Eric Heywood on pedal steel and electric guitar—all really great. So the core of the band, the people that were there [in the studio] for all six days, were Jay, Jennifer, and Eric. Jay and Jennifer swore off touring this year, but about two days into the project it was going really well and they liked the songs so much that Jay came over to Linford and said, “We’d like to see this through and go out with you if you guys go on tour for the record.” We were just over the moon. Linford: It’s a rare opportunity to tour with the band that made the record. It’s going to be exciting.

To get into a working relationship that just feels good—it’s everything. Karin: It really is! You can get up every day and do what you’re born to do with people who love it.

I heard the plan was to bring out a Christmas album too. Is that still going to happen? Linford: That’s still the plan. We’re trying to figure out when to slot the recording session.

That Christmas concert is always such an incredible example of how loyal your fans are. Linford: Well, we got a little bit lucky at the beginning because I was just obsessed with the idea of letter-writing.

Letter-writing? Linford: Whoever was finding our music, I wanted to figure out who they were and get ’em in the same room talking to each other. So we wanted to have a mailing list of some kind. And that was kind of a radical idea in the early ’90s. But we immediately started gathering addresses. So after several years of hard work we had about 10,000 names on our newsletter mail list.

I remember those newsletters! Linford: Have you ever tried to mail out 10,000 copies of anything? Going to Kinkos, inviting all your friends over, sitting around for hours licking stamps.

It was a brilliant move. Linford: And it was expensive. But in the mid-’90s, a fan of ours from MIT explained to us that there was this weird thing called e-mail. And he did an e-mail account for us; we were one of the first bands to have an e-mail account. It sure is a lot easier than stapling together newsletters.

That was when you were with IRS Records. Linford: Yeah. And the best thing that ever happened to us was our label closed. It got shut down right before we were getting ready to record our fourth record, Good Dog Bad Dog. We had given them our first three records, which we don’t own to this day, and we realized that with Good Dog Bad Dog we could put this out and we would actually own our own music. Which meant putting it in the trunk of the car and taking it to the gigs. And amazing things started happening. It ended up out-selling the three records combined that IRS had put out.

Moving to the country, starting your own label: I think all these steps you’ve taken have been really wise. And now you have the new album. It kind of ties it all together. Linford: All the songs grew out of this chapter out here on the farm, these eight years. For instance, there’s a song called “Favorite Time of Light.” In the evening out here, everything kind of starts to glow. We started calling that our favorite time of light. And Karen wrote a song about her funeral wishes called “Wildflower Bouquet.” She gave me directions one time when she was getting ready to fly off on a plane. In case something went terribly wrong, she said: “Burn the journals, drink the wine, give the dogs a good home.”

I hope that’s not coming. Karin: Well if it is, I’m ready. Got my song written.

Originally published in the September 2013 issue.