You could build a pretty good Cincinnati music trivia question around Peter Greenberg, guitarist for Barrence Whitfield & the Savages, and country music legend Merle Travis. In 1943, under the name Bob McCarthy, Travis released the second-ever 78 on King, the Queen City record store-turned-quintessential record label. In 1978, Greenberg’s band the Customs released the second-ever 45 on Shake It, the Queen City record label-turned-quintessential record store. Greenberg’s short-lived group remains an international underground favorite, so much so that in 1997 Shake It released a 17-track Customs anthology, Real Long Gone, and the band played a reunion show at Southgate House in 2008 for their 30th anniversary.

A graduate of both Wyoming High School and the University of Cincinnati, Greenberg made his other claims to rock and roll cult fame in Boston: with post-punk garage pioneers DMZ and Lyres (both with singer/organist Jeff “Monoman” Conolly), followed by the Savages, which he formed in 1983 with R&B/soul shouter Barry White (a.k.a. Barrence Whitfield). In 1986, after two albums, Greenberg quit that band for a civilian life, working for various energy and utility companies in New England, Texas, and New Mexico. The Customs reunion, and a reissue of the first Barrence Whitfield & the Savages record, brought him back to music, and in part to the Queen City. All of the band’s recent records, including the brand new Under the Savage Sky (Bloodshot), were recorded at Ultrasuede Studios in Northside, and Savages drummer Andrew Jody is a full-time Cincinnati resident. We spoke to Greenberg by phone from his home in Albuquerque about his rock and roll pedigree, longevity, and his sizable record collection.

You moved to Cincinnati from Boston at the age of 15 when your father got a job at U.S. Shoe Corp. What kind of music were you into then? I was really into a lot of the same stuff I still like: blues and the MC5 and the Stooges and Flamin’ Groovies. Me and my friends at Wyoming High School would get together and listen to those records and stare at the covers. Everybody else was listening to Pink Floyd and Traffic, stuff I didn’t really like.

So how did you end up in back in Boston, where you joined DMZ? I went to Kent State for a year, then transferred up to Emerson College. A lot of my friends from Cincinnati were originally in DMZ. Adam Schwartz, another kid from Cincinnati who was going to BU, was the singer before Monoman. And my best friend from high school, Mike Lewis, played bass. He was going to MIT and lived in a frat house, and that’s where DMZ rehearsed. He quit to stay in school. I quit school to stay in the band.

DMZ were eventually signed to Sire, home of the Ramones and Talking Heads, and the band’s only record was produced by Flo & Eddie, the duo at the heart of the Turtles. But it was not a good experience, I gather. I was too young to know any better. There was a lot of drugs. During the blizzard of ’78, we were trapped in the studio for a week with Flo and Eddie, an ounce of cocaine, and a pound of pot, emptying vending machines for food because the roads were closed for days. The record just didn’t come out the way I wanted it to. Things were getting too crazy and I needed to get out. I moved back to Cincinnati, finished college at UC, and pulled my life back together.

And formed the Customs. The Cincinnati music scene was centered in Clifton then, right? I lived right near Vine and McMillan, almost behind the Kroger. I didn’t have a car so I walked to school, and to our shows, which were almost all on Short Vine. We started playing every weekend. It’s how I bought food when I was in school.

That’s also how bands used to get good. We’d do four sets; it was a lot of fun. There weren’t that many local bands that played, and barely any that played their own music. I remember opening for the Ramones in late ’78 or early ’79 at Bogart’s. Dee Dee Ramone came up to me and said “What are you doing here?” 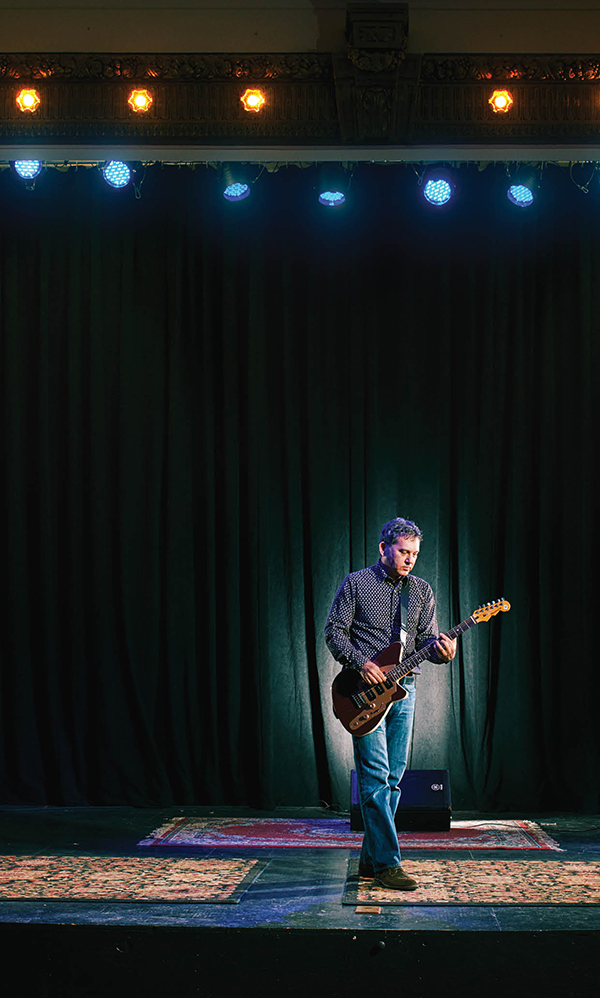 Did you have an idea of how you wanted the Customs to be different from DMZ? I was always into more rootsy stuff. I liked rockabilly, but it ended up being not quite rockabilly. I’m a big record collector so I immediately became friends with Jess Hirbe, who owned Mole’s Records and started Shake It. We did a 45 with Jess and then I kinda got sick of the band being one-dimensional, and Jim Cole and Forrest Bivens, who were later in the Auburnaires, joined. Jim played keyboards and guitar and he wrote “Long Gone,” the last single. Then I moved back to Boston.

Which is where you reconnected with Monoman in the Lyres. I graduated from UC mid-June of ’80 and got a full scholarship to the MBA program, but I decided to pass on it. I did an EP with the Lyres, the “Help You Ann” 45, and that was about it. That’s when I met Barrence.

Barrence has said you first met “over a boiling pot of chili” at your house. Chili and records. We both worked at a record store together. I didn’t really know him, but one of our friends told me he could sing, so I invited him over. He was into a lot of the same stuff and had a pretty deep knowledge of music, so we hit it off right away.

But was it Cincinnati chili? No. The chili I made for Barrence was this “Pedernales Chili” that was Lyndon Johnson’s favorite recipe. I’ve been making [it] for 30 years. You have to grind your own chiles and stuff. Back then I didn’t grind my own because you couldn’t get good chiles in Boston. I liked Cincinnati chili, but I don’t know about this cinnamon business. My favorite Cincinnati food is barbecue.

What’s your favorite? Pork ribs are really good in Cincinnati. We used to always go to Walt’s Hitching Post in the Customs days. Back then it was down off the highway in some holler on the way to the airport in Kentucky. They had a “VIP room” that you could reserve. Drink lots of whiskey and eat lots of ribs.

I interviewed Andy Jody in the spring, when your band was touring with the Sonics, and we talked about how the term “punk” could just as easily apply to Little Richard as a garage band. Was that sort of your idea behind the Savages originally? All the records I ever liked were ones that took a genre and just beat it pretty relentlessly, with a lot of intensity and vitality. the Sonics basically started out as Little Richard impersonators. The MC5 were a rock and roll band that played really hard and with a lot of intensity. I actually hated the word punk, and I hated punk music generally, but a lot of things we played were put into that package.

How much of a role did John Curley and Ultrasuede Studios play in having the new band be Cincinnati-based? Well, the Customs 45s were both recorded at QCA Studio, which is [in the same building as] Ultrasuede. [John] still has the same carpet that was there in the 1970s. I loved that studio back then, and seeing that I lived in New Mexico and most of the other guys live in Boston and Andy was in the middle, I figured Cincinnati would be the best place to record. We feel comfortable there.

What was the goal for the new record? The first two albums I did with Barrence, I wanted it to sound like a garage version of the Ike Turner Band. I wanted it to sound the “right way,” just like those records sounded. But [now], we’re less reverent and more open to just playing rock and roll. A little more in your face. You don’t want to keep repeating yourself.

There was a PopMatters review of you guys that said, “My guess is most of Barrence Whitfield’s original fans think they’re too old to go out and hear such wild tunes.” We still have a lot of fun doing it. It’s a workout going on tour. We’re probably doing [murmurs as he does mental math]…55 shows in the next three months. But everybody’s in good shape right now. You only live once, so you better do it while you can.

Do you think that Cincinnati’s kind of overlooked as a music town? Historically, it’s been overshadowed by Detroit and Memphis. Cincinnati is a great music town. I love King Records. I love Fraternity. I’m in my record room right now, and there’s a huge box of King stuff. A lot of good bands have come out of Cincinnati: The Long Gones. Thee Shams. The Greenhornes. But it does get sloppy seconds for some reason. Detroit seems to get more attention. King Records is getting some of its due, but it doesn’t get enough of it.

So how big’s that record room? Pretty big. I’ve probably got two or three hundred King 45s in this one box. I just got one yesterday by Mac O’Dell called “Penicillin.” He’s singing about the discovery of penicillin, and how it’s so great. You would’ve thought that it was about, y’know, getting VD and needing penicillin, but it’s more like if the Delmore Brothers did it—a straightforward ode. I got that in a big pile of records in some warehouse in Albuquerque.