In his ninth season as Reds bullpen catcher, Mike Stefanski tells us  there’s much more to the position than warming up the closer.

Bullpen catchers make more throws than anybody. I’ve counted how many times I throw a baseball in a day, and it’s close to 500 or 600 times. A lot of guys give their new gloves to me to break in because of how much I catch. I can break in a glove in a week, whereas for a normal player it might take a month or two.

As a bullpen catcher, you’re not quite a coach and you’re not a player. You’re kinda stuck in the middle.

New baseballs come in cases, and they’re pure white. Before a game, they have to be rubbed in mud because they’re really slick.

One thing that’s huge is a ball budget. You’re allotted so many balls for the entire season. You start taking it personally when guys give baseballs away at batting practice because you’re running out. The last year I managed the balls—and probably why I don’t anymore—they had to order a whole new skid, which I’m sure they weren’t happy about.

You get a lot of hecklers—especially in San Francisco and Philadelphia. You can’t be too sensitive.

You don’t want to be too intense when you play baseball.

We play 162 games and 81 of them are on the road, so we’re away from family half the time, and we don’t have many days off. It’s a tough lifestyle.

If I had a $5 bill for every time somebody said, “Man, I wish I had your job,” I’d be rich. I’d really love to offer them one week of doing everything I’ve got to do and then have them make that decision.

Before the Bullpen
Stefanski played baseball at the University of Detroit, then went on to win a batting title and a championship in AA during his 12 years in the minor leagues. “There’s not a lot of glamour,” he says about the minors, “not a lot of money.”

Catching Guru
Stefanski says Cardinals minor league coach and former catcher Dave Ricketts “was instrumental in getting me to believe in myself and setting me up to be involved in the game for a long time by teaching me so much about catching.”

Full Schedule
For a 7:10 game, Stefanski arrives on field at 1 p.m. With workouts and meetings, his only downtime is between 5:45 and 6:30. “I’ll take a shower, get dressed, eat, try to relax,” he says. “Once the game starts, you’re pretty much locked in.”

Like Father
Stefanski’s son plays basketball and, of course, baseball. “One of the coolest things is watching your kids compete,” he says, “especially when you’ve been competing your whole life.”

Originally published in the September 2012 issue.
Photograph by Jonathan Willis. 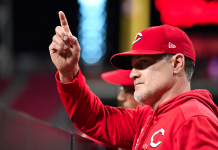 Hope Can’t Be the Reds’ Only Strategy This Offseason 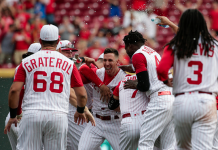 Wait ’Til Next Year, Reds! 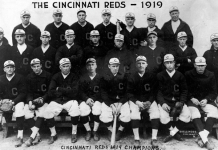 The Reds Won the 1919 World Series Fair and Square