Home Culture Blast From the Past 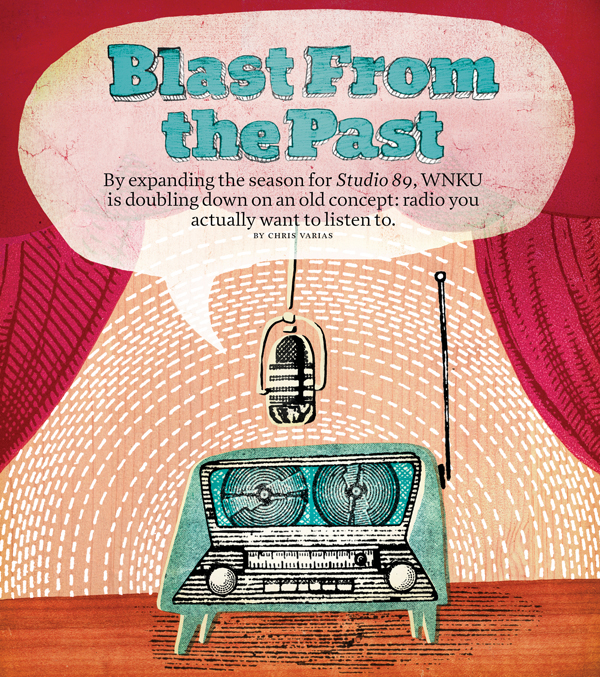 Glen Penquite is the best kind of Studio 89 regular, the kind who feeds the band and crew for free. Accompanied by his wife, as well as an assortment of veggie, fruit, sandwich, and dessert trays, Penquite makes the 75-mile drive, one way, from his catering business in Bellbrook, Ohio, to the campus of Northern Kentucky University, the home of WNKU-FM and Studio 89, with stunning regularity. Over its 10-year history Studio 89 has featured a healthy roster of local favorites (Daniel Martin Moore, Kim Taylor) along with national acts (Los Lonely Boys, James McMurtry, the Rev. Peyton’s Big Damn Band). And they do the show the old-fashioned way: performed in front of a studio audience and broadcast live on Monday evenings. It doesn’t cost anything for WNKU members to attend a broadcast, but Penquite enjoys it so much he felt like giving back in some way—and the free grub is a hit with the artists and a production staff of unpaid college students. “It’s like date night for me and my wife,” he says. “It’s a blast.”

Not all listeners exhibit that level of devotion to WNKU, to be sure. But Greg and Colleen Penquite could be seen as leading indicators in the public radio station’s slow but steady march toward easing its financial burdens by broadening and energizing its listenership. WNKU spins a format called Triple-A (Adult Album Alternative), which means a playlist with more diversity than your average rock station. On a recent afternoon the variety of music wafting out of the Highland Heights studios ranged from indie-rock favorites Calexico and Ben Gibbard to classic rock mainstays Eric Clapton and Talking Heads to Teddy Thompson, Justin Townes Earle, and Ben Taylor, three rootsy singer-songwriters carrying on the work of their respective fathers (Richard, Steve, and James).

“How many times can you hear ‘(I Can’t Get No) Satisfaction’ or ‘Stairway to Heaven’?” asks Penquite, who at 56 is the kind of Baby Boom listener that classic rock stations are desperately trying to hold on to. “The new artists, the Americana artists—it’s so refreshing.”

In 2012, the radio station doubled the number of Studio 89 shows, going from one 13-week series a year to two, in spring and fall. (The initial 2013 series opens February 18 and runs through May.) WNKU music director John Patrick McGue says the show is an easy sell to lesser-known musicians, thanks in part to the Clear Channel-ization of the radio landscape. “It’s all corporate,” says McGue, who goes by John Patrick during his afternoon on-air slot. “You’ve got one program director for the whole country. [If you’re a nationally known act] you’re on every station. But to get on if you’re a band in Cincinnati? It’s probably not gonna happen. Most bands will do anything to get their music out there.”

It helps, too, that the station is now broadcasting the show in a modern new space. The 80- to 100-seat Digitorium in NKU’s Griffin Hall is filled with roughly $1 million in tech equipment, including TV cameras and a 25-foot-by-15-foot MicroTile LED wall that serves as a backdrop for the performers. Students do all of the directing, filming, and editing, and turn it into an hour-long show for Kentucky’s public television network KET. It’s no coincidence that the format is similar to the longtime PBS live-music show Austin City Limits; Chris Strobel, an associate professor of electronic media and broadcasting, uses it as a measuring stick for Studio 89. “The quality is there,” he says. “When we started [on KET], we were the lead-in to Austin City Limits. My goal is the same with CET, to be of the same quality.”

“It’s part of everybody’s hope that the show will become something that we can syndicate,” says Aaron Sharpe, WNKU’s director of development and marketing. “As far as the size and the scope, it’s probably not going to be in a venue the size of Austin City Limits. And who knows how long that would take. But there’s no reason why it can’t expand regionally on public television. I think there’s potential for it both in terms of a television audience and growing it to make it available as a radio show for other stations as well.”

If there’s one thing WNKU knows how to do, it’s grow. For years, Sharpe says, listeners complained that they couldn’t pick up the station downtown or in the northern suburbs. So, to complement its 12,500-watt, directional-to-the-south signal, WNKU purchased 105.9-FM in Middletown and 104.1-FM in Portsmouth, Ohio, in a package deal and went live with a simulcast broadcast on February 1, 2011. It gives WNKU the largest combined footprint in the local FM market, reaching well north of Dayton and east of Huntington, West Virginia.

Penquite was a listener and advertiser on the former Middletown station, which had a country format. He had never heard of—let alone heard—WNKU until the switch, and was surprised to discover a terrestrial station playing an artist he had previously only heard on satellite radio. “One day I just happened to stop at 105.9, and I was thinking, Wow, it sounds like an artist that I know. It was Paul Thorn,” he recalls. “All of a sudden I’m hearing this on an FM channel. The music just kept rolling and rolling.” Now Penquite is a diehard, and has turned several friends on to the station.

That’s music to Sharpe’s ears. The goal of expanding the footprint was to increase listenership, and in turn, listener donations. While NKU owns the radio station, Sharpe wants to reduce its dependency on the university as a means of survival.

“The university has made no threats to sell us or to get rid of us,” Sharpe says. “But when you look around and see what has happened here and across the country, universities that own licenses for public radio stations, when they deal with budget issues, they look at the bottom line and ask, ‘Where can we cut?’ Oftentimes it’s their public broadcasting license. The university has taken care of us to the tune of around $300,000 a year and then some since they’ve had us. It’s just a way of us standing on our own two feet.”

Only time, and listeners, will tell if this strategy ultimately works.

Local troubadour Daniel Martin Moore (a 2004 NKU grad with a degree in photography) has made multiple appearances on Studio 89. “I always jump at the chance,” he says. “They have been so supportive of me over the last several years.” Moore’s latest album is Farthest Field, a collaboration with Louisville singer-songwriter Joan Shelley.

Tune In, Turn On

In the 1990s, Studio 89 was known as Exit 89. It went on hiatus and returned with its new name in 2003. The show can be seen on KET three times a week, as well as on NKU’s campus station, Norse Media.

Can You Hear Us Now?

Before adding the two FM signals in 2011, WNKU tried to put a band-aid on its northern coverage issues by simulcasting on 94.5 from a small West Chester translator that only had a five-mile radius.

The University of Cincinnati used to own WGUC, and Xavier University used to
own WVXU. Cincinnati Public Radio, Inc., now owns both and operates WMUB, which is still owned by Miami University.

This article contains a revision not found in the print edition. After the issue went to press, the start date for Studio 89’s upcoming season was pushed back from February 4 to February 18.

Originally published in the February 2013 issue.
Illustration by Grady McFerrin