Home Culture Arts Behind the Scenes at Playhouse in the Park

The scenery for A Christmas Carol at Cincinnati Playhouse in the Park has its own repair manual.

The staff call it “the bible”—a thick compendium of details about the set for the annual production. The paint specs for Scrooge’s front door, the size of chains on Jacob Marley’s ghost…it’s all recorded in case something needs to be touched up, fixed, or even replaced for the following year. Most scenery at the playhouse isn’t intended to last like the 25-year-old holiday show. But the same attention to detail is built into everything that comes out of the scene shop on Gilbert Avenue in Walnut Hills.

The 30,000-square-foot building used to be a roller rink. Now the vast span is subdivided into areas for design, construction, painting, and storage. During a visit early in the fall, the staff was juggling seven productions—some in performance on stage or on tour; some under construction; some still on the drafting table or emerging from the mind of a designer. Technical director Troy Brizius gave us a peek at the intricate drawings for Summerland, a play about a 19th-century “spirit photographer” who claimed to be able to capture images of the dead. (In her tormented widowhood, Mary Todd Lincoln was a fan.) It’s slated for the Shelterhouse in February, and production designer Paul Shortt’s exacting hand-drafted plans had already been finalized. Though apparently some designers’ work is a bit more fluid: Brizius says he once received a photo of a set piece sketched on a napkin. “A photo,” he reiterated. “I didn’t even get the napkin.”

To make it all come alive, the shop uses a combination of artistry, elbow grease, and scavengery. Take the recent production of August Wilson’s Jitney. It’s the story of an African-American gypsy cab company in Pittsburgh’s Hill District. The stage floor was covered with new commercial tile that the crew had to beat up to make it look beat-up, and the brick walls of the surrounding buildings were fabricated from vacuum-formed plastic, then carefully painted to look weathered. But the cabbies’ well-worn steel tanker desk was the real deal: a lucky find from the 1950s.

The Golden Rule of scenery and props is to serve the play, not distract from it. So occasionally the drive to make magic has to be reined in. Brizius recalls a scene in God of Carnage in which a character vomits on stage. The crew figured out how to rig a tube up the actress’s sleeve so she could cover her mouth and fake-upchuck into her hand. But then they went round and round about the imitation puke. Should it be thick or thin? Light or dark? Should there be chunks? “We finally decided we were overthinking it,” he says. They used colored water and let the actress’s retching sell it to the audience.

And that’s Brizius’s other scenic Golden Rule. “We try to keep the drama on the stage.”

How do you furnish that perfectly constructed set to keep it convincing? Welcome to the prop shop.

[Mouse over the icons to see details about the prop shop] 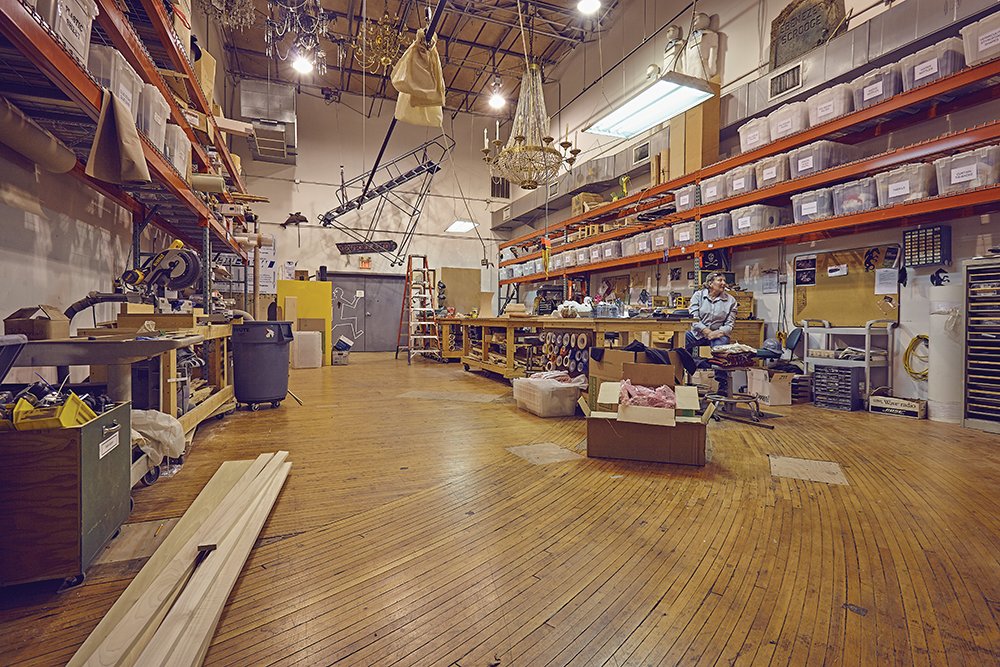 Ingrid Heithaus’s specialty is making soft props, such as upholstered furniture. She and her colleagues are often called on to create cost-effective versions of expensive items—imitations good enough to hold up to close scrutiny even in the intimate Shelterhouse theater. But “faking it” is not always cheap. The set of leather luggage behind her was hand-crafted for a 90-second scene in Pride and Prejudice. The grand baggage was pricey and time-consuming, but the director made it a priority.

Tools of the trade are for large-scale artistry as well as subtle finishing touches. Scenery is painted in the shop, but once it’s installed the crew adds details as tiny as smudges around a light switch. On stage, even simple carpentry requires ingenuity: Stairs can’t creak and hinges can’t squeak unless a script calls for it—and then, on cue.

With limited storage space, the playhouse can’t retain every prop from every production. Modern items are usually sold when a play is over (employees get first dibs). Most of the “keepers” are vintage pieces and elaborate fabricated items, such as the custom-made sarcophagus originally created for The Mystery of Irma Vep. These are things that might be used in another production, or could be rented by other theaters. Increasingly, furnishings that once were ordinary are becoming hard to find. Which is why it’s important for the theater to have a good supply of mundane 20th-century equipment—telephones, tube televisions, typewriters—on hand.