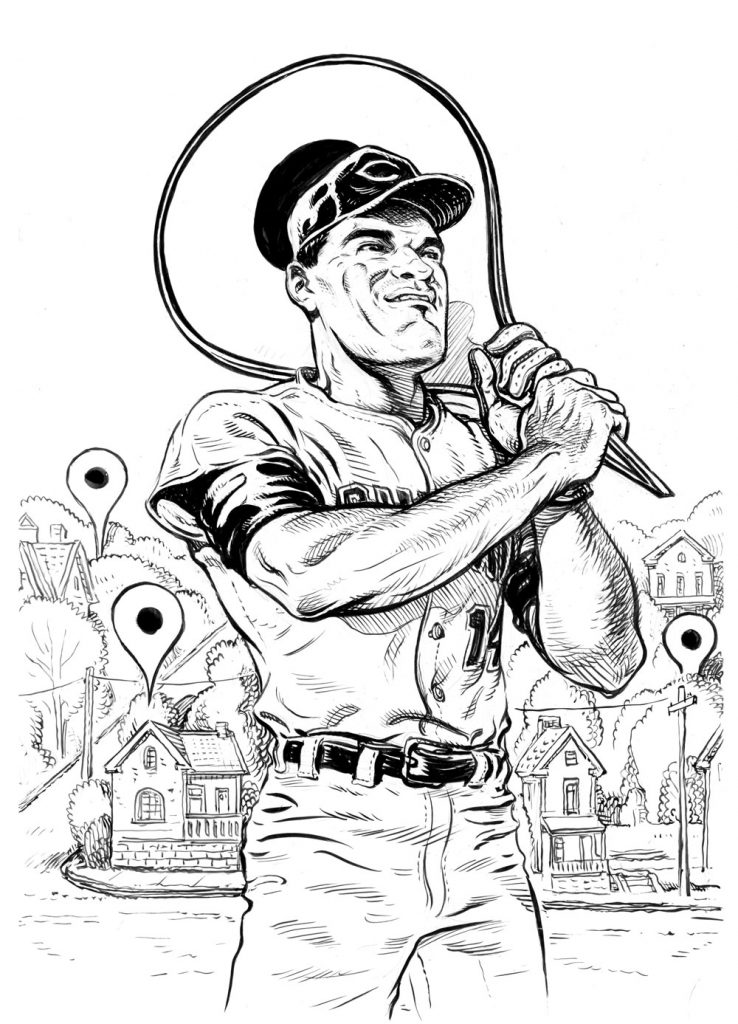 Pete Rose is banned from baseball, but why is he banned from Google Maps? When I try to use the Street View to see his boyhood house on Braddock Street near Anderson Ferry, I can’t. The entire block of homes can’t be “cruised” like every other street can. Did Pete gamble on maps or something? —OPENING DAY BUMMER

Dear Bummer:
You may have stumbled upon the next big conspiracy theory. Might Braddock Street be one of those top-secret locations that Google Maps renders inaccessible for national security reasons? Have you discovered Cincinnati’s “Area 4192?”

Using Google Maps’s overhead view, we see four properties along Braddock Street, a tiny offshoot from Cathcart, off of River Road. But you are correct: When we use Street View to turn from Cathcart onto Braddock, nothing happens. Apparently, that creepy Google Maps car has never skulked along this short block. Four homes are being snubbed. Pete grew up at 4404, and as a Cincinnati Red, perhaps he had originally hoped to retire when he reached that exact number of hits.

The Doctor has sent an impassioned message to the Google gods, and will report on any response. Reds fans have no desire to bother the current residents of Pete’s boyhood home, but we should be able to at least trespass digitally, as we can with Doris Day, Andy Williams, and other local luminaries our grandchildren have never heard of.

You recently wrote about Cincinnati proposing a bad law in the 1920s to reduce car accidents. That reminded me: My grandfather once said that, when he was a kid, a black flag was raised on Fountain Square every day after a fatal accident, and that deaths actually went down. Is this true? —FATAL FLAGGER

Dear Fatal:
Readers are referred to the Doctor’s column from November 2018, describing Cincinnati’s famously stupid attempt at traffic safety in 1923. Your grandfather recalled a later effort that was—refreshingly—devoid of stupidity. And it worked. Starting in February 1939, a white flag with the city’s insignia was raised on Fountain Square each morning, but if someone had died in a traffic accident the previous day, a black flag went up instead.

The campaign did not start off well. A grand ceremony attended the first raising of the white flag, and a traffic death occurred 10 minutes later. Oops. But as the flurry of whites and blacks were raised each day, each month showed fewer road fatalities compared to the previous year. Huzzah. Wasn’t the fact that Cincinnati occasionally looked like the world’s largest pirate ship a small price to pay?

The year ended with an impressive 29.4 percent reduction in traffic fatalities. But the campaign also ended, with the car carnage returning to its sad habit of increasing. Maybe the crowds at the Reds’ seventh-game World Series victory in 1940 were partially to blame.

Our movie theaters show trailers with demonstrably ear-damaging volume levels. Doesn’t Cincinnati have a law that’s supposed to protect us from unsafe conditions in public places? The volume levels can be measured, and the law should be enforced. Who is supposed to be doing it? —LOUD AND UNPROUD

Dear Unproud:
Readers are strongly advised to stay off of this person’s lawn. Cincinnati does have laws that ban annoyingly loud sounds, but they all address music or noise—some may find those terms redundant—that disturbs others nearby. Nothing addresses noise sealed inside a venue filled with customers who have paid for the privilege.

The Doctor contacted some local theater proprietors, all of whom conveniently blamed Hollywood. Trailers are indeed created at higher volume levels, hoping that this will demand your attention as you wait for the “based-on-a-true-story-but-laughably-distorted-in-significant-ways” feature to begin. Trailers are also, by definition, more densely crammed with explosions and deep musical thuds. Today’s digital projection booths no longer have the stereotypical sweaty guy who can change the volume level between reels. There are no reels, and there is no guy. The volume is set to make the feature sound comfortable; viewers are at the mercy of everything else.

Newer technology, we are told, will soon allow programmed adjustments for the theaters that want to make them. And for just 25 cents, you can have the larger-sized adjustment!