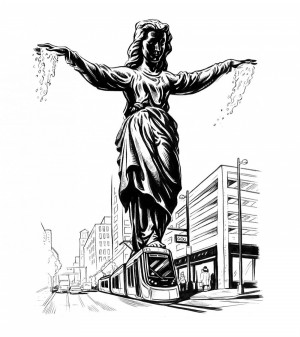 This year, 2016, marks the 10th anniversary of the Tyler Davidson Fountain’s renovated return to the Square. I’ve always loved that statue, and even went to the ceremonies after changes in 1970 and 1985. Were there ever any other plans for moving it that ultimately didn’t happen? —FOUNTAIN FAN

Dear Fan:
Cincinnatians have not always shared your affection for our fountain. There have been several failed attempts to uproot and evict it. The first was in 1899, when merchants along the Fifth Street esplanade blamed the statue for traffic congestion and decreased revenue—the classic “nobody goes there because it’s too crowded.” Hauling the fountain to Garfield Place even had the support of Henry Probasco, the moneybags who originally built it.

Your fountain-loving ancestors prevented that move, but more battles lay ahead. In 1910, as our beardless, big-handed statue of Abraham Lincoln was being designed, proposals were made to hustle the fountain off to Eden Park and replace it with Abe. Fortunately, nothing came of that; just think how confusing the opening of WKRP In Cincinnati would have been.

In 1913, the merchants failed again, this time proposing the fountain should grace the entrance of the new Hamilton County Courthouse. A final attempt by FOOFALAINOFS (Friends Of Our Fountain As Long As It’s Not On Fountain Square) came in 1930, continuing the trend of trying to dump the fountain at the city’s newest landmark—this time at Union Terminal. Be alert: The next proposal may call for duplicating the fountain and putting one on top of every streetcar.

I regularly drive past Walnut Hills High School at night, sometimes quite late. Why are the lights on over the athletic fields? I doubt their teams are playing or practicing that late. Gotta be expensive. Is this ordinary security, or did something happen there one night that made it a policy? —EVERY NIGHT LIGHTS

Dear Every:
Yes, something did happen. It was a brief but very scary incident on campus during the school’s recent renovations and additions, something that was kept out of the media. But a crack investigation by the Doctor (“The D-Team!”) has uncovered the details.

Principal Jeff Brokamp says that the crisis was averted by the decision to provide outside groups the same lighting on the fields as student teams. Voila! This was universally lauded as a superior business model. Plus, during other events in nearby buildings, the parking lots also benefit from extra visibility coming from the field lights. The result: They’re often left on. Do not assume some teenager is treating the facility like his bedroom to spite his parents, or that the school custodian is practicing for a job at Lumenocity.

Along Linwood Avenue as it approaches the Beechmont Levee, and then on the other side where it becomes Beechmont Avenue, many of the houses don’t face the street straight-on. Each is at an angle of about 45 degrees to the road. Is there some geological reason for this?—WHAT’S THEIR ANGLE?

Dear What’s:
Those streets on both ends of the Beechmont Levee run uphill. The Doctor’s initial guess involved a geological condition that would require the angled placements of the houses you observe, perhaps to help resist landslides.

Acting on this theory, the Doctor contacted the University of Cincinnati’s Geology Department. Dr. Warren Huff said that the layers of rock under that area are flat-lying, and the glacial clay deposits that tend to cause landslides in other parts of town (Hi there, Columbia Parkway!) are well-buried along these streets, making landslides highly unlikely. His guess is that the houses are angled that way simply because the builder thought residents would enjoy a downhill view.

Cincinnati has hundreds of streets as steep or steeper than the two in question, all without any angled houses, making the entire landslide theory rather dim-witted. This Doctor thanks that Dr. for diplomatically not pointing that out.