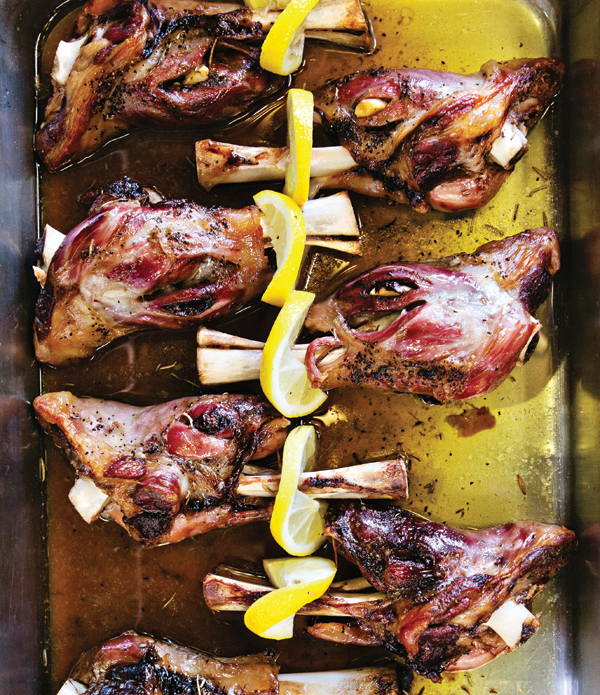 There is a color of blue so luminous that is instantly recognizable as the place where the sunlight infused sea and sky of Greece converge. For the Nika family—brothers Kris and Alex, their mitera Eleni; former owners of a restaurant in Athens—describing its unique hue is as simple as blue + blue. Or blublu. Their year-old restaurant resides in a two-story frame and shingle building awash in the iconic blue and white of their homeland, punctuating an otherwise cheerless stretch of Hamilton Avenue in Mt. Healthy with a sweep of bright color. A picket fence welcomes you, and the odors of warm fruity olive oil and slow-roasted lamb establish a sense of place that’s comforting and unpretentious. Less is more in a cuisine that’s connected to the seasons with decidedly unfussy preparations all made in-house and driven by (as claimed on the menu) ingredient availability, the mood of the chef, and plenty of love. That may mean full-bodied moussaka generous with ground beef and eggplant and crowned in a downy layer of béchamel, or a salty salad of steamed dandelion greens tossed in olive oil and lemon juice (horta). Willing accomplices that they are, lemon juice and olive oil traverse much of the tightly focused menu from stuffed grape leaves (dolmades) to potatoes both pureed (skordalia) and baked, to an excellent baked chicken. Accompanied by a side of warm, oil-glazed flatbread, the tart and rich yogurt based tzatziki, and a bottle of Retsina Kourtaki (a pale, crisp Greek wine with a characteristic note of pine resin), a hearty imagination can feel the warmth of the Mediterranean sun.

Originally published in the June 2012 issue.