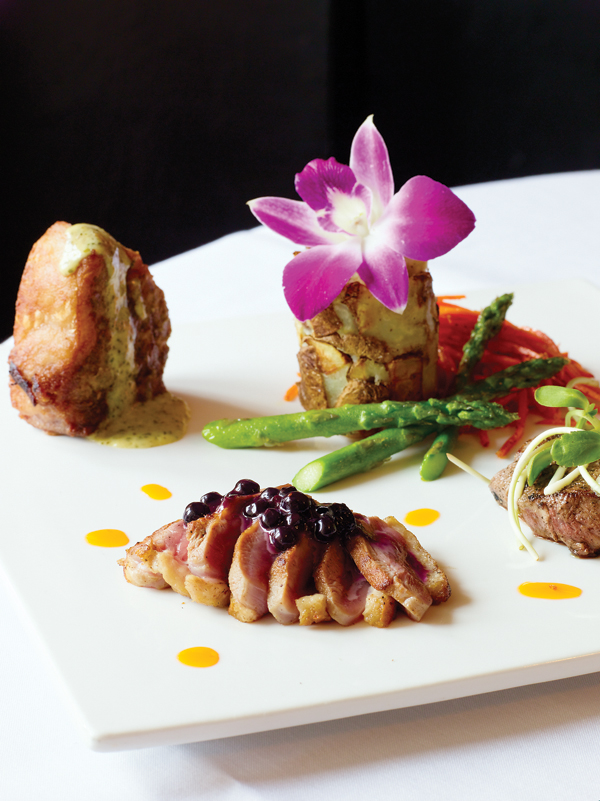 It’s impossible to talk about restaurants on Cincinnati’s west side without noting how inadequately fine dining is represented. That doesn’t mean there’s no good food or good restaurants there. Simply, west side neighborhoods have, for the most part, lacked the sort of establishments that bring together the elements of menu style, preparation, service, and atmosphere in a way that feels greater than the sum of its parts. With its expansive view from the pinnacle of Price Hill, Primavista has skillfully combined Italian classics and expert service to reign the longest, and in 2003 chef Ron Wise found success in Westwood with his upscale-but-casual Rondo’s, now the site of Vitor’s.

If you were a patron of Rondo’s, you’ll undoubtedly recognize the shabby-chic historic building that blends in with its neighbors: former homes converted to antique stores and barber shops interspersed with tax services and minimarts. You will also remember the restaurant’s side entrance, the quaint terraced patio, and jumble of small rooms. But this is where any similarity between Rondo’s and Vitor’s ends. Where Rondo’s added a little confident flair to a foundation of unpretentious sensibility, Vitor’s recipe is a fragmented combination of informal elegance, average service, and a parade of dishes sized to impress, beginning with Unforgettable French Toast…for dessert.

If restaurants are a bit of theater, Chef Vitor Abreu’s breakfast dessert is a Moulin Rouge showgirl. Two slices of Texas toast are dipped in vanilla and cocoa bean egg batter, rolled in Frosted Flakes, pan seared in butter, then topped with sliced bananas, crème brûlée pastry cream, and a frilly B-cup of whipped cream. With shaved chocolate and a drizzle of caramel sauce to finish, the resulting dessert is an unforgettably sweet, banana-cream-pie-meets-childhood-fever-dream. Three of us barely finished a shared half-order, and stared with glazed eyes as other diners consumed whole orders unassisted. The thought of eating it for breakfast made our teeth hurt.

Breakfast is a meal that Chef Vitor (he pronounces it with a short i) has grown his business on. He began a quarter-mile down the street in a tiny outpost called The Coffee Cap Café, featuring his ornate French toast with giant omelettes and burritos, eggs, and goetta, cooking it all from three hot plates, and often delivering it himself. It was a strange set up, with mammoth portions of good, inexpensive breakfast food at an excruciatingly slow pace. But when Abreu added tablecloth dinners three nights a week, the seeds for Vitor’s were planted. With only eight tables, those dinners exemplified the best and worst of a home kitchen: at times intimate and honest fare, other times overeager and overwrought. I still find much of this to be true in the new incarnation.

THE BEST RESTAURATEURS are able to seamlessly interweave their ambiance, menu items, price points, and service style. The dining room of Vitor’s is charming enough: snug, elegant, and relaxed, with flagstone flooring, Parisian red and ebony walls hung with black and white photography of iconic Paris landmarks and floor-to-ceiling sheers. There are nice touches like floating candles and fresh orchids, and yellow linen napkins folded to resemble a candle flame atop white chargers set against black or white linen tablecloths.

All in all, it feels confident and feminine without being arrogant or too affected—part neighborhood eatery, part destination restaurant—overseen by a small front staff of two or three most nights, sometimes more during a busy Sunday brunch. But it’s here that Abreu gets sidelined: These are pleasant if not ably trained guides with limited menu knowledge, making rote recommendations (“people seem to like the…”), and occasionally neglecting to provide cutlery.

Abreu’s globetrotting menu is of the throw-everything-up-and-see-what-sticks style, with about a dozen starters and salads, and about 15 entrées; plus a mixed bag of prix fixe course selections (three courses for $35, four for $43, up to seven for $67). If you equate value with quantity, you will be adequately rewarded. Most selections are of the he-man size, so much so even a couple of tattooed he-men at the next table requested to-go boxes. “You wouldn’t believe how many we go through,” the server added.

Yes, we would. The toasted bistro lasagna is a perfect example. Hearty lasagna noodles—deep fried for an extra layer of flavor and chewiness—are layered with ricotta, ground beef and pork, roasted red peppers, tomato basil reduction, and Parmesan, and heaped into a wide-mouthed bowl. It is a luxurious ooze of a dish that’s both excellent and overabundant (our 12 forkfuls made a minimal dent). It’s exceptional lasagna, and I would have gladly paid more. That’s value.

In equating value with quality, the Chef’s Mixed Grill—three proteins, chef’s choice—was a complete bust. Poorly executed, it lacked coherence, and seemed like a patchwork of cobbled-together leftovers. A lamb chop ordered medium rare was a bloody rare workout for the jaw; cubes of leathery bronzed potatoes tasted warmed up from breakfast; a curious square of salmon sat atop thick mustardy sauce; and thinly pounded pork medallions were hidden underneath a wild mushroom sherry sauce. Asian snow peas and shredded carrots completed the odd couplings. At $36, it was a waste of everyone’s money—theirs and mine.

Creating the signature dish of your childhood is no guarantee either. I expected chicken adobo, a Filipino dish from Abreu’s adopted mother, to be remarkable. The dark umber chicken was certainly pungent and garlicky from simmering in soy and vinegar. But instead of fresh and moist, it was dry, and served with a disproportionate amount of rice molded into a large cylinder, like a small pillbox hat.

AS EVIDENCED BY Abreu’s determination and by eavesdropping on a number of sympathetic patrons, both the neighboring community and the owners (Abreu and his partner and girlfriend Gina Valerius) really want this restaurant to work. So do we. Breakfast is solid, but the “fine dining” dinner portion is mid-level at best. But there’s hope.

First and foremost, pay attention to the food. Do what you do best, and get rid of the rest. Fine dining means every dish delivered to the dining room should rock, no matter how humble. We understand mistakes happen, and kitchens have off nights (that’s one of the reasons we visit restaurants multiple times for reviews). But if the “Savory Seafood Pasta” advertises “crab, shrimp, and lobster,” then serve it as such, or remove it. The few pieces of small, overcooked shrimp we paid $23 for was not only unacceptable, the tacky cream sauce wasn’t even up to par with Olive Garden.

Second, train your staff. Friendly is good, but friendly + knowledgeable + attentive = a dining experience we don’t mind paying your price points for.

Third, personally greeting your guests is a very nice gesture, but switch to clean clothes before you enter the lovely dining room you’ve put so much care and thought into. Sure, we know Mario Batali cruises Babbo in Crocs and shorts, but at least he has a clean chef’s jacket on. Abreu’s stained T-shirt and shorts nearly wounded our appetite on two different visits.

We know the west side is characterized by unassuming comfort, and west-siders by their stalwart loyalty to community. But that doesn’t mean they’ll put up with any old nonsense. Whatever side of town you live on, it’s easier to support dining that is truly fine.

Prices
Inexpensive for breakfast and lunch; moderate to expensive at dinner

Originally published in the May 2009 issue.