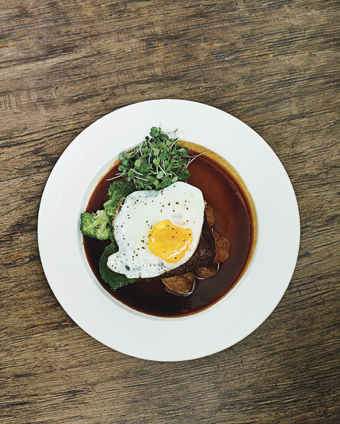 Ours is a city of beautiful views, many of them captured by restaurants. Maybe you’ve dined amid the pine paneled and glass wrapped walls of The Celestial, or danced next door in your Mad Men threads to a swingin’ set of jazz standards underneath the bar’s glittering chandelier, resplendent from the reflection of a million city lights. No doubt you’ve enjoyed the bird’s-eye view from the west side at Primavista, or the sweeping expanse of Cincinnati’s riverfront from the South Beach Grill at The Waterfront. Whether it’s low-key cool with a burger and beer at City View Tavern, or the pumped up volume of Fountain Square while noshing gnocchi and quaffing wine on the balcony of Via Vite, these rooms-with-a-view are meant to set the stage for a memorable dining experience. With a great view to frame the food, an excellent meal can be elevated to an extraordinary one, and inspire our capacity to forgive a mediocre one.
Enter View, the newest restaurant to occupy the fifth floor of The Edgecliff Private Residences. Adjacent to picturesque Eden Park, View captures a wedge of park woodland, Ohio River, and Bellevue riverfront best from the outdoor terrace furnished with marginally comfortable (nothing a folded matchbook under a table leg and a seat cushion wouldn’t cure) black mesh steel tables and chairs, a few pots of mixed flower plantings, and on one evening, a magnificent Indian summer sunset of peaches and plums. From indoors, about two-thirds of the 50 or so seats in the main dining room (there is a side room used for private parties) enjoy nearly the same vista by way of two short walls of windows that are occasionally open to the fresh air when the weather is fine.
The main dining room is modest but comfortable, low-ceilinged with recessed lighting and an uncluttered palette comprised of muted wines and grays. It’s an unpretentious dining room—lacquered wood tables, straight back chairs, a double-sided upholstered banquette dividing the room—meant to appeal to families, to residents of the building, to girlfriends, to the pre-theater crowd, or to a couple of lovebirds lit by wine and the warmth of the small gas fireplace in the center of the room. But it’s an interior you’ll have a difficult time describing should you be pressed to recall it, because its restraint intentionally takes a back seat to the outdoor panorama.
There have been other restaurants, pre-View, that have tried to cash in on the scenery and the built-in clientele, most recently a resurrection in-name-only of the building’s original formal restaurant, The Edgecliff Room. It was Martin and Marilyn Wade’s first solo attempt as restaurateurs following their very public separation from partner Jean-Robert de Cavel. Unfortunately, calling it mediocre overstates the quality of food and service, a recipe even a room with a view couldn’t save; after a couple of dinners, I declined to review it. It closed within a year. Prior to the Wade’s establishment, The Coach and Four fared a little better over a four-year run with good but uninspired cuisine.
Now Harry and Gay Stephens—owners of Bella Luna, the seven-year-old casual Italian café on Eastern Avenue—are the latest restaurateurs hoping to make this hidden spot (obscured from the street view and entered via the side entrance off the parking lot rather than through The Edgecliff’s main lobby) both a neighborhood gathering place for the surrounding community of luxury high-rises as well as a temptation for destination diners. And View has the potential to do so, but there’s still some room for improvement.
In that department, I’d begin with the menu. The Stephenses describe their menu as “an inspired twist on American cuisine,” a rather large banner that at best allows Executive Chef Alfio Gulisano and Chef de Cuisine Sean Curran to exercise some creative chops, and at worst, allows the menu to be unfocused and overstated. Sidestepping Italian specialties (“We don’t want this to be Bella Luna II,” says Gay), the term American encompasses everything—and that is no exaggeration. The spectrum of dishes runs from Kauai Moa (grilled chicken in a bourbon pineapple marinade atop coconut rice) to a codfish beignet (a battered and fried cod croquette stuffed with jalapeño and bacon and drizzled with berry sauce) to “real meat and potatoes” (filet mignon, scalloped potatoes, and crisp tender green beans), to chicken Tex-Mex style with a blanket of tomatillo sauce and chile cheese grits.

Curran cites America’s “melting pot” during a phone conversation when asked about the menu. “A lot of dishes can be called ‘American,’” he says. He goes on to define “inspired twist,” using his meatloaf as an example. Not a big fan of the standard beef variety—“I hate it,” he says—Curran uses ground lamb, binds it with bread crumbs, flavors it with mirepoix (onions, carrots, and celery), tomatoes, and mint, and crowns it with berry barbecue sauce “instead of the ketchup on top.” Served alongside a wonderful parsnip puree, the loaf is moist and delicate; a good loaf, but it falls short of rocking your palate with assertive flavor.

At the risk of being overly critical, I wonder when something becomes an inspired twist. This implies innovation, or something veering from the norm. At one time, ancho chile or a savory herb like basil flavoring ice cream would have been considered a twist. No longer. Lamb meatloaf isn’t new, and there are thousands of available lamb meatloaf recipes at your fingertips, many that include mint and/or fruity barbecue sauce. When I asked Gay Stephens what the “inspired twist” part of the menu meant, she referenced View’s steak and eggs entrée, telling me, “Instead of eggs on the side, we put the egg on top of the steak.”

View’s incredibly tender flat iron cut wears a well seasoned outer char; it melds beautifully with its headdress of perfect sunny-side-up egg, drizzle of roasted garlic demi, and side of fried potato wedges. But an egg served on top of a cut of beef is done in many cuisines—particularly Latin—as well as many restaurants across the U.S. So if American cuisine has become redefined through our growing “melting pot” and shrinking borders, is anything a twist anymore? Where is the inspired twist in View’s savory crab cakes with mango chutney, or the endive salad with goat cheese, candied walnuts, and dried cherries—a salad featured on thousands of menus?

Twists aside, sometimes View lands firmly in inspired territory. The traditional role of macaroni and cheese on a menu is usually that of wingman to steak, to barbecue, to Southern-fried anything. It may have been Chef Thomas Keller who jump-started the trend for using the heartland comfort dish as a delivery system for exotic ingredients—at his Napa Valley mecca, The French Laundry, the outlaws are butter poached lobster and mascarpone—forcing fans to take sides: those who uphold the convention of yellow cheddar (or Velveeta, or both) and elbow shaped pasta as well as the more liberal palates, open to many interpretations. View follows the ultimate mac-and-cheese challenge with a diet-be-damned killer version employing white cheddar, smoked Gouda, crabmeat, and truffle oil. The aromatic truffle oil hits you first, but it’s the big flavor and luxurious texture—creamy without being oily or heavy—that makes it one of my new favorites in the local macworld.

While not all of Gulisano’s and Curran’s dishes are this memorable, most are very good, others excellent. But a few are downright forgettable. I hope the limp empanadas, bland ceviche, or country fried turkey breast completely hidden under a cloak of chorizo sausage gravy featured on a special menu during September’s Restaurant Week did not dissuade any first-time diners from returning.

Table service is friendly and relaxed, if occasionally a tad slow and uninformed; we encountered more than one server who mispronounced menu items and wines or answered questions about a dish with variations on the theme: I’ve-never-had-it-but-customers-seem-to-like-it. This is not necessarily the fault of the servers but of management, who should ensure that the staff knows what they are selling. Example: We asked our server to tell us about the ceviche (pronounced seh-VEE-chay), of which there are countless styles depending on the country of origin—Caribbean, Spanish, South American, etc. “Kuh veesh”—we can’t say for certain, but our server seemed to be correcting us—”is shrimp with lemon juice. I haven’t tasted it, but it looks good.” Had we not heard that Gulisano was from Argentina and figured a South American knew a thing or two about ceviche, it would have been no go. We ordered it anyway. Turns out Gulisano did not prepare it or oversee it (he is on site at Bella Luna), and regrettably, the pile of tiny baby shrimp was lackluster.

I really like View’s bar. It’s not a fancy bar; not a see-and-be-seen bar. In keeping with the casual sophistication of the design, it’s small, somewhat dark except for back lighting, and Rat Pack cool—a good place for a clandestine rendezvous and a hefty double-fisted Manhattan from a quick and capable bartender, the game du jour on the flat-screen, with the sort of food that invites a second drink: a small crock of warm Gorgonzola dip lightened with cream cheese and studded with smoky crisp bacon; a decent, if smallish, well-seasoned burger; or a plate of onion rings with a woodsy flavored crunch of porcini mushroom tempura batter.

And in my view, it’s not a twist—or even a vista—that’s inspiring, but consistently good, simple food and sharp service. If View embraces this aesthetic, then both restaurateurs and diners should be enjoying the scenery for years to come.

Originally published in the November 2010 issue.