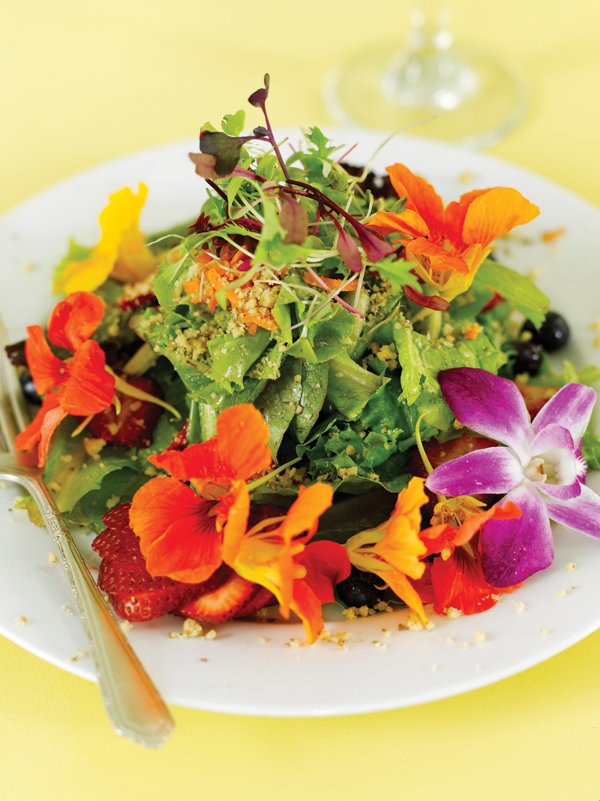 Todd Hudson, the chef and owner of The Wildflower Café stares at me just long enough to consider whether I’m as much of a simpleton as I sound. I’ve stopped him on his way through the dining room to ask why he chose to build an entire menu around organic and local food. “Because it’s the right thing to do,” he says. He continues out the back door, and returns moments later with a handful of black raspberries. Another five minutes and the berries are set in front of me, tossed into a salad of delicate mixed field greens and shredded carrots barely dressed in raspberry champagne vinaigrette. Ripened and warmed by the sun, the berries release their purple juice with each probe of fork-into-greens, capturing more than a bite—an exquisite moment, a childlike experience of discovering something you have no frame of reference for. Hudson peeks back into the dining room. “Aren’t those awesome?” He gestures toward the salad plate, responding to my enthusiastic mouth-full nod and smile with, “Yeah. Nothing better.”

I take his comment in the spirit that he implies: the macro view that nothing is better than just-picked, -harvested, or -caught food, which has lately galvanized chefs and food lovers, and over the past five years energized an entire onward-into-the-past dining movement. It’s a movement that Hudson both dismisses (he thinks menus crowded with pedigrees are a perversion) and embraces, claiming he didn’t open his restaurant to make money, but to serve a purpose. “I want to show people that it’s possible to run a restaurant and source about 90 percent of the food locally.” Local can mean different things to different people. Hudson tries to keep it primarily regional, with an emphasis on Ohio products and family farms with sustainable practices. But even outside that, any fish served were caught in the wild, there’s not a GMO in sight, and the coffee beans are locally roasted. He shuns processed food and factory farms, and thinks you should too. His focused purchasing (in frequent small quantities) may mean occasionally running out of product, but so far he’s been able to achieve his goals—and then some. The restaurant is filled nightly, and his low overhead has him grossing more in his start-up year than he ever imagined.

IT SHOULDN’T BE, but The Wildflower Café is a bit of surprise. Located in the older section of downtown Mason in a century-old house that occupies a wide corner lot at East Main Street and Kings Mills Road, the year-old restaurant is emblematic of a community where past and future have collided. An agrarian center less than three decades ago—where farm-to-table eating was a way of life—Mason is now largely an exurban glut of franchises that offer convenience, speed, and predictability. Given its agricultural heritage, it’s a natural setting for a locavore-style restaurant, yet the idea seems contradictory to the area’s current identity. Beyond drawing destination diners, will residents of the surrounding community support a restaurant where a stand against industrialized farming drives the menu? The 26-year-old self-taught Hudson seems to think so. “Our food is good, and I’m confident that if you serve good food at a reasonable price, people will come,” he says. Perhaps oversimplistic and obvious, but true: No matter how proudly you wave the ethical dining flag, no one will eat there more than once on a set of principles alone.

And it is good. Not spectacular, visually bracing, or madly intoxicating, but well-presented, uncomplicated food that’s modest and nourishing. Sausages, for example. They aren’t an uncommon find on area menus accompanied Spanish-style with peppers and onions, or like the good Germans we are, with sauerkraut and potatoes. But I’m not aware of any local menu that serves a sampler of hand-crafted sausages (a venison version made with merlot and blueberries, chicken with spinach and feta, and a hot New York–style pork sausage heavy on the fennel and spices) adorned with nothing but grill marks and accompanied by sliced pretzel bread and house-made mustard. Nearly as straightforward and just as sensible are three small scoops of wet salads—potato, curried chicken, and hummus—served with greens, raspberries, strawberries, apple slices, and crackers.

There are also sandwiches: salmon on ciabatta with smoked bacon; burgers on pretzel buns with caramelized onions and bacon; a chicken club on croissant; a shrimp po-boy on rosemary foccacia. There’s an eclectic collection of entrées from quiche to filet mignon, pasta primavera to jerk chicken. And though not every dish will captivate you—my pasta primavera was so jacked up with greens and herbs, it collapsed into one muddled flavor of wet field—the attention and care for handmade is apparent. Salad dressings are of the minimal ingredients variety; a stratum of herb mayonnaise is layered on many of the sandwiches; the spicy mustard is fortified with Guinness. The menu is also peppered with the language of green dining: “sustainable,” “organic,” “natural,” “grass-fed,” “local,” “chemical-free,” and “seasonal” are omnipresent and as big as the Farm Aid heart Hudson wears on his sleeve.

True to its personality, even The Wildflower’s indulgent desserts were acquired organically. Before she began creating desserts for the café, Stephanie Eidam was a regular customer who showed Hudson some birthday love with home baked cookies. (“They were out of this world,” he recalls.) Soon she was providing daily desserts like a buttery layer cake infused with strawberry puree and iced with a not-too-sweet buttercream, its purity of flavor and elegance derived from the simplicity and quality of the ingredients (Eidam uses organic butter and flours, and farm fresh eggs). “She’s 28, and bakes like she’s 80,” Hudson says with clear admiration.

But even before you encounter the bundt cakes and pies, the blackboard menu and local wines like Burnet Ridge, the laid-back charm is considerable. You’ll probably enter through the back door, passing several customers sitting outdoors on the sort of molded plastic furniture you’d find at Home Depot. The interior is painted a tenaciously cheerful yellow and celery green; the dining rooms outfitted in tables and chairs that seem to have been collected from a number of yard sales. The two small dining rooms (together they seat 36) are separated by the 100-plus square foot kitchen, which you may or may not have to pass through. Even if you don’t, you’ll be privy to Hudson working the stove, his wife Jenna assisting and serving, two employees doing some of the same and—on a really jamming night—maybe even the young couple’s mothers helping out. The fierce commitment to green living even translates to the air-conditioning being abandoned and doors and windows thrown open on all but the muggiest of summer nights, and the folksy ambience extends to customers being encouraged to pick a peach from the tree or a tomato from the garden. With Eric Clapton, Neil Young, and Dave Matthews providing the soundtrack, the whole experience is so…peace, love, and Bonnaroo.

Ten years ago, when he was 15, Hudson wrote a paper outlining his future. It included marrying his middle school sweetheart (that honor belongs to Jenna), owning a Volkswagen Beetle (did that too), and having his own farm fresh restaurant. “I never thought about doing anything else,” he says. “It’s not a trend.It’s the past, and the future.”

If restaurants reflect the attitudes, issues, and trends of society, then promoting the pleasure of food with a commitment to community and environment is the future for us all.

Atmosphere
Two floors and a backyard of folksy, farm fresh dining serenaded by the likes of Dave Matthews and Neil Young (via the chef’s iPod Shuffle).

Originally published in the August 2009 issue.