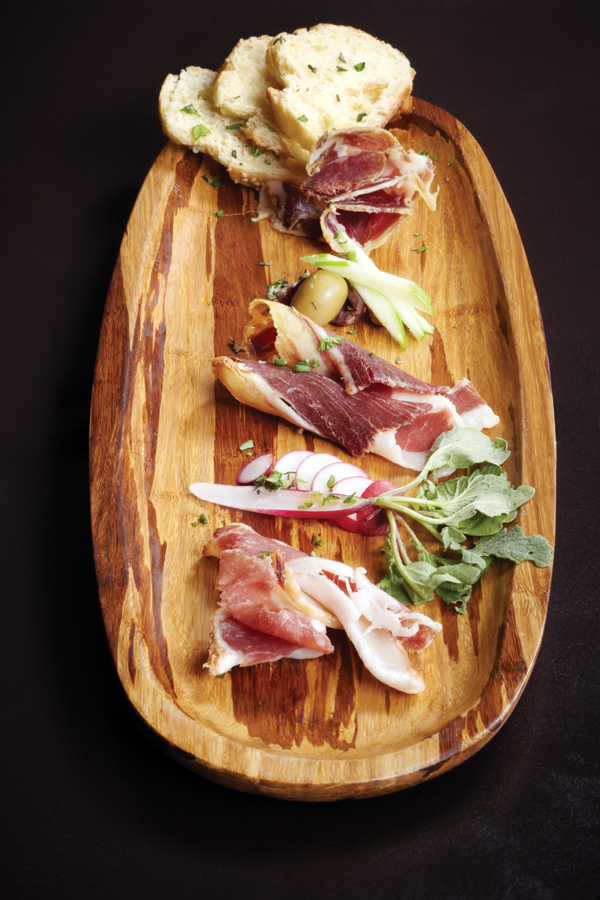 Maybe it’s because he is delighted to have a new chef, all of seven months on the team. Maybe it’s because the menu has taken a new farm-to-table direction, a trend the new chef is noted to feverishly support. Or maybe it’s both. Because when we ask our server “What do you recommend?” he unleashes a soliloquy:

Local. Local. Local. Housemade. From scratch. Fresh. The chicken lived a cage-free life on a Kentucky farm. The vegetables are pickled in-house, the bread baked on-site. The greens are local. So are the eggs, the semolina, and polenta. The Scottish salmon is flown in daily….

We detect a slight flare of the nostrils, a faster cadence as the server moves down the menu. He’s enthusiastic about the upgrade from frozen to fresh haddock in the fish and chips, and from purchased to house-made sausage in the Scotch eggs, both dishes that have been on the menu for years. He’d like to know if we’ve ever had duck fat fries (yes), and have we ever had the chef’s duck fat fries at his former restaurant (that too). At the risk of inserting a pin in his well-meaning balloon, we must stop him. We get it. We are in Chef Mark Bodenstein’s wheelhouse.

You could make an argument that the whole earth-farm-garden-to-table craze is just that, a craze. If everything is indeed cyclical, then someday we’ll push back with super-meat born in a Petri dish (oh yes, it’s coming). The more cynical view might be that it’s a passionate philosophy that has become a mere marketing point. And perhaps that’s true in some respects; there can be a hyperbolic quality to the farm-to-table conversation. But to roll your eyes at the philosophy would be akin to saying you hate kittens. Nobody hates kittens.

For most chefs like Mark Bodenstein, sourcing local and regional food represents many things: optimal flavor, the intimate relationship between humans and nature, providing people with both good food and pride in community. Bodenstein began his culinary training at 18 years old, hopping around kitchens in South Korea, Thailand, Bulgaria, and Hawaii, where “local” was simply a way of life.

In his mid-20s he landed at Lilly’s (Louisville) in the kitchen of Kathy Cary. Her strong ties to her Kentucky roots have shaped Cary’s faithful sourcing of local products since she opened her restaurant in 1987. Bodenstein claims it was under Cary’s direction and skill that his culinary education and philosophy began to coalesce. Once back in his hometown he bussed tables for a year at JeanRo Bistro before opening NuVo in Florence with partner Michael Peterson. The diminutive restaurant made a bit of a splash for its adventurous dishes, but after a year or so Bodenstein jumped at the offer to take the helm at Chalk, where he introduced his popular duck fat fries and bacon-infused Old-Fashioned cocktails.

The enthusiasm for local food also parallels the optimism and promise of our local community. Cincinnati—particularly downtown—is dramatically transforming right before our eyes and palates. Nicholson’s is a 15-year-old restaurant that sits at the heart of a block finally growing into its destiny as an art and theater district: Within one block of the Contemporary Arts Center and Aronoff Center for the Arts, you’ll find 12 restaurants and bars. By the end of 2012, the Boca Restaurant Group will add two more, the 4EG group will add another, and the contemporary chic 21c Museum Hotel (currently under construction) will launch its award-winning, foodie-getaway restaurant, Proof. The dining glitterati will swarm. The cluster of good restaurant options will raise the bar for all. Anyone not keeping up will eventually atrophy.

Nicholson’s made a choice last fall to take charge of a tired menu with (mostly) mediocre pub food and give it a more distinctive voice. To remind local diners that they were here before those young dog-toting punks with their exposed brick and crafty ales in Over-the-Rhine, they branded themselves Cincinnati’s “first and finest gastropub,” and brought in Bodenstein in November. His new menu (one he’s been tweaking since) was introduced in March.

Where the menu was once populated by more rib-sticking dishes, Bodenstein’s version features plenty of snacks and small plates for grazing, and not-quite-brawny, straightforward sandwiches and main dishes. But don’t expect to find delicate foie gras preparations (except to flavor the deviled eggs crowned with candied lardons or pickled jalapeño); diaphanous slivers of dried kiwi adorning a silky puree; sous vide dishes; or plates painted with swipes of fruity glaze.

The menu follows more of the true gastropub guidelines: seasonal ingredients with touches of the exotic, simply presented. There’s a drippy (and nearly soggy) mushroom poutine with truffle and bowls of oil-slicked olives with candied orange peel and almonds spiced with fennel and chili. Tubs of salty pork butter, goat butter, and jam accompany thick slices of warm artisan style ciabatta (quite good, but decidedly not baked in house, as our hyperbolic server promised; instead, it’s from Ecce Panis, a bread company in New Jersey).

The charcuterie board is laid out with housemade terrine, liver pâté, and superb cured meats—country ham, coppa, and lomo—from one of the rock star producers of salumi, specializing in “forest fed” meats: Woodlands Pork of West Virginia. Solace can be found in bowls of turnip and potato soup, or brothy Parmesan chicken with polenta dumplings. Crab cakes—usually stuck in the 1980s, oversized as they are and dressed in the salad equivalent of mall hair and the cheap cologne of chili mayo—are hot, petite, and crabby with a delicate crunch of crust. My single favorite small plate is a duo of fennel-tinged seafood sausages, made from fresh haddock and rock shrimp, with a rivulet of warm buttery lemon vinaigrette.

Nicholson’s is a big place that turns over a lot of seats (especially during Broadway Across America runs, upwards of 300 covers a night, seven nights a week) and Bodenstein and his sous chef J. McGrath have a kitchen staff of 20 or so to accommodate. But despite that, not everything comes out consistently—a barely warm and uninspired croque madame one evening, a burger ordered medium rare and delivered well done another, disappointingly limp duck fat fries on two out of three visits, desserts that aren’t memorable enough to order again.

Nicholson’s is a handsome pub, its big island of a bar majestically columned, set atop a vintage black-and-white tiled floor under a soaring ceiling, and ringed in nookish booths. Its clubby intimacy makes it easy to belly up and enjoy their impressive collection of 38 single malts (I fell for the full-bodied Glenmorangie Nectar D’or with notes of toasted oak and vanilla) or a Scottish stout. If you are a small group, the bar is preferable over the dining room at the back of the house, which feels less like a gastropub and more like your dowdy great aunt’s dining room.

After 15 years on the scene, a restaurant builds a dedicated customer base. Not everyone is amenable to change. In some ways, it feels like Bodenstein may be dialing back his skill set and muting flavor to ease his way into the hearts and palates of those regulars while he explores what new frontiers are possible. The service staff’s genuine enthusiasm and support is a reflection of where we are as a city. A restaurant in transition. A city in transition. I’d be excited too.

Atmosphere
Handsome downtown gastropub with good food, the best selection of Scotch whisky in the city, and men in kilts.

Originally published in the June 2012 issue.