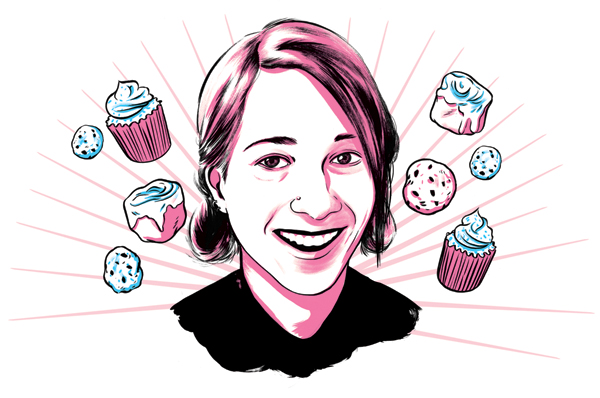 Between her video series on YouTube and her tasty, animal-product-free creations for Sweet Peace Bakery, Mary Beth King brings veganism to the masses.

Where did the inspiration for Sweet Peace Bakery come from? I had a friend buy me a vegan cookbook. I started baking with it but kept eating everything because it was all so good. That’s when I thought how ironic it would be if I became a fat vegan. So I started giving it away. Even some of my non-vegan friends liked it.

How did this translate to The Bakerist, your baking how-to videos? There’s a market for people who want to try vegan food and baking. I want to let them know that it isn’t scary.

Between the Wonder Woman costumes and dance moves on display, you certainly aren’t shy about sharing your personality. No, in general I’m kind of a fun person. I worked as a Girl Scout camp director for 10 years, and you have to act goofy there. So I’ve used The Bakerist as an outlet for that.

You mentioned your parents in one of the videos. What’s their reaction to all this? I don’t think my parents even know how to watch YouTube. But I’m sure they wouldn’t be surprised.