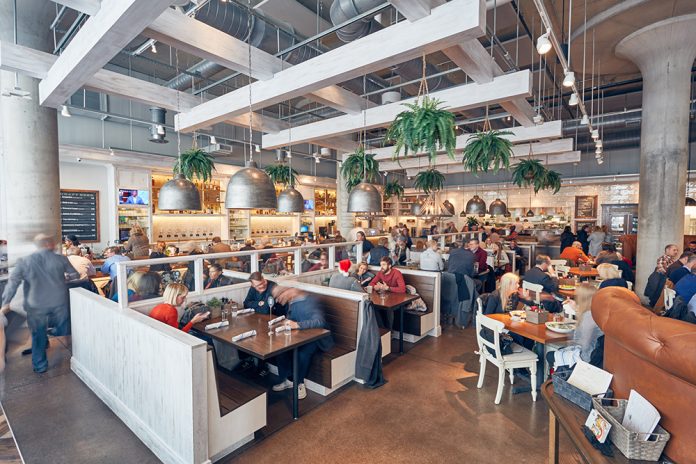 Most of my meals at Maplewood Kitchen took place around Thanksgiving, a time when groups of very disparate people are thrown together. Whether deciding what subjects can be safely discussed at the table (not politics, certainly!) or choosing a movie at the cineplex, it takes some careful thinking, not to mention plenty of compromise, to keep everyone content.

Maplewood Kitchen seems to have been designed for such occasions. And like the movie that the whole family ends up seeing on Thanksgiving weekend, you can be sure of several things when you eat there: first, there will be a solid level of craftsmanship on display, everyone will leave happy enough, and nothing will fall below a certain standard. You can also be sure that you won’t remember much of it two weeks later.

Maplewood is the latest effort from local restaurant juggernaut Thunderdome, owner of the Currito franchise. The group (founded by brothers Joe and John Lanni and Alex Blust) has launched The Eagle, Bakersfield, and Krueger’s Tavern here in Cincinnati with spin-offs of the same names in other cities, including Charlotte and Pittsburgh. Although there is currently only one Maplewood in existence, it already has the feeling of a chain. From the stock airy decor (think Pottery Barn catalog) to the hackneyed bits of calculated whimsy (ooh, striped paper straws!), every aspect is easily replicable. These restaurants are financially successful for a reason: When it comes to high-volume dining, the gentlemen behind Thunderdome know exactly what they’re doing.

Much thought has gone into crowd control. Unlike most restaurants at this price point, you choose your own table and do not have an individual server. Instead, a line forms down the right side of the room, with menus dangling from a wall-mounted railing. Someone is usually present to demystify the protocol, ushering would-be diners towards the counter, where they can pick up bottles of quite good fresh juice and some pre-made baked goods. A cashier takes the order Panera-style, provides a number, and the food is delivered shortly.

One crowded Saturday night, we weren’t sure how to get a table. Should we split up, or stake out a space? Within seconds, an employee assigned us a number and directed us to our seats. The whole place runs like clockwork, and food comes quickly even at the busiest times. The service is friendly—one person remembered us on a second visit—but you are attended more by a swirl of faces than any one person. And how much to tip in this “fine-casual” establishment, where you pay first and pick up your own coffee and drinks, is still a puzzle to me.

Maplewood identifies itself as a “West Coast eatery.” There are Italian dishes, some Indian flavors, Mexican and French elements, and standard American fare (burgers and rotisserie chicken). Does it all work together? Well, in true West Coast fashion, it isn’t really trying to. The food just exists side by side. Only once—when I tasted the mustardy Provençal potato salad after a bite of the chicken tinga with tomatillo salsa—did I feel a harsh clang of incongruity. The most distinctively “West Coast” item—the poke, a raw tuna salad with Hawaiian roots—was also the most disappointing. The pallid looking tuna, overwhelmed by sesame oil, had none of the freshness that good poke should have.

Interestingly, the most conventional menu items—the pappardelle and the short rib—are the most satisfying. The pappardelle with house-made sausage was an intensely peppery delight, with perfectly al dente noodles (also clearly made fresh), and the short-rib was fall-apart tender, with a delicate, tomato-infused white bean cassoulet. I salute Maplewood for using one of our most neglected vegetables—romanesco—spicing it with curry, and covering it with a lemon vinaigrette worthy of its magical, fractal beauty. The cocktails, albeit slightly stingy on the booze, are also good, with the Bourbon Honey Sazerac a particularly good choice.

The restaurant’s limitations become clearer at brunch. From the salty, lifeless chimichurri on the steak ($14) to the two diminutive lemon ricotta pancakes ($11), I often wondered why I was paying so much for such average food. The Maplewood omelette is a good indicator of what this restaurant can and cannot do. It looks decent, but comes stuffed with a bland ham-and-bell-pepper filling, and tastes mainly of salt and egg. Why was it done this way? Well, making a proper omelette—with a large, thin surface, without breaking the skin when it’s filled and folded—is hard.

Talented chef Bhumin Desai, formerly of Jean-Robert’s Table, has developed a vision that can be executed at high speed and duplicated without difficulty for a steady stream of diners. This can result in excellent dishes, like the richly spiced hash browns, cut brownie-style from a huge tray, but often the food simply tops out at “good enough.”

The only thing that was actually bad at Maplewood was their house drip coffee, which might as well have been hot water. I suspect the issue is preparation, and not the La Terza beans. To give Thunderdome its due, I have no doubt that they will fix this; problems do not go unaddressed in their restaurants. While Maplewood may not deliver a spectacularly memorable meal, it is a worthy addition to the city’s dining landscape.

The Takeaway
Not terribly soulful or distinctive, but fast, fun, and pretty darn good, particularly for dinner.