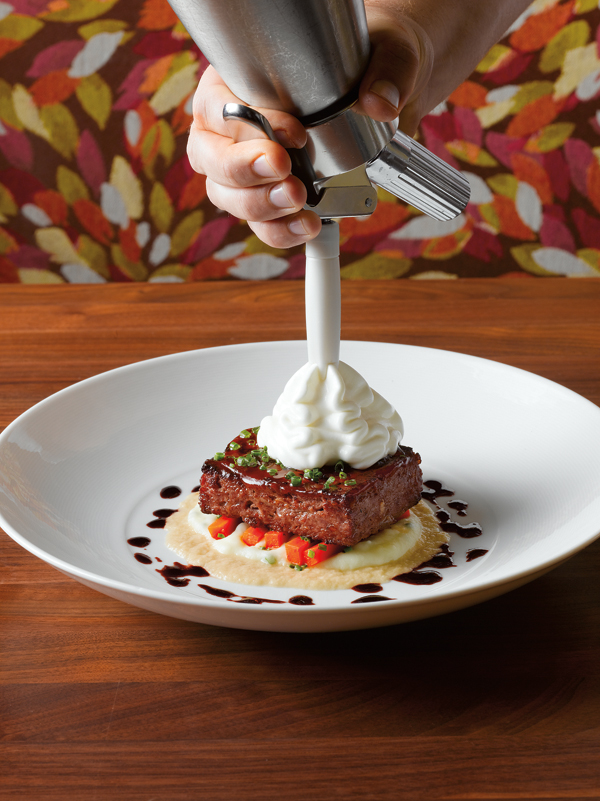 There is a couple sitting near us in the dining room of Local 127. I assume they are married as they are eating alone, and in complete silence. Normally, I take this to mean years of disappointment cemented by unmet expectations, but in this case the usual aura of disillusionment is replaced by an intense focus directed at a plate sitting between them. From my vantage point, it appears to be a mound of shaved meat. As Elvis Presley croons “I can’t help falling in love with you” over the restaurant’s sound system, they each place a forkful in their mouths and close their eyes. Their jaw movements are minimal, slow, savoring. With each silent bite their expressions soften until they wear the flush of satisfied lovers. We try to avert our prurient gaze but we just can’t look away. The couple lock eyes after the last bite and share an appreciative half-smile. Sighs follow, but still no words are exchanged. We’ve heard and seen enough. Whatever it is on that plate, everyone at our table wants it.

If mind-blowing pleasure matters to you, you will order it as well. So intense is its essence, we can smell it even before the server places the small white plate piled with deep pinkish-red ribbons in the center of the table. It is only slightly colder than room temperature, well marbled, dense, with fat that liquefies and melts as it meets our warm palates. Dry cured from heritage breed pigs raised on sunflower seeds, acorns, and hickory nuts in the hills of West Virginia, the ham rivals Spanish Iberico or Italian culatello, considered some of the best in the world. Both texture and flavor—sweet, nutty, and woodsy with only a semblance of saltiness—rendered me nearly as mute as the content couple nearby. Michael Stipe is yelping in the background about losing his religion as the last bite glides over my lips. If becoming ham is a pig’s fate, then this is as heavenly as it gets.

It is moments like these that construct our awareness of what really good food is about. A singular ingredient with flavor this penetrating requires little, if any, embellishment. Unadorned except for a few shreds of pickled okra, this ham would have suffocated under any fussier treatment. And it’s the mark of a good chef to forego the culinary cartwheels and choose restraint. “I am in pursuit of good ingredients,” chef and master sommelier Steven Geddes explains as we talk over the phone about Local 127’s menu.

Since arriving from Las Vegas a year ago to open the restaurant in the space formerly known as Jean-Robert at Pigall’s, both Geddes and his chef de cuisine Kyle Johnson have busied themselves forming bonds with local and regional farmers, purveyors, and artisans that contribute product to the menu, paying tribute to them (and to other “inspirations” as well, such as grandmothers, Julia Child, James Beard, and notable contemporary chefs Geddes has been associated with in various ways) by dedicating a corner of the menu to praise and thanks. But frankly, at the risk of sounding cynical, this is hardly novel. Scores of food artisans have popped up all over American menus, so much so that the ideology is in danger of teetering towards dilution.

Conceptually, “local,” “sustainable,” and “organic” are hotter than an acre of manure-grown peppers, but that isn’t an automatic guarantee of good food. In fact, given the firestorm of controversy that Local 127 opened under—generated by a very public divorce between beloved chef Jean-Robert de Cavel and his former business partner Martin Wade, who retained custody, cleaned house, and introduced his new chefs and restaurant last September—the initial reaction to the obviousness of the name and concept was one raised eyebrow and a collective hmmph. But once curious diners began to broadcast the news about some very flavorful dishes coming out of the kitchen, the standoff was short-lived.

The medallions of bison in front of me are uniformly medium-rare end to end, a nearly impossible feat in most familiar cooking methods, which produce pink centers that gradate to medium-well along the perimeter. The “local meat loaf” of ground pork and beef is so pink it’s nearly cranberry in color. The chicken—oh, the chicken—is incomparably tender and moist. This can only mean one thing: sous vide, the method of slow-cooking proteins inside vacuum-packed bags immersed in temperature controlled water baths. Geddes says he has been using the sous vide method for about five years, and while it doesn’t drive the menu, he can’t imagine going back to more traditional cooking methods for some dishes. “People are afraid to undercook chicken,” he says, “so it is almost always overcooked. It never is with sous vide.”

In the process of bathing the meat in its own fat and juices inside a hermetically sealed bag, the clarity of flavor throughout is magnified and then both the chicken and the bison receive a quick pan sear to brown the outside. The method serves even some fruits and vegetables well. “Sous vide carrots are the most carroty carrots you’ve ever had,” says Geddes.

It’s true. The brilliantly orange carrots that accompany the pink block of meat loaf (the unusual color is from the absence of oxidation in a vacuum-packed bag) don’t taste like anything other than Carrot x Carrot = Carrot². But as in any preparation, sometimes there can be too much of a good thing. I am telling you with a completely straight face that I appreciate the amped-up flavor of hot potato foam direct from an iSi siphon canister. However, the quantity dispensed by the server blanketed the entire plate, including the carroty-ness of those carrots.

The gentle hum of water baths is hardly the only sound in the kitchen. Scallops are pan seared (atop a turnip puree with puffed rice and citrus vinaigrette); burgers from grass-fed beef are pan-fried (with white cheddar, red onions, and thousand island dressing); dreamy carnaroli risotto is slow stirred (with smoked chicken, crunchy bits of fried rice, and basil); golden trout is brined and smoked (tossed in olive oil, lemon, herbs, and pickled onion, it is not to be missed). And as the name implies, the menu weaves in and out of seasonally available ingredients. One evening a salad of delicate greens showcased diaphanous slices of gorgeous watermelon radishes. Accompanied by a tiny croquette of warm fried goat cheese, the ingredients were allowed to shine by just the lightest dressing of white balsamic vinaigrette.

The formerly hushed, stage-lit dining room of Pigall’s is a bit brighter and livelier in the Local 127 incarnation. However, the benchmark service has been replaced with welcoming but inadequately informed waitstaff. We were told the meat loaf was made from “one-third each veal, buffalo, and pork” (not beef and pork, as Geddes told me); when we asked how the pork belly was prepared, we got “not sure” (it is brined and confited). And in an unsolicited exchange, our server was uncertain where mustard fruit “grows” (it’s a mixed fruit compote similar to chutney). As well, the staff’s wine recommendations—from a very compelling list—wavered between puzzlement and safe bets. As the chef and sommelier, Geddes’s reach should extend beyond his flavorful food and relationships with local farmers and bring his staff up to speed.

Still, there’s much to love about Local 127. Earth, Wind & Fire follows us out the door, singing: “Let this groove light up your fuse.” To that we say all right.

Originally published in the August 2010 issue.