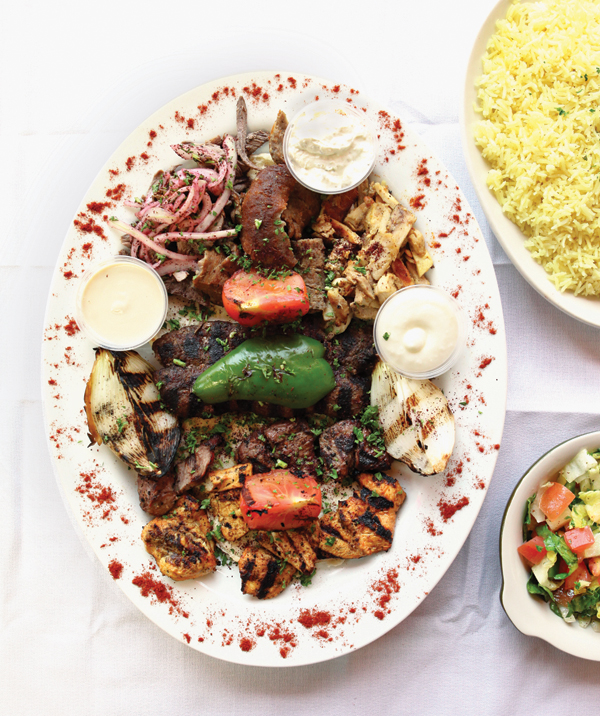 The fusion of Middle Eastern and Mediterranean cuisine at Jerusalem Restaurant is a tasty reminder not to judge a restaurant by what covers its windows. Nearly the whole menu is theatrically painted across the Clifton eatery’s panes. It’s a look better suited to a car dealership trying to move last year’s model. But if you make it past the garish entrance, the restaurant’s new management has a complete soup-to-nuts (or hummus-to-baklava) dinner waiting for you. The menu’s largest offering, the Jerusalem Dish, would fit right in on Man v. Food. It is, quite literally, most of the menu’s entrées heaped together on one giant platter; a second plate loaded with rice (or fries), and a third holding a side salad. Of the six meats that make up this monstrous meal, the beef shawarma reigns supreme. Hints of cinnamon and nutmeg lend the shaved beef a rich, complex flavor that seems to change with every bite. The chicken kebab is also laudable. Its blackened, spicy exterior gives way to a juicy, tender center, and the accompanying garlic sauce plays the perfect foil to the chicken’s spicy marinade. The gyro was less impressive, the lamb bland and overcooked, relying too heavily on the cool yogurt tzatziki for flavor (adding the hot gyro sauce did nothing to fix the problem). Among several strong appetizers, the best was the foul (pronounced fool), a lemony fava bean and tahini dip served warm with pita. For dessert, what the baklava lacked in crunch, it more than made up for in cloying sweetness. So don’t let the flashy outside fool you. Jerusalem Restaurant offers a meal fit for a (seriously hungry) king.

Originally published in the May 2011 issue.