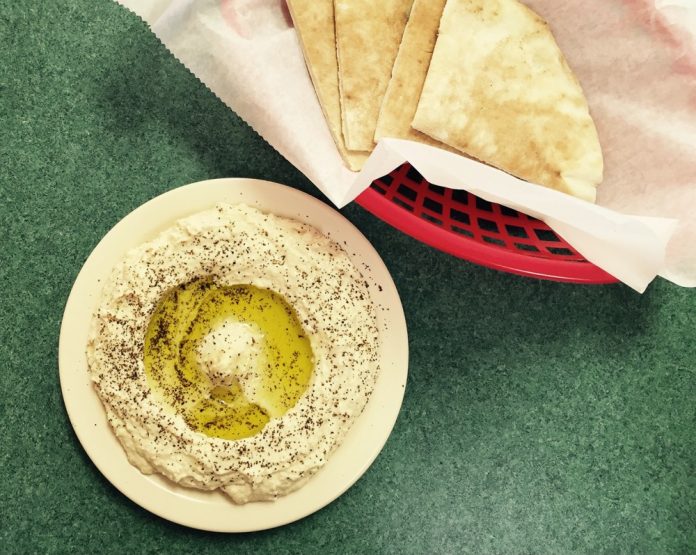 I wonder if Odysseus would have stayed strapped to that mast if his ship had passed the smells of the Al-Amir Café instead of a bunch of women singing on some rocks. When the door of the Al-Amir Café is open—and that seems to be most of the year—through all the bus exhaust and stale sidewalk odors, the heavenly aromas tempt every nose. Despite the unassuming facade with its hand-painted sign, the smells of this Middle Eastern hole in the wall seem impossible to pass. Who needs advertising when you’ve got this? The gyro is a hot item here, but I’d advise you to forgo that and try something a little more exotic, like the chicken shawarma platter, the falafel wrap, or the grilled fish sandwich. If you’re looking for something boring, like a double cheeseburger or mozzarella sticks, you’ll find those, but why not be adventurous and go for the baba ghanoush (grilled eggplant dip), the kafta platter (spiced ground beef), or the spanakopita (spinach pie.) You really wouldn’t expect a dive like the Al-Amir to be right next to the Westin. It should be in Cincinnati’s “Little Jordan” district. Then you remember: Oh yeah, Cincinnati doesn’t have a Little Italy, much less a more exotic ethnic neighborhood. Still, the inside feels perfunctory and foreign, much like the little Greek places you’d run into on the back streets of Athens. People tend to stand out front engrossed in the menu in the window. At first you think they’re struggling with those seductive sounding names. Then you realize: they just want to get their daily whiff of the Al-Amir.

Originally published in the February 2013 issue.