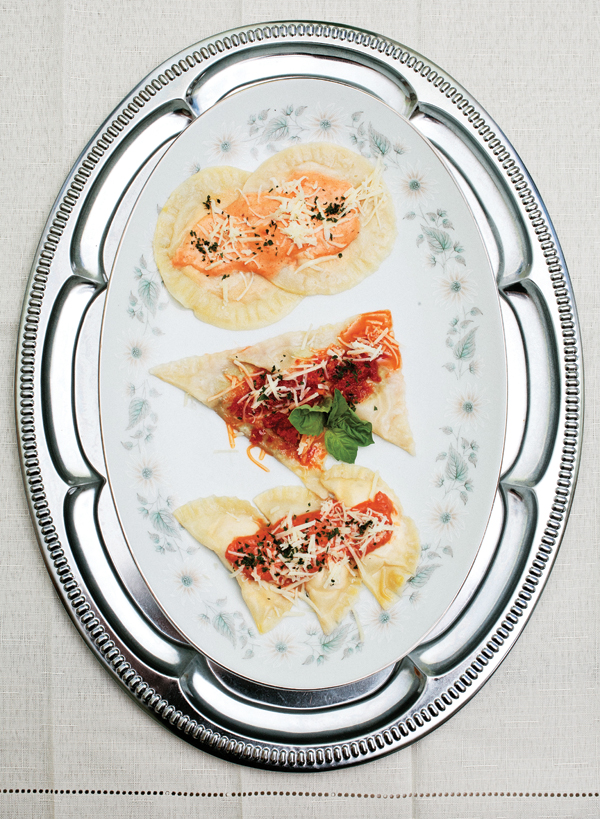 I am immediately drawn to the long table that sits in a slightly sunken portion of Europa Bistro’s patio. It is covered by an arbor of shade trees and vines; its surface is weathered, the chairs mismatched. Though it is about 10 yards from the busy street where pubs, a tattoo parlor, and specialty shops devoted to vintage threads, stuffed bears, magic tricks, pet products, and “All Things Princess and Fairy” converge to create the bustling MainStrasse Village, the outdoor nook invites lingering. On this night there are eight customers doing just that.

Coffee cups and empty gelato bowls litter the table. Boisterous laughter erupts and subsides in waves as stories get passed around. Their body language reveals them to be four couples, familiar with each other in a way that suggests many other nights spent gathered around a table together. There are probably children at home waiting to be soothed and sitters waiting to be relieved, or dogs needing to be taken for the last walk of the night. It doesn’t matter. Whatever waits ahead, it waits. No one seems concerned with anything other than their time together. As it should be. As it always seems to be in Italian restaurants.

We take seats under a canvas umbrella. The early June night is lovely; fireflies are just beginning their dance. We order braciola as an appetizer and are disappointed to discover that no wine is available. Italian food without wine? Our server explains: Customers are welcome to BYOB, and a liquor license is in the works.

Nicola Palmieri, the bistro’s owner and chief cook, appears. He makes his way over to the group of eight with a shuffling gait. He’s what you would expect an Italian cook to look like, the sort whose bulk says Trust me. The way of an Italian host is to make you feel en famiglia. Accordingly, Chef Nicola launches into a story after inquiring about the table’s satisfaction with dinner. With heavily lidded eyes and only a trace of his homeland in his voice (which sounds remarkably like the morphine-drip voice of late film noir actor Peter Lorre), he recounts a story about George Clooney, one he has no doubt told before.

According to Palmieri, when Clooney and some of his crew had lunch at Europa Bistro during the 2011 filming of The Ides of March, he described in some detail the inside of Clooney’s home on Lake Como in Italy—including a couple of secret passages—much to the actor’s surprise. Palmieri waits a beat with the polish of a seasoned comedian, then tells the table that when he was growing up in Como, he used to accompany his father on his side job of polishing marble. Apparently, Clooney’s 18th century villa can occupy a marble polisher for an entire afternoon. The diners react with replies of  “small world” and—more important—looks of admiration that acknowledge the endorsement of one of the most recognizable celebrities in the world. Which is the point, of course.

The braciola—a rather simple pork version, the tenderloin stuffed with mozzarella, provolone, and roasted garlic—has come and gone and in its place two main courses have been set before us. They bear the names of Julius Caesar (slow roasted boar) and Marco Polo (chicken breast with Italian sausage), the first to denote the Roman general’s reputed favorite dish, the second to honor the Venetian’s epic travels along the Silk Road (and because Chef Nicola thought “Polo” was a clever play on words). Both are served over creamy polenta, fork tender, and represent the sort of simplicity that keeps drawing us back to the Italian table over and over.

It’s this combination—the peasant food, the night, the lights, the arbor-covered patio, the congenial raconteur—that transports me to a similar terrace of a small trattoria called Latte di Luna in the renaissance village of Pienza, Italy. There we spread chicken liver pâté on crostini, washed down locally made pecorino cheese with carafes of vino della casa, and turned our forks and fingers over to a family-style platter of crisp-skinned and savory roast suckling pig. Idleness was expected.

The table of eight finally gets up to depart. Chef Nicola is there with thank yous and good-byes. We lean back in our chairs a little bit more, stretch our legs. The warm blueberry bread pudding slowly disappears bite by leisurely bite between sips of coffee. We might be here a while.

Two weeks later, Chef Nicola is making his rounds in the bistro’s small dining room. This is my third visit. We spent the second sitting at a tall table for two across from the deli case (the dining room was reserved for a private party) sharing a decent, if a bit sluggish, potato gnocchi (when it comes to local handmade gnocchi, Chef Cristian Pietoso’s ethereal pillows make all others seem bloated by comparison) with crab brandy sauce and lump crab meat. “Lump” refers to the grade and is not to be confused with size, particularly in this dish, where a generous amount of sauce clung to a few toothpick-size shreds.

Fresh ingredients, balance, and simplicity define Italian and Mediterranean food, which is why the moat of  “spicy pistachio yogurt sauce” surrounding the otherwise terrific braised goat over spinach couscous and polenta seemed like an unnecessary distraction. An Italian birthright commands that you leave well enough alone. It was a weeknight, with an early call for me and my dining partner, but idleness once again took a seat when a strong summer storm began to blow in. Instead of the check, we settled in with scoops of gorgeous house-made pistachio and cinnamon gelatos and mugs of coffee.

Tonight, when we order the lamb porterhouse chops, the chef wistfully tells us, “My daddy made them every Sunday. I miss those days.” He stands at our table, at the ready in case we should need an anecdote. We order the ravioli trio as well—artichoke, roasted chicken, and champagne lobster—another of his father’s recipes and one that the elder Palmieri made back in the day as the pasta cook at the legendary downtown restaurant Caproni’s. We add the Bolognese over rigatoni; again the roasted boar.

Palmieri grew up under the strong influence of the family table (he’s been making gelato since he was 10 years old and regularly features a dozen flavors), with both northern and southern relatives contributing regional specialties to his menu. Except for a seven-week course offered at the Culinary Institute of America in New York, he followed a career path in computer and software sales, retiring just four years ago. He bought his niece’s Italian deli—Angelina Fine Foods—in Findlay Market, closed it two years later, and opened Europa Bistro and Café in 2009 with his son Jeff as sous chef and wife Carol on desserts.

Perhaps it’s this late-in-life choice that requires the bistro to play catch up. Despite the Italian pedigree, the dishes are hit and miss. Those lamb chops? A hit; simply perfect. The ravioli? The pasta sfoglia (egg dough) seemed overworked, the lobster meat drab. The Bolognese is hearty, the slow-braised goat and boar tender and infused with flavor, their polenta companion dreamy. Except for the superb gelatos, the desserts suffered a beating from living in the cold case too long: a hefty slice of carrot cake was dry and tinged with refrigerator burn, the cannoli limp and lifeless.

The language of Italian food is home, its heart is the land. Palmieri knows that and it shows. With a little more attention to detail, the welcoming food will match the atmosphere that encourages guests to sit, relax, eat. Go ahead, try it. We’ll wait.

Originally published in the August 2012 issue.