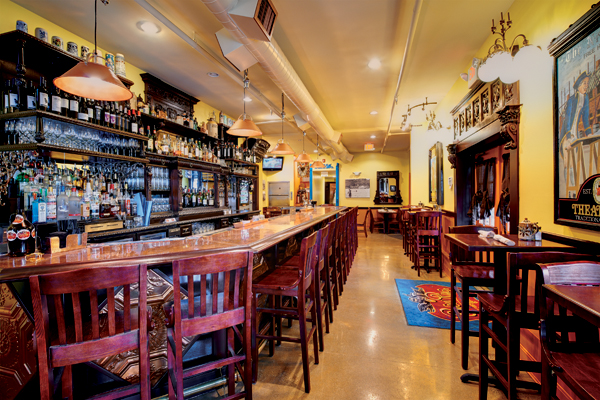 The second indication—the first being its name—that the five-month-old gastropub called BrewRiver is a beer-forward establishment is the antique bar of obsidian mahogany. Twenty-three taps line the back bar. Growlers (for neophytes, a half-gallon glass to-go jug), steins, and beer glasses stretch as far as the eye can see.

The third clue is the menu itself—a large, unwieldy clipboard stacked with a half dozen pages of card stock that’s awkward to navigate—where the words BRGP ale appear frequently throughout: in the battered fresh cod for the fish and chips, as an ingredient in the chicken liver pâté, in the pork rillettes, in the vinaigrette dressing for the house salad.

The BrewRiver GastroPub ale is a result of an exclusive partnership with Indiana’s Great Crescent Brewery. In addition to the pale, blonde, and dark ales, a stout, a porter, a couple of lagers, and several seasonal brews—many named after Cincinnati icons—make up the house selections. If we need any further proof of the evolution of our beer palates, it can be found in what’s missing from the list of nearly 50 “guest” brews from the likes of award-winning Founders Brewing Company of Grand Rapids, Michigan, and Weihenstephaner, the German brewery considered to be the oldest existing in the world. There’s not a Corona or Budweiser—or even a Heineken—in sight.

It’s a choice that’s as much about an allegiance to Cincinnati’s brewing heritage as the rise in popularity of crafted artisan beer, a trend that owners Joby Bowman, Christian Babani, and Chef Michael Shields (all home brewers themselves) have matched with a chef-driven menu to create what they promise is a “truly authentic experience.” The food doesn’t entirely live up to that commitment, but judging from the standing-room-only crowds that have occupied BrewRiver since its July opening, it has enough appeal not to lose its head.

Gastropub is a relatively contemporary classification for a restaurant, appearing in Britain in the early ’90s to describe the sort of comfortable pub that puts an emphasis on gourmet grub in a relatively modest atmosphere—daily menus, polished wooden floors, cloth napkins—and is able to keep both gastronauts and drinkers content. A restaurant that doesn’t mind if you only want to settle in to meet your mates and raise a pint or two, and a bar that offers badass downtown-style fare and doesn’t mind if that’s all you showed up for. Though dishes like bacon-wrapped figs, truffle-flecked deviled eggs, and roasted bone marrow with onion jam have replaced the loaded potato skins, nachos, and chicken wings of the ’90s, most gastropub fare generally suits its surroundings.

And it makes sense. The food revolution that has sounded the horn of localism, artisanal methods, and bold flavors lends itself perfectly to the casual refinement of a pub, and dovetails with craft brewing in every way. The fruity and floral aromas of hoppy IPAs and pale ales, the dark chocolate and espresso notes of stouts and porters pair as well with some foods as grape varietals. The soft carbonation and medium body of BrewRiver’s Felsen Aged Lager pairs nicely with the richness of Michael Shields’s chicken liver pâté; the New Orleans–style barbecued shrimp is a testimonial to the smoky aesthetics of the Rapturous Dark Ale.

Shields and Bowman lived for years in New Orleans, where Shields worked his way from line cook to butcher to sous chef at NOLA, Emeril Lagasse’s rustic casual restaurant. Shields turns out hot cornmeal crusted oysters with sriracha aioli, pickled ginger, and shredded iceberg lettuce for a po’ boy that’s near as fine as any—except for a bun that disintegrates before its time is due—and a muffaletta layered with genoa salami, mortadella, provolone, and house-made olive relish on a sturdy sourdough bun made by Sweet William’s Bakery that gets it right save for a thick slice of pale, unripe tomato.

The muffaletta, along with a few other dishes, falls short of BRGP’s promise “to use the freshest possible ingredients, chosen and prepared at the peak of their flavor.” Why saddle good ale-brined and house cured bacon with a slice of anemic tomato on a BLT? With three ingredients on the farmhouse bread (again from the outstanding Sweet William’s Bakery in Fairfax), the sandwich can only be as good as they are. A wedge of that pale, hard tomato shows up again alongside the fish of the day: a lovely filet of Scottish salmon draped over a rather bland cauliflower puree. The “seasonal” manifesto isn’t a marketing tool. If you make the claim, your kitchen needs to stand by it.

The kitchen also turns in an uneven performance on the Belgian farmhouse ale-steamed mussels, about 25 percent of which were closed (nothing wrong with that, except we’re paying to eat 100 percent) and sitting in a watery broth that no one at the table—soppers, all—was interested in finishing. Other items also just miss the mark: a beef short rib poutine overwhelmed by a heavy dose of curry; pommes frites that were excessively oily and limp; and a double chocolate stout cake rich with a fine roasted malt and caramel flavor, served cold and hard. Serving it at room temperature would allow the flavor to pop and the texture to soften.

Recommended are the aforementioned chicken pâté and barbecue shrimp, redolent with red pepper, garlic, and butter. Pork rillette—confiture de cochon, or “pig jam”—made with BRGP ale and served in a mason jar with toasted sourdough and briny pickled vegetables to cut the richness (carrots and green beans on the evenings we were there), is simple, fatty, and just salty enough to carry it over the palate. Shields also makes a solid gumbo, with shreds of seasoned chicken and chunks of New Orleans andouille suspended in a hearty stock enlivened by a carefully tended red-brown roux.

Music from local piano man Todd Hepburn drifts up to the second-floor dining room. Like the barroom downstairs, the energy is lively; the service snappy and familial. The chef follows a server down the stairs with a tray of burgers and fish and chips. Another trails him with a warm baked apple Betty and a bowl of fresh raspberries, a scoop of ridiculously good housemade Rogue hazelnut gelato melting across the Betty’s streusel topping. That same gelato is bonkers in a glass of Barq’s root beer, or try the full-on beer version: raspberry lambic gelato in a glass of St. Louis Framboise raspberry lambic ale.

The second floor kitchen serves both rooms, and Shields hopes to add a chef’s table. Herbs grow behind the generous street level patio, and additional gardens are planned. The partners are looking at nearby buildings to establish their own brewery.

As BRGP’s answering machine says: “Local is our focus; libations are our passion.” That passion is obvious—and we love it. As for the local focus, if not executed well, it doesn’t matter if the ingredients were handpicked on a nearby farm at sunrise by an order of nuns. When you make a public declaration of your devotion to local and seasonal, and proudly announce you’re serving ingredients at the “peak of flavor,” diners are going to notice when they’re not.

Originally published in the December 2012 issue.