Home Dining Reviews Getting the Boot 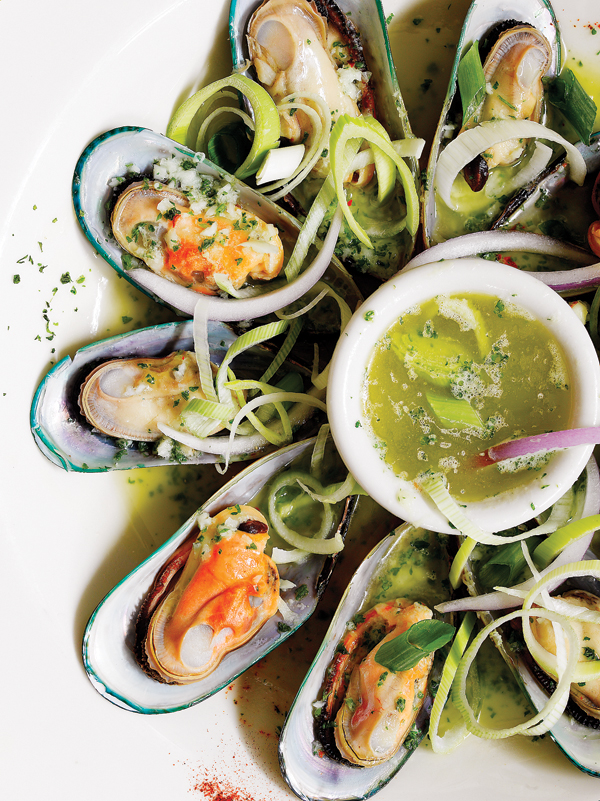 Growing up amid the 1960s convenience-food revolution, I was enamored with the familial ambience of Italian restaurants. I begged my father to take me to Caproni’s (near his office at Sixth and Main) as much for the way the owner greeted every customer like family as for the steaming bowls of minestrone, heaping plates of spaghetti, and footed dishes of spumoni ice cream. Set next to the railroad tracks that run the length of Blue Ash Road in the leafy, quiet neighborhood of Deer Park, Barresi’s Italian Restaurant was another favorite. Much smaller in the 1960s than it is today, it seemed both homey and exotic. Homey for its single framed and canopied window and how Odessa Barresi welcomed you at the door; exotic for the scent of garlic (an infrequent ingredient in our own kitchen) that permeated the tiny dining room with its handful of tables and carafes of red wine that were delivered to each as a matter of course. Though 20 tables larger and no longer the province of Sal and Odessa (who have since retired to Florida), at its heart Barresi’s is essentially the same family style Italian-American restaurant that they opened in 1963.

And it’s still a family business. In 2005, former employee Sarah Wagner Barnes—who began bussing tables at Barresi’s in 1989 and graduated from Cincinnati State’s culinary program in 1996—purchased the place after working her way through several area kitchens: Terrace Park Country Club, deSha’s, Argosy Casino’s Bogart’s Grill, Royal Oak Country Club, Bankers Club, Maketewah Country Club. It would be tempting, and smart, for most chef-owners looking to distinguish themselves in a competitive restaurant market to crank up a 30-year-old menu. Add some flair—say, wild arugula and blood orange vinaigrette in the salad or roasted baby fennel as the daily vegetable. After all, most contemporary chefs wouldn’t be caught dead serving fettuccine Alfredo. But the 35-year-old Barnes has confidently changed little of Barresi’s, striving instead to uphold her inheritance. Therefore, its menu is not the domain of artisanal Italian: You won’t find squid ink or squab, stuffed zucchini blossoms or rappini. Instead, it’s a nostalgic cruise of Sal’s family recipes—familiar, comforting, Americanized dishes traversing the mixed regional cucina of sauced pastas, meats, and antipasti.

Italian-American cuisine exists as its own great culinary tradition. As immigrants clustered into urban America, the regional recipes of Italy were modified to fit the available ingredients. Characterized by a prodigious use of dry pasta and tomatoes and considerably larger quantities of meats than used back in the homeland, dishes such as spaghetti and meatballs became the archetype for a hearty Italian-American dinner. Detractors may sneer at precooked pastas or breaded veal cutlets cloaked in provolone and marinara, and are quick to refute them as “real” Italian. But for those of us who have never traveled in Italy or experienced any one of the hundreds of “authentic” Italian ristorantes that have dominated America’s culinary scene for the past 15 years, it was the sort of Italian food we first encountered, and so holds a comforting appeal.

Even so, perusing Barresi’s menu, which is embroidered with the usual suspects—chewy strips of fried calamari and paper thin slices of beef carpaccio; Caprese and Caesar salads; Osso Bucco Milanese with risotto and a chunky tomato sauce; seven versions of veal scallopine—there’s little at first that can divert our attention from the basket of zeppoles, warm pillows of fried, salted dough. Halfway through a bottle of sangiovese and second basket of zeppoles, we’ve all agreed what defines an addiction. We give up on them only because we have other dishes to conquer.

Soon enough the half-empty bread basket is replaced with a parade of plates delivered by the quietly efficient waitstaff. The food appears more robust than pretty, plated with just enough attention to signify that someone is in the kitchen who cares (Barnes’s 20-year-old niece Jackie is the sous chef) but not so much as to seem precious, or even studious. Sprigs of fresh herbs get tucked here and there, olive oil is drizzled from a bottle, chocolate sauce is waved over cannoli in a familiar stripe pattern—familial abundance over haute presentation. Scrumptious green-lipped mussels (a plump New Zealand variety), sautéed in a warm bath of garlic and olive oil, are audibly favored by my whole group for their freshness, prompting the table next to us to place an order. More butter and garlic appears with the sautéed artichoke hearts. Generously spritzed with garlic and oil sauce, the remaining butter slick begs to be sopped up with bread. The basket reappears.

With the Caprese salad, I hoped for the best and expected the worst. Midwest Decembers do not produce tomatoes with pronounced flavor, even if they are trucked in. These were underipe and anemic at best, which left the few slices of buffalo mozzarella dressed with shreds of basil and olive oil the only things worth eating. Since great Italian cooking prides itself on simplicity and seasonality, I’m continually baffled when restaurateurs serve anything less than completely fresh ingredients. Especially at Barresi’s price points. Ripe, flavorful tomatoes would have made the $10 price tag palatable.

In addition to the veal variations, more than a dozen seafood, chicken, and steak dishes are created by interchanging familiar preparations: Florentine (spinach, cream cheese sauce, and pecans); Sicilian (capers, garlic, olive oil, and lemon); Marsala; and lobster cream sauce among them. Honestly, most of these sauces are decent. The daily fish (halibut on both my visits) is especially gratifying draped in the Pettrina sauce with mushrooms, artichoke hearts, shrimp, garlic, olive oil, and butter. And anyone who likes a big bowl of pasta will find both familiar comfort and flavor in the linguine with clam sauce or the penne primavera with the holy trinity of garlic, olive oil, and butter. The al dente pasta appropriately provides just that bit of resistance to the teeth before it slides over the tongue. No doubt life itself is better with butter and garlic, but there is an undertow of banality and uniformity about many of these selections that I can’t quite put my finger on, as if the meats and seafoods are all steamed prior to being finished off in a pan or the oven, then topped with one of the mix-and-match sauces. There was nothing awful about any of the 16 entrées we sampled, but nothing stood out from the pack or inspired deep affection. And here’s the reason that matters: the menu is not inexpensive, nor even moderately priced. Despite reduced portion pricing (a full portion of linguine with scampi is $30; the “three-quarter size” is $25) Barresi’s is more expensive than Primavista, and nearly as expensive as Boca or Nicola’s.

In large part, Barresi’s owes its longevity to family and tradition. What Odessa and Sal began, Barnes and her family carry on. Sarah greets guests, brother Paul bartends, and their father shops for vegetables at nearby markets. The interior is still old-world humble, the scent of garlic is still strong enough to perfume your clothes, and the 46-year-old restaurant still regularly fills its 28 tables often enough to imply that there are countless diners with a soft spot for the Italian-American food they were drawn to in childhood. As restaurant dining has become more systematically woven into our lives, there’s an important place for establishments that recreate family and survive trends, and no other cuisine personifies that more than Italian. If it’s that quality you seek, you will surely find it at Barresi’s. For transcendence, there are other choices.

Originally published in the February 2009 issue.