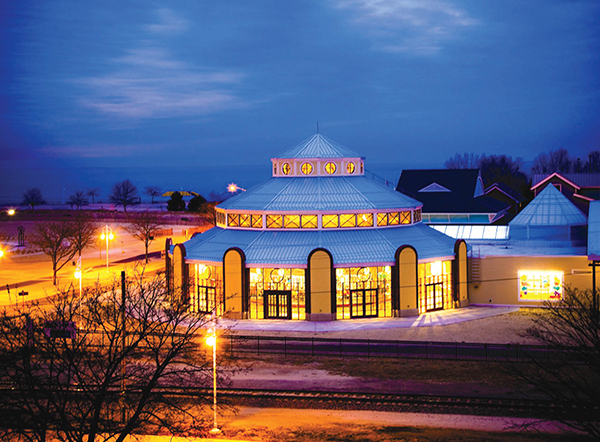 You’ll find St. Joseph and Benton Harbor where the St. Joseph River meets Lake Michigan in the southwestern part of the state—about 90 miles northeast of Chicago. Just four and a half hours from Cincinnati by car, these towns teem with resort accommodations; a vacation-filling variety of food, drink, and recreation; a hip art scene; and a beach.

Lake Life
Take a swim in Lake Michigan’s pristine blue waters at Silver Beach County Park, a 31-acre white sand beach with a storied past. For 80 years this was the site of Silver Beach Amusement Park, which drew thousands of families to the lakeshore until it closed in 1971. The Silver Beach Carousel pays tribute to the park’s original merry-go-round, and next door, kids (and kids at heart) can delight in Michigan’s largest kaleidoscope, the Curious Kids’ Discovery Zone, and the Whirlpool World Compass Fountain. Grills and snack shacks dot the beach, or you can grab a slice at Silver Beach Pizza, found inside the historic Amtrak depot, built in 1914 and still a stop today. The thin-crust ’za is best washed down with the pizzeria’s signature: a schooner (frozen goblet) of beer. Before night falls, stroll to the north pier to catch the sunset at the St. Joseph Lighthouses.

Art All Around
Just beyond the beach sits Krasl Art Center, host of the annual Krasl Art Fair on the Bluff (July 12–13). The event dates back to 1962 and features works from more than 200 North American artists, plus a kids’ zone and live jazz. While you’re there, step inside the 17,500-square-foot art center (admission is free) for a look at this month’s exhibit Waves, which showcases contemporary art inspired by water. The center’s collection also boasts 39 sculptures, many on public display around the city.

More art abounds across the river in downtown Benton Harbor’s arts district. At the nonprofit studio Water Street Glassworks, watch students in the hot shop blow glass and cast metal, then cool off next door at Water Street GelatoWorks. After you’ve worked up an appetite visiting galleries and studios, chow down on pulled pork and brisket burritos at Charlie’s Piggin N’ Grinnin’ BBQ joint. Dine a little finer at The Ideal Place, a bistro where the scratch menu changes daily and you’ll find dishes like stuffed flounder or a pear and avocado chopped salad. If you’re looking to go all-out foodie, hit the riverfront restaurant Bread + Bar, which has an exquisite dinner menu—think tartines and roasted Michigan chicken—affordable lunch sandwiches, and a deli case of ready-made eats for picnics on the beach. Also nearby is The Livery, a microbrewery in a former horse stable making craft beers, pizzas, and sandwiches.

Communal Ties
More proof that God is a baseball fan: Benton Harbor is home to the nation’s third oldest Christian community, The Israelite House of David (also known as Mary’s City of David). This self-sustaining religious commune operated for more than 100 years, funded by business ventures like the Eden Spring Amusement Park and a team of bearded, longhaired baseball players. The team—nicknamed the “Jesus Boys” by some opponents—barnstormed their way across the country in the ’20s and ’30s, selling out rural ballparks with their vaudevillian style of play. Today, Mary’s City of David offers summer tours of the grounds on Saturdays and Sundays from 1 to 5 p.m. If you’re in town July 13, you can see the baseball team, now dubbed the House of David Echoes, play vintage ball following 1858 rules at 1 p.m.—for the equally old-fashioned price of $3 per ticket.